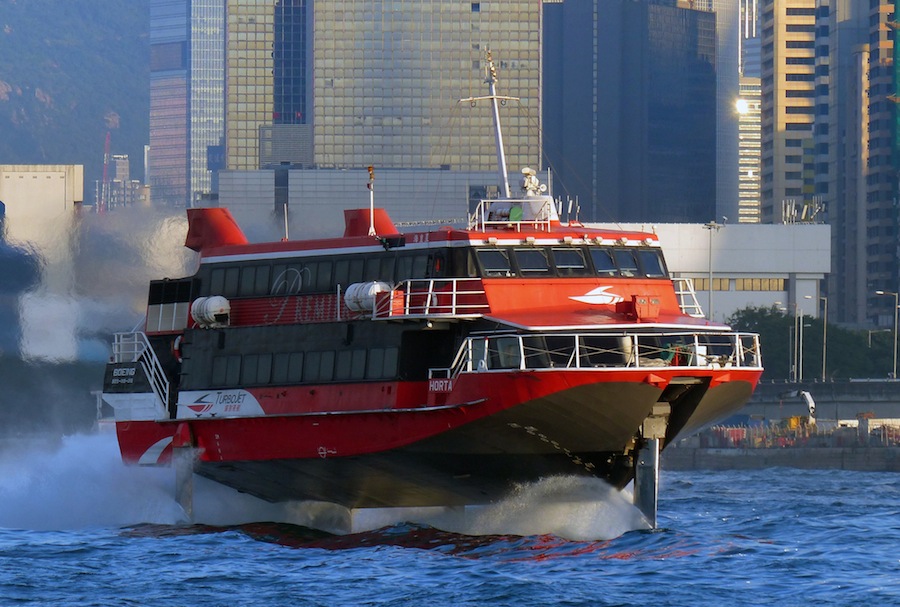 Hydrofoils have always seemed to have so much potential to enhance vessel performance but, except in very limited and specialised areas, they have never made a big impact. This, as an old hydrofoil fan and experimenter, I find disappointing.

However, I have a strong feeling that the potential of hydrofoils is about to be realised on a much wider scale. Modern materials and construction techniques are making hydrofoils much stronger and more practically attached to vessels of many kinds.

Apart from small leisure and experimental craft, very few hydrofoil or hydrofoil-assisted vessels have been launched this century, probably fewer than 100. A few stalwarts, such as Germany and South Africa’s Professor Gunter Hoppe, and his followers, and a cadre of Russian enthusiasts, have persisted with commercial and military applications. Now, however, Formula 1 level yachting developments emanating from the Americas Cup and Trophee Jules Verne are showing the way to more practical opportunities to commercialise hydrofoil technology.

While the builders of large fast catamaran ferries such as Austal and Incat have, for many years, routinely used comparatively small foils very effectively for ride control (read “comfort”) purposes, not much else has been built for the commercial sector. It is exciting, therefore, that Jetfoil licensee and pioneer Kawasaki Heavy Industries recently launched the first Jetfoil ferry in more than twenty years. Apparently, KHI has orders for further craft.

Jetfoils are probably the “purest” of hydrofoil craft. Their disadvantages are that they are expensive to build and run and are comparatively small. However, they are fast at 43-45 knots and very smooth and, therefore, comfortable.

The Hoppe concept of Hysucats has continued to be built in limited numbers for ferry, patrol and research purposes in, mainly, the United States and New Zealand. It is now a well-proven concept that reduces draft and resistance at speed and, therefore, fuel consumption while also providing a generally smoother ride.

The American Hysucat company and New Zealand’s Teknicraft Designs have adapted Professor Hoppe’s concept and commercialised it for leisure and commercial craft, respectively. Essentially, their designs bridge the gap between the hulls in catamarans and trimarans using very sophisticated hydrofoils to provide lift, thus reducing draught, resistance and fuel consumption while increasing speed and ride comfort. Neither company, however, has achieved vast market penetration.

Probably the most impressive recent adaptation of Professor Hoppe’s concept has been Safehaven Marine’s Thunder Child II. This fast, self-righting 23-metre trimaran can be built in patrol boat, rescue boat and yacht configurations. It has obvious and enormous potential.

Back to Americas Cup hydrofoil technological development: We have all seen the foiling catamarans of the last couple of Americas Cup events. That has now been adapted to monohull yachts. More or less simultaneously, French designers have created large monohull and multihull sailing yachts that are both incredibly fast and relatively seaworthy. Some are intended to set “round the world” racing records.

These breakthrough developments, as was shown at the recent 50th Anniversary Conference of the International Hydrofoil Society, have largely arisen from the genius of Seattle-based naval architect and yacht builder Paul Bieker. He developed the amazingly light, yet strong, hydrofoils that these yachts rise from the sea on.

I can see Paul Bieker’s high-tech FRP technology being incorporated in hydraulically raised, lowered and trimmed hydrofoils fitted to quite large multi and monohull ferries, warships, yachts and other craft where speed is required. The ability to practically raise and lower hydrofoils will eliminate the draught problems of traditional foiling arrangements.

As you will learn here this week, the Hoppe and Bieker technologies seem very likely to make hydrofoils much more commonplace on fast craft.


– “These hydrofoil sailing boats are doing everything we want in ferries, patrol and other commercial and military vessels.”

– “Dutch navy officials said that, depending on Zeeland‘s performance following the incorporation of the Hull Vane spoiler, similar installations may also be carried out on other active ships in the fleet.”

– “The knowledge and skills gained in the design of [foiling racing] sailboats can in turn be employed to design efficient high-speed commercial craft.”

FEATURE | The future of hydrofoils

– “…hydrofoils aren’t getting extinct but live on in varying forms.”


“Kawasaki sees the main attributes of the Jetfoil as being the comfort level they provide when operating in a seaway, the short transit time on their route, ability to maintain high service availability even in rough seas, as well as their safety of navigation…and the low wave wake generated when operating foilborne.”

– “The vessel has high historic and technical significance, rarity value, along with research potential in the worldwide maritime sphere thus making it worthy of preservation with perhaps a return to operational condition.”


– “…though a combination of lightweight construction and the adoption of hydrofoils, a substantially lower resistance could be achieved than a traditional planing boat of comparable capacity.”

Any news or views about hydrofoil craft? Send it through to [email protected] ASAP (between now and December 11) so we can add it to this current edition of Hydrofoil Week!