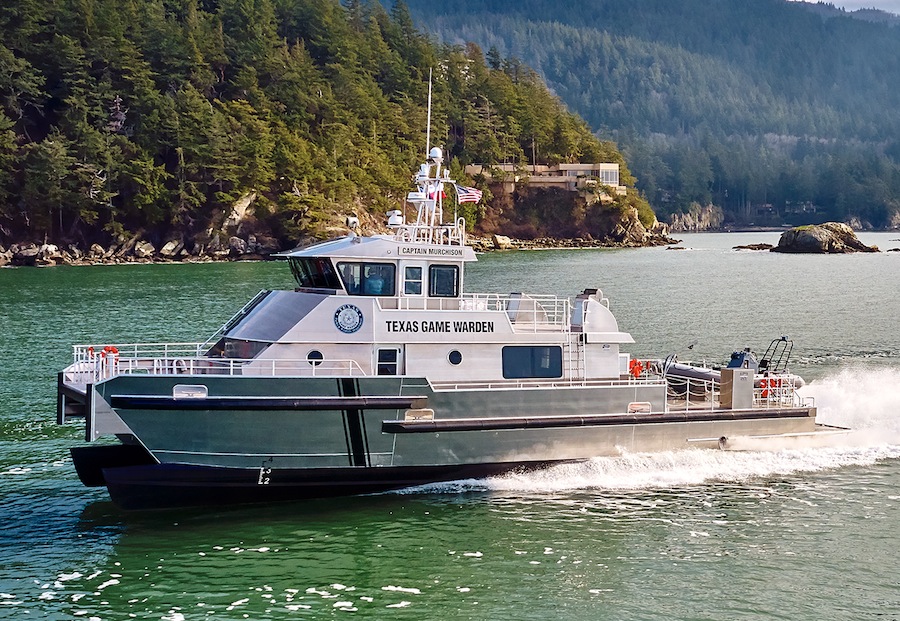 Texas game wardens are the first line of defence in the state’s and nation’s border security initiatives in the Gulf of Mexico. The game wardens needed a vessel capable of operating in adverse sea and weather conditions to fulfil this mission.

This brief was met by the recently-launched, Teknicraft-designed aluminium catamaran patrol boat Captain Murchison. This vessel will serve an integral role patrolling both Texas state and federal waters for the law enforcement division of Texas Parks and Wildlife (TPWD).

TPWD is responsible for patrolling the state waters of Texas, out to nine nautical miles in the Gulf of Mexico. However, TPWD and Texas Game Wardens also patrol an additional 200 nautical miles into exclusive economic zones through a joint enforcement agreement with the National Oceanic and Atmospheric Administration.

Teknicraft developed the extended bow of the demi-hull shape to further enhance the seakeeping characteristics of the company’s signature hull shape. Essentially, the hull shape has not changed, except for the finely shaped piercing bow extensions. 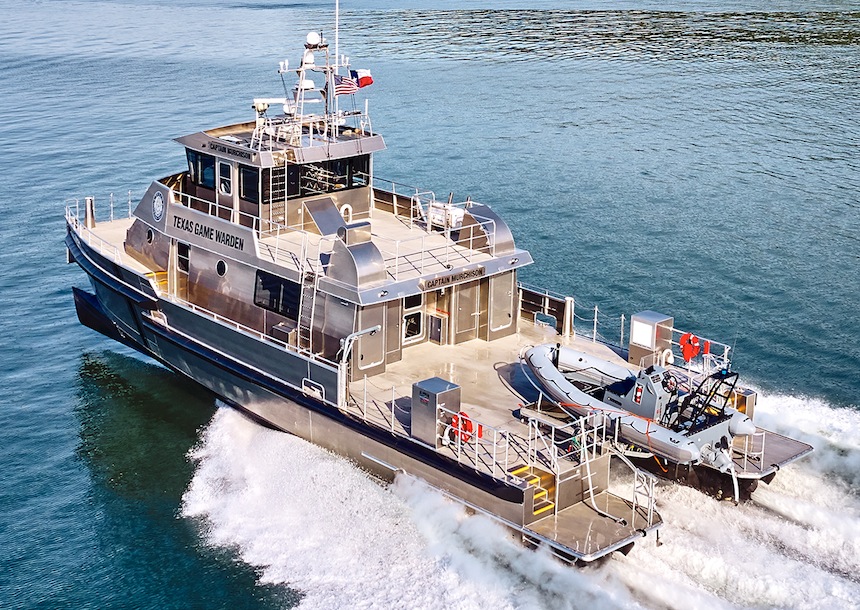 The new bow shape has a number of advantages without compromising on any of the existing seakeeping or low resistance qualities of the hull. The hull extensions are shaped to have very little freeboard, whereby they significantly reduce vertical accelerations in choppy seas whilst also reducing pitching motion.

The extended hull length reduces rolling motions when operating in quartering seas, whilst straight tracking is enhanced in following seas. Together, these characteristics ensure that the seakeeping is enhanced, resulting in a softer ride and more comfort for the crew, particularly in rough seas.

As a result of the reduced pitching motion in choppy seas, the angle of attack of the hydrofoil remains more constant, whereby efficiency is increased, vessel speed variations become less sensitive to seastate, and fuel consumption is reduced.

When operating in calm seas the extended bow is completely free of the surface, ensuring that the low resistance of the Teknicraft hull is not affected in any way. The extended waterline length of the hull increases the displacement speed, whereby the maximum range at low speed is increased by approximately six per cent. 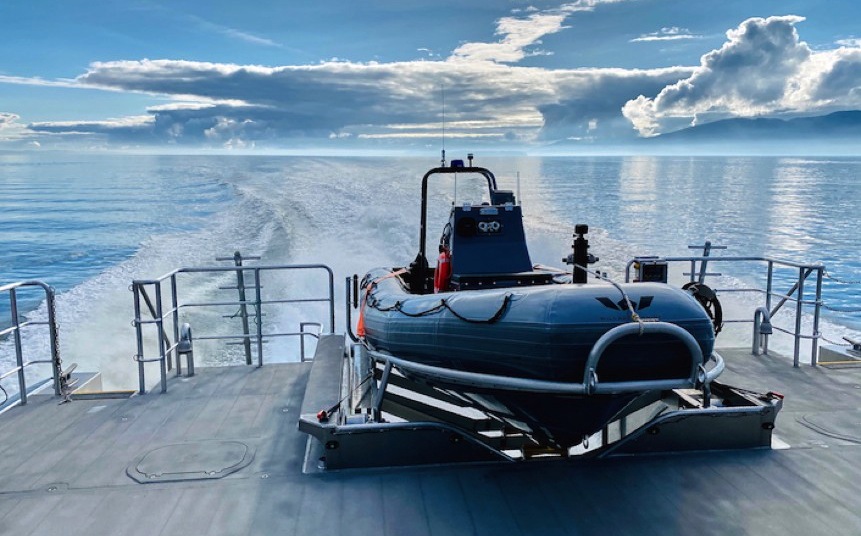 One specific feature is Teknicraft’s new rapid RHIB deployment launching system. This feature was incorporated to increase safety and reduce both the time and manpower needed to deploy the vessels’ rigid hull inflatable boat (RHIB), a six-metre (20’) Willard with a 170hp (130kW) Volvo diesel engine, and features HamiltonJet propulsion.

The system has been specifically designed for catamarans with high tunnel clearance, optimised for rough weather operations. It consists of a linkage system that lowers the RIB into the water at the correct depth and angle for easy launch and retrieval.

The crew safely boards the RIB whilst in it stowed position on top of the deck, when they are ready to depart, the RIB on its cradle is lowered into the water using hydraulic cylinders. This can be done whilst the vessel is stationary, or going along at speed up to 15 knots. When the outboard engine touches the water, it is started, and a moment later the tender is launched and on its way.

At the same time the operator starts lifting the cradle, turns off the outboard engine and the RIB is retrieved up to its stowed position on the deck, above the vessel’s tunnel. At this point the crew can safely embark the RIB, directly onto the deck.

Both the launching and retrieval operations takes less than 30 seconds, are completely safe, and can be done in severe sea conditions. Since the vessel can be cruising along whilst the launching or retrieval takes place, the vessel is far more stable in rough seas than what it would be if trying the same operation whilst stationary. 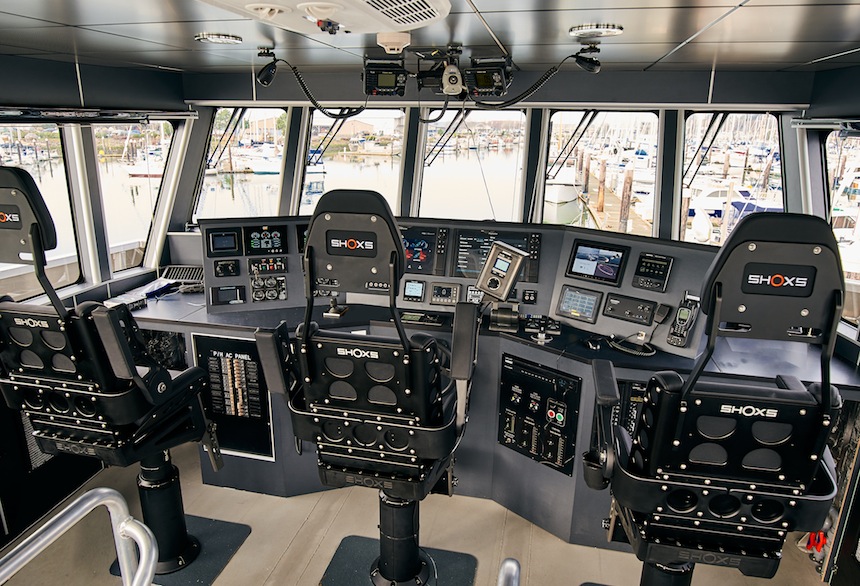 She is the first vessel in North America to feature HamiltonJet’s “advanced vessel control” (AVX) system. The new AVX features include both a station-keeping and a JETanchor positioning system.

Additional vessel features include a DJI Mavic drone integrated to the helm displays, as well as a FLIR M400 XR high-resolution thermal imaging video with tracking to assist with patrol duties in the Gulf of Mexico. 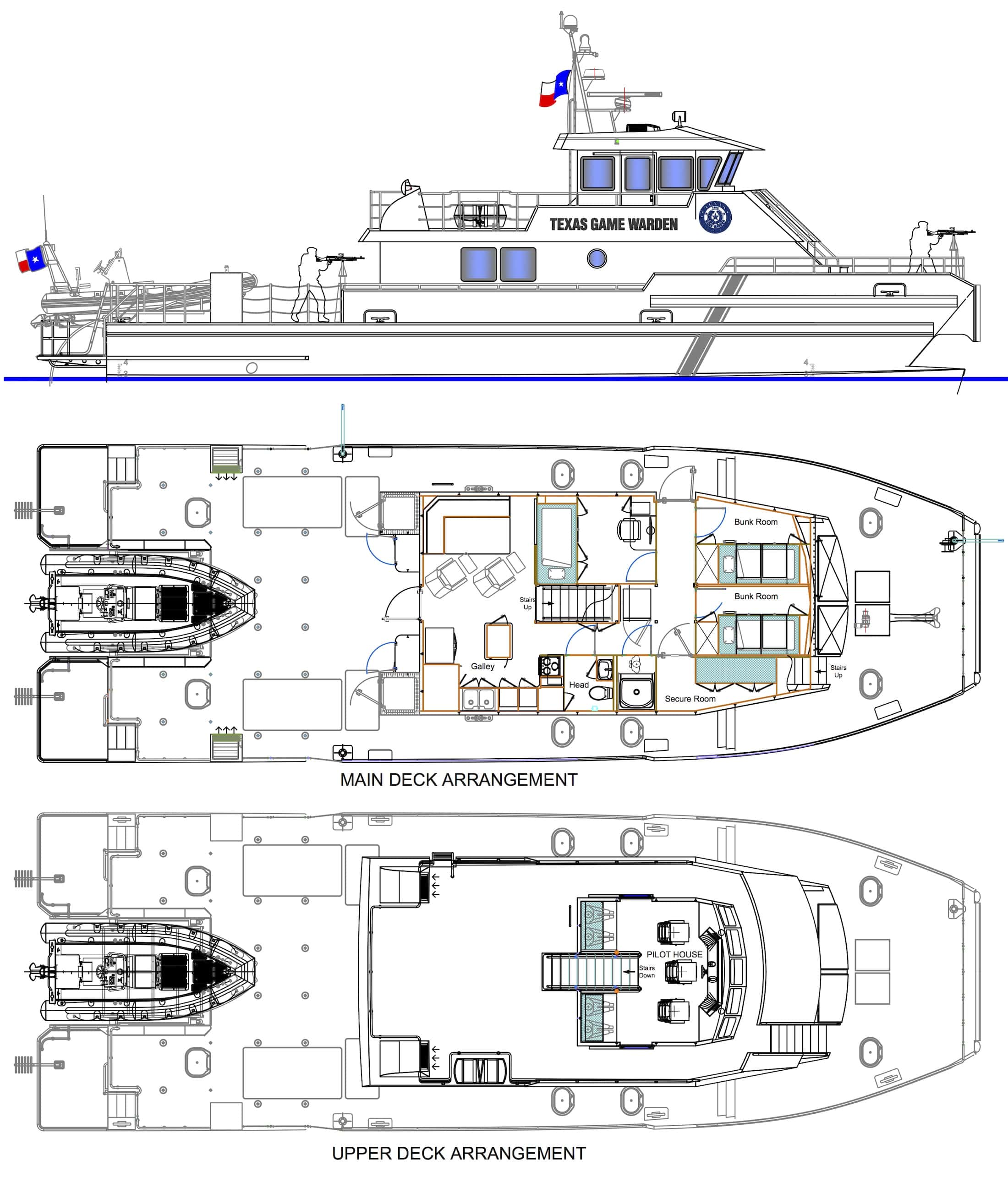