Thunder Child II’s hull design was developed to solve the head sea limitations inherent in traditional catamaran design, where when a sea state exceeds a given size, steepness and frequency, waves, especially in head seas, will inevitably impact on the flat surface of the bridge deck, causing slamming.

She features an innovative hull fusing an asymmetrical catamaran with a wave-piercing mono hull to produce a hull that combines the dynamic and transverse stability of a catamaran with the head sea capabilities of a deep-vee monohull.

The hull design effectively pushes through and splits waves, dampening motions and preventing the flat surface of the bridge deck from ever directly impacting the water surface.

The hull will, by design, fully wave pierce, the level to which is speed dependent, but in general wave height needs to exceed 2.5 to three metres before this begins to occasionally occur.

Thunder Child II has a length overall of 23 metres, a beam of 5.2 metres and a lightship displacement of 24,000kg, featuring a fully cored FRP hull and superstructure in vinylester and E-glass.

Kevlar and carbon fibre is incorporated as reinforcement within the structure, which has been over engineered to provide the necessary strength for heavy weather operation and designed to a six-gee operational envelope.

During development, Thunder Child II underwent extensive sea trials during which she reached a maximum speed of 54 knots, fully tested in a range of trials in varying sea states right up to extreme conditions of Force 10 and in six-metre seas off the Atlantic coast of Ireland.

Another benefit of the design concept is the high transverse stability provided by the catamaran aft sections, which minimise the rolling that traditional-vee hulls can suffer from when operating in rough conditions. Heavy heeling, often as a result of wind or chop influence at the moment of becoming airborne off the crest of a wave can, in extremis, cause high impact loadings when the hull impacts the water heeled over, on what is then, in effect, a flat surface.

The catamaran hulls offer greater initial transverse stability and resistance to wave-induced heel in the first instance, and by virtue of their slim body nature offer less surface area to wave impact in these situations, allowing a softer entry.

Integral to the design is the incorporation of a hydrofoil system. FASTcc ran the design of the Hysucraft foil system and supplied the workshop drawings to foil builder Hydrofoil Manufacturers, which shipped the foil system over to Safehaven in Cork in mid-August 2019. The system is installed between the asymmetrical catamaran hull, the asymmetrical form being particularly advantageous in this respect.

This lifts the hull some 400mm out of the water at higher speeds, allowing the forward monohull section to run mostly dry and clear of the water with very little wetted area, greatly reducing resistance. The monohull sections only come into significant effect in larger sized wave encounters, allowing the hull to cut through waves. The hydrofoil also very effectively damps motions especially in respect of pitching.

Thunder Child II’s hull also incorporates twin transverse steps, which at higher speeds reduce the wetted area on the hull bottom as well as increasing lift and stabilising running trim. The steps, working in conjunction with her hydrofoil, allow Thunder Child II to run at high speed with very low drag and resistance, maximising speed and efficiency. According to Safehaven, at higher cruising speeds of 34 to 40 knots, she has a 20 per cent greater range and better fuel economy than that of a typical planing hull.

The design allows for wider load variations as the monohull section supports a significant percentage of the vessel’s overall displacement, and by virtue of its steep deadrise, buoyancy rises exponentially. This supports increases in displacement, thereby preventing excessive hull sinkage, which on a pure catamaran hull design results in a significantly reduced bridge deck clearance when heavily loaded.

Seakeeping in large waves at displacement speed when inevitably forced to slow down is thus improved, with slamming never occurring on the bridge deck. 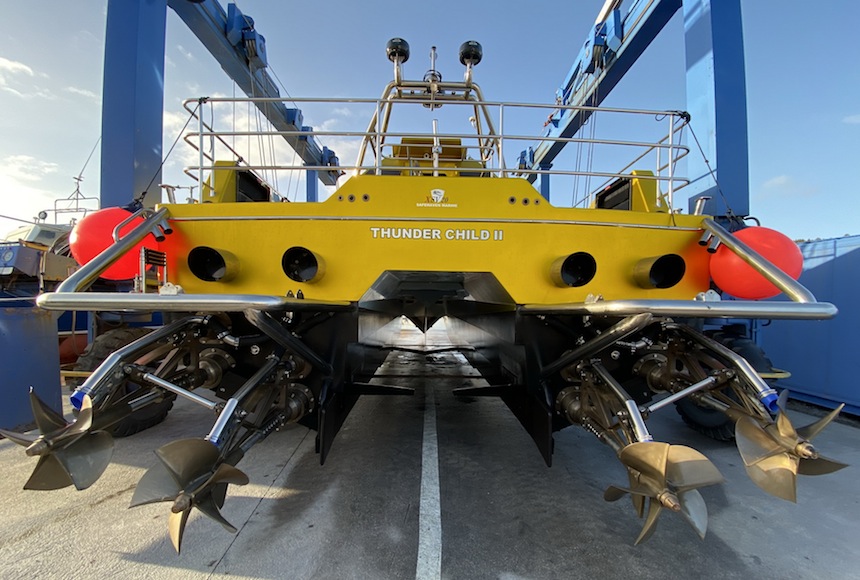 Thunder Child II is fitted with quad Caterpillar C8.7 650hp (480 kW) engines coupled to France Helices SD3L surface drives in a staggered arrangement. This setup provides the desirable redundancy for her planned upcoming trans-Atlantic record attempt, as should one engine fail she will still be able to maintain planning speed.

She is fitted with an 8,000-litre fuel capacity, allowing for a 750nm+ range at her cruise speed of between 32 and 40 knots (depending on fuel load), and is capable of altering her LCG to prevailing sea conditions via a fuel transfer arrangement to a 2,000-litre forward ballast tank. 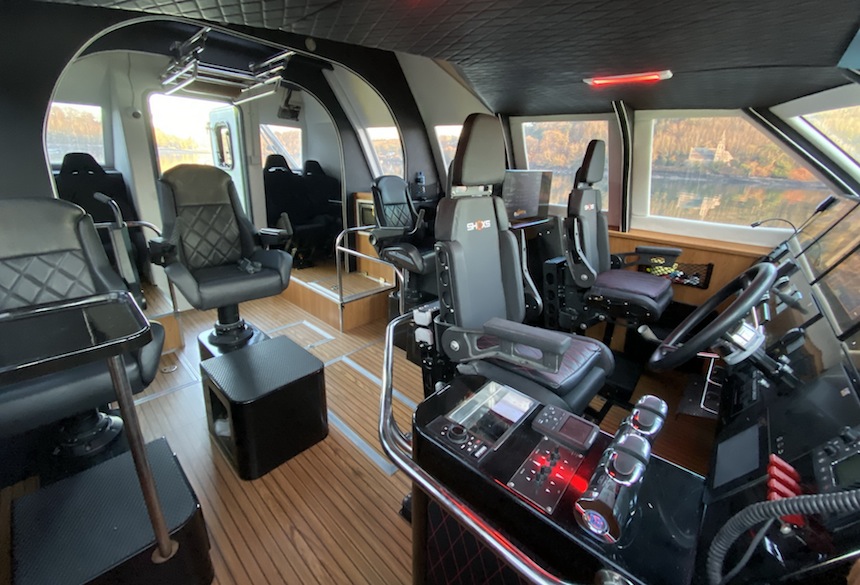 Thunder Child II has been fitted out to a practical and purposeful standard and also to provide a comfortable environment, with her main remit being fast offshore passage making. She has a crew capacity for five, all on military spec shock mitigation seating supplied by the Canadian company SHOXS, with four additional reclining suspension seats aft in her main cabin for passengers.

A basic galley is also provided aft in the spacious main cabin fitted with sink, 240V hob, microwave and fridge. Her lower forward cabin offers a comfortable living area with full sleeping and live-aboard facilities for her crew featuring five berths in four cabins, including a master’s cabin.

The design has a high level of survivability, with multiple watertight compartments complying with commercial standards of safety and engineering, and she also has EU RCD Category A certification.

A full suite of electronic navigation equipment is integrated with four 19” monitors in a “glass helm” design for radar, GPS chart plotting, VHF, forward-looking sonar and a FLIR thermal camera. A dedicated engineer’s station allows monitoring of the engines and multiple-angle CCTV coverage of the craft.

Satellite communication is provided by Sailor ensuring the crew can be in contact in remote regions above the Arctic circle. Thunder Child II also carries a three-metre RIB. 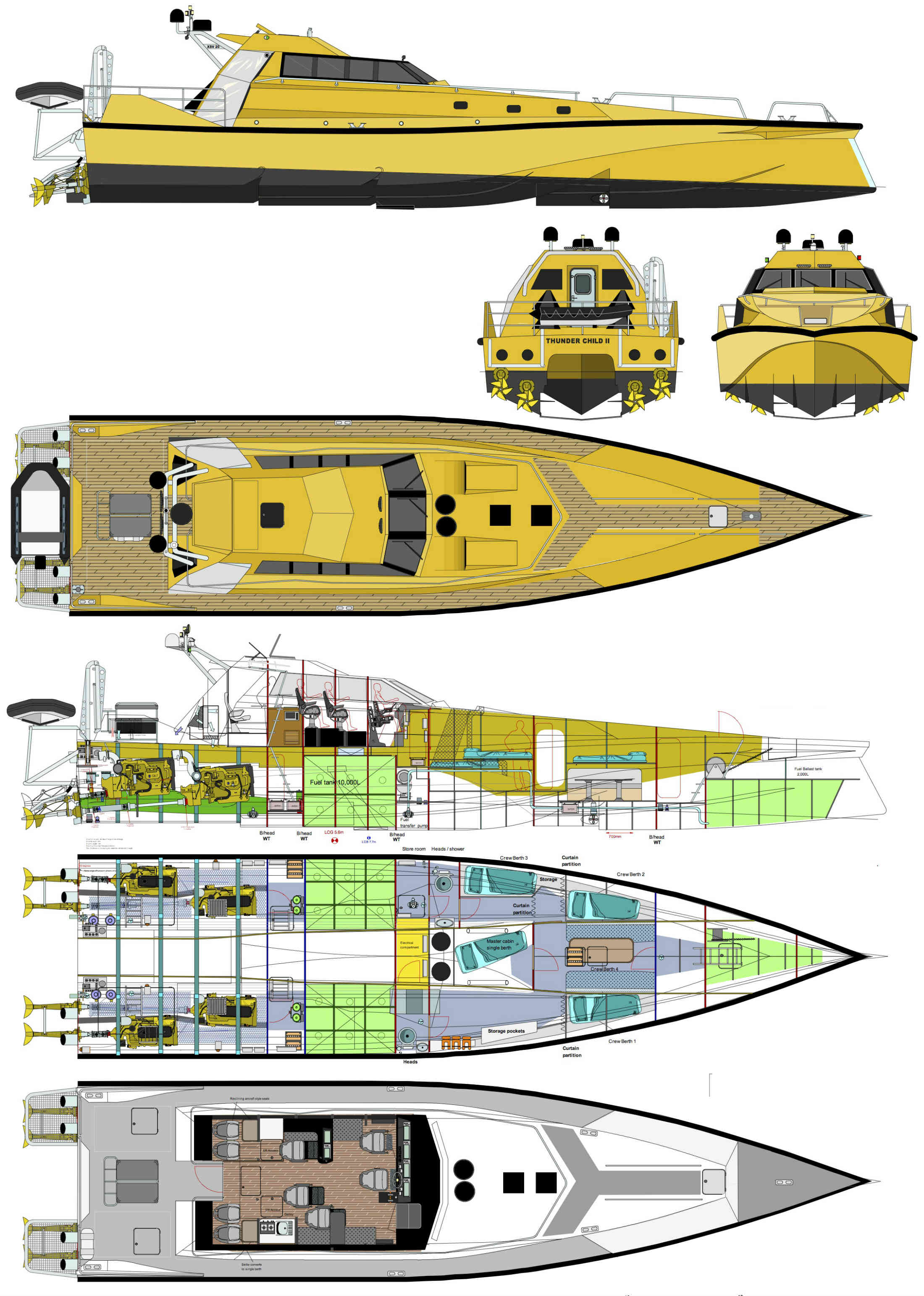