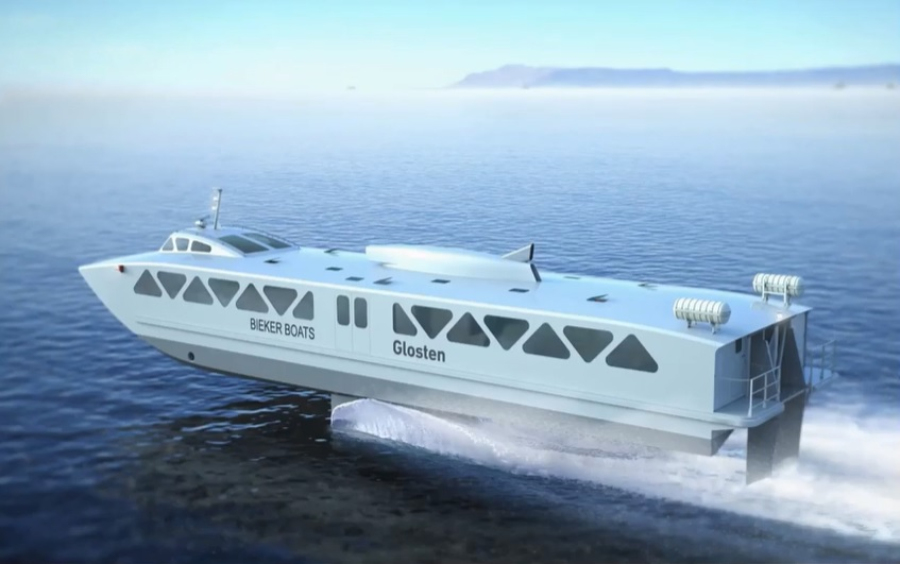 During the opening session of the International Hydrofoil Society’s 50th Anniversary on-line conference during October, Paul Bieker of Bieker Boats in Seattle gave a presentation on his experience with the design and construction of a range of recreational and sporting sailing hydrofoils. However, he also briefly reviewed a concept passenger hydrofoil currently under development in association with Glosten, also based in Seattle.

Paul indicated that having spent several years in Bermuda tuning high performance carbon fibre foiling racing sailboats which were able to operate foilborne in a breeze as little as eight to 10 knots, he recognised how efficient such craft have become when considering the thin profile high aspect foils that can now be adopted thanks to the strength of carbon fibre.

To be competitive in sailing craft, there is a strong drive to achieve high efficiency foil configurations. The knowledge and skills gained in the design of such sailboats can in turn be employed to design efficient high speed commercial craft.

Paul Bieker and Glosten are therefore developing a concept 150-passenger hydrofoil ferry of approximately 48 tonnes displacement. This capacity is at the upper limit of USCG Subchapter T and as such below a threshold for which more extensive regulations and corresponding additional systems would apply. 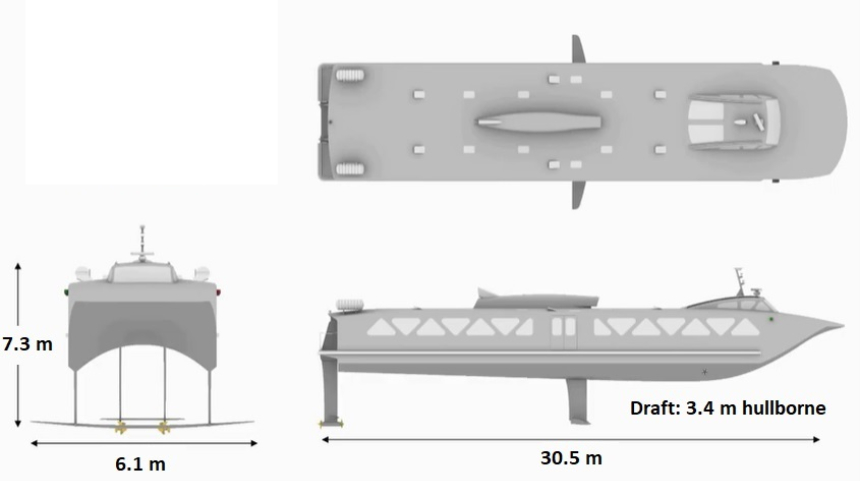 While powering analysis for the concept has been based on a 35-knot cruising speed, requiring around 1,030 kW installed power, Paul noted that consideration is being given to reduce the design cruising speed to approximately 30 knots as this would require significantly less power and would provide greater margins against cavitation for the design of the propellers.

Glosten are taking the lead on the propulsion system and regulatory related work. Also providing technical support are Len Imas and Tom Speer.

The baseline propulsion system for the ferry would be a pair of diesel engines driving propellers via bevel gearing in a Z-drive configuration. This could achieve a range of 215 nautical miles at 35 knots cruise speed.

However, consideration is also being given to an electric propulsion configuration with the same total displacement. In this configuration, retaining 1,030 kW of power and 35 knots speed, initial calculations suggest a 12 nautical miles range could be achieved between recharging of batteries. This range, while modest, still suggests such an electric drive fast ferry could be viable on short distance routes such as are available in Puget Sound in Washington state.

With further improvements in battery capacity and efficiency, or a reduction in cruise speed, the endurance would naturally increase.

Paul briefly presented wave wake predictions for the craft running foilborne and indicated the wake to be very low.

The vessel’s hull is constructed using room temperature-cured, resin-infused carbon fibre with foam cores above the waterline. This results in significant weight savings over the lightest aluminum construction.

The struts and foils are constructed of high temperature-cured carbon fibre laminates, achieving the same strength and stiffness of high strength steel at 20 per cent of the weight. These advancements in foil design and manufacturing can be seen in the latest America’s Cup foiling yachts.

The design also incorporates a foil collision energy absorption system designed to dissipate the energy during contact with a submerged object, thus improving comfort for passengers ancrew. Positive lift is maintained as the foil rotates upward during an impact, greatly reducing the overall acceleration experienced by the passengers.

Glosten further claims comfort is enhanced as the ferry flies over waves, rather than through them. Transit times are also unaffected by rough water as speed (and fuel efficiency) is maintained.

Around US$372,000 in US federal funding has been secured for the further development of the concept and those are expected to become available towards the end of 2020. This funding is provided via the Department of Transportation’s Accelerating Innovative Mobility initiative while cash and in-kind contributions of US$100,000 and US$139,000, respectively, were supplied by key project partners including the Washington State ports of Bellingham, Skagit County, and Anacortes.

The ferry will be operated by Kitsap Transit between urban centres and suburban and rural communities throughout Washington State.