MAN Engines has released its new modular exhaust after-treatment system (EAT), which meets the requirements of the US Tier 4 emissions standard for workboats.

According to MAN, this system stands out due to its flexibility and compact design, which are an advantage in the varied installation situations on workboats, in which space is at a premium. The engineers of MAN Engines achieved this result by making the components freely placeable, allowing for an enormous range of variants of the EAT. This gives boat designers access to flexible system integration options with a high component density in a myriad of different installation situations.

The essentially maintenance-free exhaust after-treatment system is also a particular benefit to end users: it allows the engine to be designed with a very favourable characteristics curve, so that the same performance can be achieved with lower fuel consumption. Thanks to the SCR catalyst being coated with vanadium, it is resistant to sulphur as well, and can therefore also be used in countries where only low-quality diesel fuel is available. 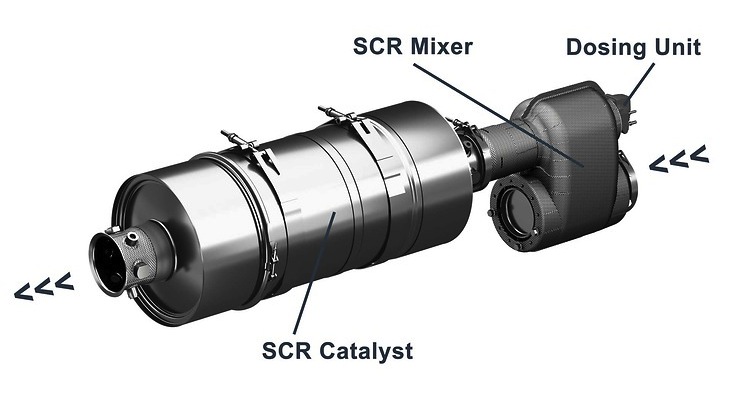 The modular exhaust after-treatment system is made up of an SCR (selective catalytic reduction) catalyst, an SCR mixer and a metering unit for the 32.5 per cent aqueous urea solution. This is injected directly into the exhaust train, in order to ideally convert the accumulated nitrogen oxides (NOx) into water (H2O) and nitrogen (N2). By reducing the system to just a few components, it is an easy and simple, but nevertheless robust exhaust gas aftertreatment system.

Airless injection of the urea solution saves yet more space and technical expense, as well as further reducing the installation volume of a system with an already very flexible installation.

“Our MAN engines need no more than an SCR catalyst combined with optimised combustion to comply with the US Tier 4 standards. We have no need of a heavy and space-hungry diesel particulate filter or oxidation catalyst, which would also involve extra costs,” said Jürgen Haberland, Director of Sales Engines at MAN Engines and Components in Pompano Beach, USA.

Man Truck and Bus has been successfully using exhaust gas aftertreatment via SCR systems since 2006, with many hundreds of thousands of units in use in their own large-scale series trucks. With the modular EAT, which was first presented in the field of agricultural technology in 2015, MAN Engines is also drawing on installation expertise and experience with series engines and V engines from the industrial sector. Successful field trials for workboats are already in progress.

The US Tier 4 emissions standard applied from October 1, 2017 for all workboats flying US flags with a power output of more than 600kW per combustion engine. For diesel engines, the legislation includes a reduction in nitrogen oxides (NOx) of nearly 68 percent to 1.8 g/kWh, as well as a reduction in particulate emissions of nearly 64 percent to 0.04 g/kWh.

The legislation stipulates that, following a grace period, all workboats built after October 1, 2017 with a power output of more than 600 kW (816 hp) per engine must be equipped with an exhaust after-treatment System. With its 6-, 8- and 12-cylinder engines, MAN Engines is therefore offering a range of power outputs from 323 to 1,213kW for the US Tier 4 emissions standard. As part of this, all 12-cylinder engines in the D2862 series are fitted with the modular EAT. This can be incorporated into projects from now on.