BOOK REVIEW | Alfred Thayer Mahan – The Man and his Letters 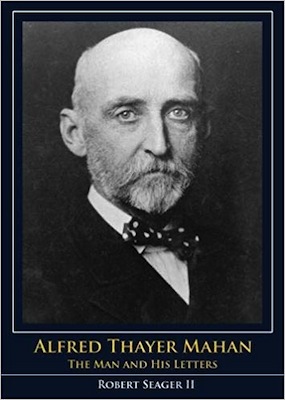 As far as the United States Navy is concerned, Mahan is right up there with Sun Tzu, Machiavelli and von Clausewitz as a military, particularly naval theorist. He is there regarded as being significantly more important than Germany’s von Tirpitz or Britain’s father of modern naval warfare, Admiral Jacky Fisher.

Modern American naval historians practically worship the man and accord him great credit for the US Navy’s impressive victories in the Pacific in World War II. While deserving of considerable fame and respect, such hero worship can be taken too far. That is where this valuable reprint of an excellent 1977 original comes in. Trawling through Mahan’s 2,900 surviving letters, his diaries, his 20 books, 137 articles and numerous speeches, the author presents us with an excellent analysis and appreciation of Mahan the man.

Seager’s biography is very much a “warts and all” one. He certainly does not shy from Mahan’s many deficiencies of personality, character and competence. He thus presents a seemingly and probably very accurate picture of the whole man. He puts in proper perspective the real influence and achievements of his subject.

This is a very valuable book for anyone interested in naval history, doctrine, tactics, strategy, theory and philosophy whether professionally or intellectually or both. The Naval Institute Press is to be congratulated for re-publishing this very important book in a more affordable paperback version.