Given the ongoing maritime security challenges that the Greater Caribbean continues to face, these confidence and interoperability-building exercises continue to be very important.

The first two phases of Tradewinds 2018 took place in Saint Kitts and Nevis and then in The Bahamas. Phase III, a seminar among regional leaders to discuss the results of the first two phases, occurred from July 17 to 19 in Miami, Florida. The participating nations included the majority of Caribbean states, in addition to Canada, Mexico, the US and extra-hemispheric states like France, the Netherlands, and the United Kingdom.

As for aerial platforms, these included AS365N3 Panther and UH-60 Blackhawk helicopters. As SOUTHCOM explains, “this year’s focus is on countering transnational organised crime in the region,” apart from other priorities like improving disaster response. Operations at sea including procedures to intercept a non-compliant vessel, and live firing exercises with deck-mounted weapon systems like .50-caliber machine guns and 25mm cannon.

In general, Caribbean governments and security forces have generally had a positive attitude toward these maneuvers. For example, Prime Minister of St Kitts and Nevis and Minister of National Security the Honourable Dr. Timothy Harris reportedly stated, “I have been assured that we can therefore expect training components or injects that reflect real world scenarios so that in the face of a real threat, our security forces and emergency response personnel will be able to coordinate seamlessly and in a manner and time that both meet international standards.”

The Caribbean’s maritime security challenges are very diverse. They include drug trafficking (Washington’s primary concern), weapons and human trafficking, illegal fishing, not to mention search and rescue operations. These crimes have been extensively recorded, but it is worth noting that some occurred, somewhat ironically, at the same time that Tradewinds was taking place.

For example, in mid-June Her Majesty’s Bahamian Ship (HMBS) Durward Knowles, a patrol vessel, intercepted a 15-metre Dominican fishing vessel that was poaching in Bahamian waters. Around the same time, the Dominican Republic chased a speedboat until it stopped in the coast of Pedernales province.

Aboard were 351 packets which apparently contained cocaine. A month earlier, in early May, it was the Jamaican Defense Force’s turn to catch a vessel at sea, as a ship reportedly intercepted off the coast of Westmoreland had “764.9 pounds of compressed marijuana.”

Even more, piracy is becoming a noteworthy problem: in 2017 the organisation Oceans Beyond Piracy (OBP), “recorded 71 incidents in Latin America and the Caribbean. Most incidents in the region occurred in territorial waters, with anchored yachts being the primary targets for attackers.”

There were also 16 attacks against tankers and three fishing vessels, among other types of ships. A map prepared by OBP shows a cluster of incidents off the coast of Belize, Colombia, Venezuela as well around the islands of Grenada, Saint Lucia, and Saint Vincent and the Grenadines. 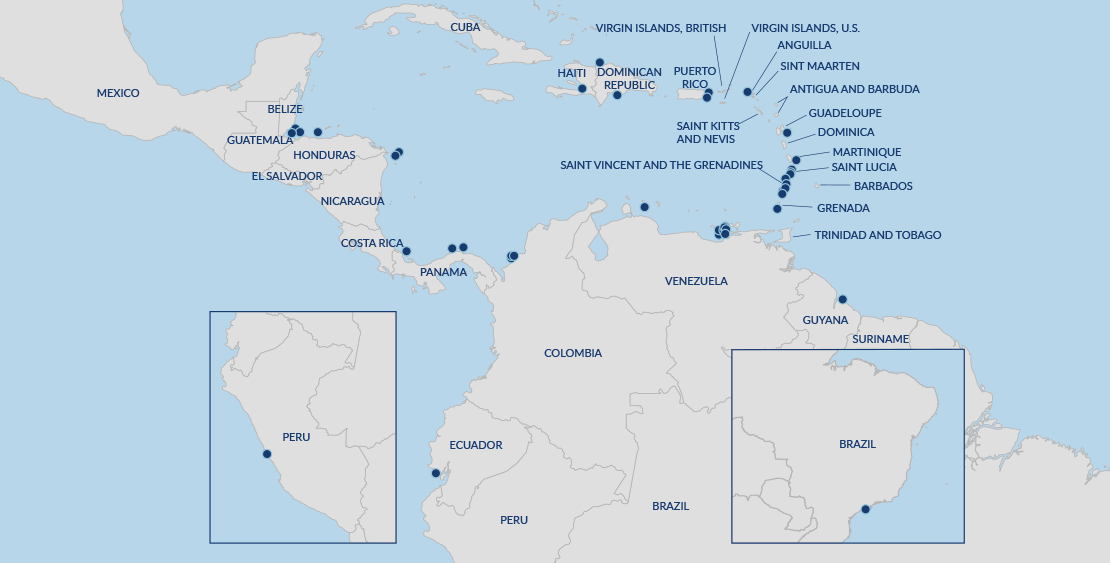 Map of 2017 incidents by Oceans Beyond Piracy.

Not counted in the report was a late-April 2018 incident along the Guyanese-Surinamese border, where pirates attacked a group of four fishing boats, robbing the crew and killing several of them.

The status of Caribbean maritime forces

Some Caribbean defence forces have attempted to upgrade and expand their maritime fleets in order to take better control of their exclusive economic zone (EEZ). For example, the Royal Bahamas Defense Force (RBDF) has acquired several vessels constructed by Damen Shipyards via the Sandy Bottom Project. These include patrol vessels as well as one auxiliary transport, Ro-Ro vessel.

Similarly in 2016 the Jamaican Defense Force (JDF) upgraded its fleet by receiving two new patrol boats from Damen in 2017. That same year, the JDF received two 12-metre Safe Boats and two 11-metre Boston Whaler vessels, donated by the US.

Moreover, the aforementioned examples also highlight the continuous reliance on extra-regional allies  for donations in order to expand the naval inventory of these defense forces.

Mr Ehrlich mentions that greater regional cooperation and interoperability is needed in order to make up for a limited number of platforms and personnel, and in order to decrease the region’s dependence on SOUTHCOM and the US Coast Guard. The Mexican Navy could step up its presence in the Caribbean to help its partners with maritime security, but unfortunately the Mexican Navy seems to be more focused on its Pacific territory.

As a final point, it is important to highlight the troubling scandals regarding regional defense officers that are caught in cahoots with criminals. For example, Colonel Rafael Collado Ureña of the Dominican Republic’s Army, was arrested in mid-2017 in Puerto Rico as he was about to carry out a sale of 12.9 kilograms of cocaine. Around the same time, a member of the Jamaican Defense Force was arrested at Kingston airport as he tried to board a flight to Toronto with 2.8 kilograms of cocaine.

Exercise Tradewinds 2018 recently concluded, and hopefully the manoeuvres and training exercises that Caribbean forces carried out with counterparts such as those from Canada, Mexico, the UK, and the US, will be helpful for their future patrol and interdiction operations in their respective EEZs. We can also hope that these ongoing exercises, as well as generally cordial regional diplomatic, trade and defense relations, will lead to greater interoperability between regional forces.

While Tradewinds 2018 can be regarded as a success, these manoeuvres will have limited positive impact if Caribbean defence forces do not obtain additional funding for new aerial and naval platforms given the size of the Caribbean Sea. Even more, scandals among security personnel, namely their involvement in criminal activities, stain the reputation of regional defence forces and limit the success of any training operations.

Article reprinted with permission from the Center for International Maritime Security

Wilder Alejandro Sanchez is a researcher who focuses on geopolitical, military and cyber security issues in the Western Hemisphere.