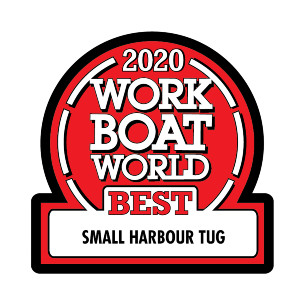 Renowned Turkish builder of Robert Allan Ltd-designed tugs, Sanmar Shipyards usually builds for export. This time, however, it has built a delightfully decorated tug for its own fleet to work locally in Izmit Bay.

Apart from its very “un-tuglike” decoration, this particular vessel sports a number of interesting and very practical innovations. At only 24 metres LOA, it has a hefty 70.4 tonnes of bollard pull and a speed of 13.3 knots.

Further, it is fitted with hydro-mechanical hybrid drive units that offer practically the ultimate in handling flexibility. The variable transmission system works effectively like controllable pitch propellers but with less complexity. It will be interesting to learn how this very promising development works in practice.

“She is the world’s first advanced variable drive (AVD) tug,” Sanmar told Baird Maritime, “utilising a design based on technology from Caterpillar. We have designated the vessel as a hydromechanical hybrid tug, and it boasts environmentally-friendly credentials as a green solution for the marine industry. Thus, the vessel has been painted with celebrated artist Andy Warhol’s ‘Flowers’ design to symbolise connecting natural life and mechanical art.”

Sanmar decided that a 24-metre tug design by Robert Allan Ltd would make an ideal platform for validating the use of AVD technology. This was due to the design being an optimised and compact harbour tug with 70 tonnes of bollard pull and FiFi1 capability.

“We somewhat broke away from convention by equipping the tug with Caterpillar 3512C main engines instead of the 3516C we normally install in those from the same series. By means of a planetary gear system, propeller speed can be adjusted independently of the main engine speed, with different work modes including ahead and astern shifting performances.”

The most notable advantage offered by the AVD system is its being an environment-friendly technology that also guarantees lower operating costs, allowing Sanmar to market it as a “green” solution for interested clients. As explained by the builder, the technology enables vessels enjoy improved fuel efficiency of as much as 16.5 per cent thanks to the ability to operate at more efficient load points and to utilise smaller auxiliary engines at low loads.

As for the cost aspect, AVD ensures that motors and related components are smaller than their counterparts in traditional drive systems and therefore guarantee lower costs, even compared to battery-electric hybrid systems.

“Also, the ability to run with the main engines off further reduces service and maintenance costs,” Sanmar explained. Specifically, maintenance costs are expected to be reduced by as much as two-thirds while the interval between engine overhauls can be four times that of a normal period.

The development of Bogacay XXXVIII aligns well with Sanmar’s own growth strategy, which focuses on addressing customers’ desire to better safeguard life and property, protect the environment, and pursue sustainable business objectives.

“Our vision of ‘building for the future’ and a mission emphasising ‘moving forward with technology’,” the company told Baird Maritime, “has firmly taken root in our organisation’s culture.”