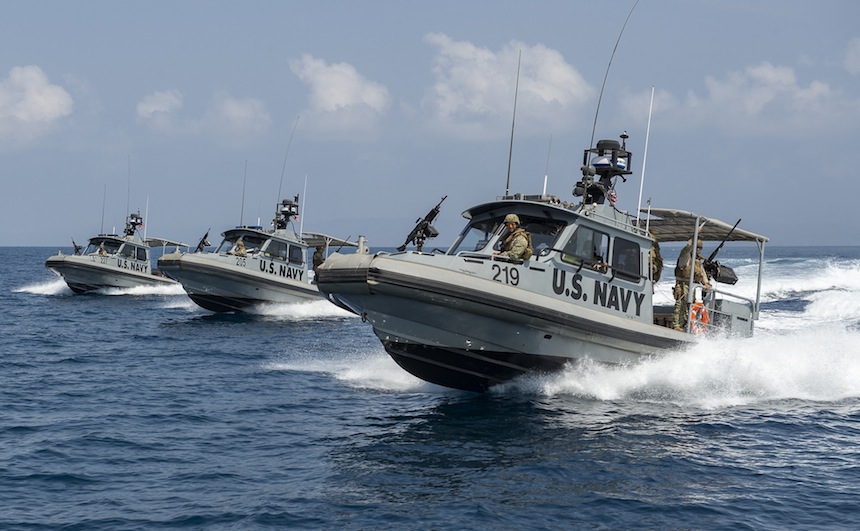 It seems as though there has been a continuous boom in the maritime security sector ever since the New York Twin Towers terrorist attacks in September 2001. While it was an aviation act, it certainly had the very pronounced effect of awakening the world to the reality of how vulnerable it is to terrorism generally.

Obviously, there have been advances and declines in the sector over those 18 years but the overall trend has been fairly relentlessly upward and onward. An uncertain world, then, has been generally very good for that particular market sector.

Simultaneously, the world has seen distinct growth in the incidence of piracy, people smuggling, drug smuggling, fisheries poaching, illegal immigration, waterfront and vessel fires, oil spills, maritime accidents and ongoing examples of small wars. In other words, there has been, seemingly, a never-ending list of activities requiring the services of patrol, assault and rescue boats and warships.

Generalising all of the above as maritime security “craft”, rather than “assets”, as too many military writers refer to them, many have been launched since 2001. Most of those, of course, are still in service. Most were well built and they were designed to be adaptable. They also, generally, must have been well handled and maintained.

The trend, as always with mostly government owned craft, is ever larger. Bigger, clearly, is better, more seaworthy, more comfortable and more adaptable as far as bureaucrats are concerned. Of course, logically, that usually means more expensive. That has been good for the industry.

There are other trends. For example, towards autonomous (meaning unmanned) operations and for more multi-purpose roles. A very recently launched Robert Allan Ltd-designed, 16-metre autonomous fire/rescue boat is a classic example of both trends. The Israelis and Americans are developing autonomous surveillance and assault/attack craft, including small submarines in the case of the Boeing Aircraft Corporation, as, almost certainly, are other nations.

Police and coast guard patrol vessels have always been very multi-purpose having both anti-crime and search and rescue roles. Fisheries patrol boats are often called upon for other activities including scientific research.

At the big, warship, end of the size spectrum, vessels are becoming increasingly complex electronically to the point where some recent notable cases suggest that human thinking ceases. Obviously, that is largely a training and discipline problem, but perhaps some reduction in the obvious over-reliance on electronics may be in order. Perhaps, too, there should be more thoughtful training and less mindless drilling. Here, as is so often the case, the maritime world could learn much more from aviation.

Costs are ever increasing and manpower ever harder to recruit so there will have to be considerable thought given to those factors. Vessels may actually have to become smaller, simpler, more multi-purpose, and, perish the thought, less expensive.

On the vital subject of costs, traditional government acquisition procedures generally contribute significantly to the costs of maritime security craft. Those procedures are often clumsy, corruption vulnerable, constantly requiring “variations”, ponderously slow and very difficult for commercial vessel designers, builders and equippers to deal with. There have been several examples recently that I am aware of where commercial builders simply refused to tender for what appeared to be very lucrative government projects. Dealing with governments, they informed me, is simply not worth the trouble.

Despite that increasingly obvious problem, vast numbers of excellent new maritime security craft continue to be designed and built. Considerable innovation continues to be shown in terms of design, construction and equipment. Much of that has useful application across the wider maritime industry. Out of the destruction of war have often arisen some of mankind’s most valuable developments.

Regular readers of www.bairdmaritime.com and its predecessor magazines will be very well aware of the rapid pace of development in the maritime security sector over the past couple of decades. This Maritime Security Week contains a broader overview of the latest developments in the sector. We at Baird Maritime trust that you find it useful and informative.