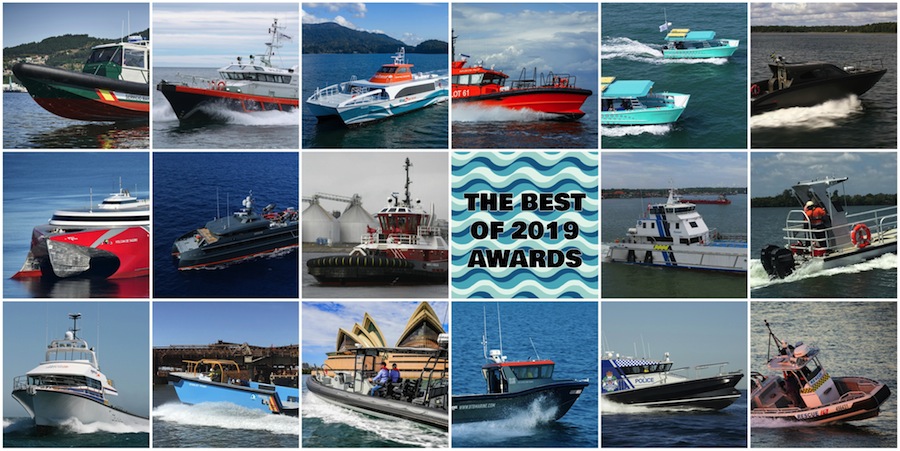 Welcome to the Baird Maritime “Best of 2019” awards. When it came to deciding the winners for 2019, we again turned to the blueprint originally devised seven years ago. With only minor tweaks and improvements, the judging criteria have largely remained unchanged.

For the best marine equipment suppliers, market success and sales remain the chief guiding principle, based on the frequency we see the equipment in specification sheets provided to us for our vessel reviews.

It continues to be our belief that quality of product and degree of service and after sales support are all intrinsically tied to market share and sales. After all, in this industry, one does not gain dominance through mediocrity.

For the vessels, we again utilised the same slightly subjective mix of innovation, styling, finish, design and build quality first implemented in 2012.

Other benchmarks considered include feedback from the clients and overall market trends and evolutions – is the vessel or product a daring new proof-of-concept, or a classic refinement of a well-established category, for example?

Another fascinating year in the global workboat market has just passed. In terms of innovation, quality and styling, workboats have, as always, become ever better and better.

Other notable trends are that the gradual move eastward has continued with more Asian built vessels reviewed than ever before. There is also more, as the chefs describe it, “fusion”. Boats designed in Australia, the United Kingdom and Europe are increasingly being launched from Asian shipyards. Asian designers, too, are gaining a greater share of the work.

As well as for design and construction, the market for engines, propulsion systems, electronics and other gear is becoming increasingly global. New vessels are increasingly being built both on time and on budget, a very encouraging trend that highlights the strong competiveness that is now a feature of our industry.

The ferry and tourist vessel sector has been in distinct uptrend although it has largely been confined to about a dozen very productive and proven builders. They increasingly dominate the whole global market for such craft. Their vessels steadily improve in every respect: quality, styling, economy, safety, seaworthiness and speed. They represent ever better value.

Offshore service vessels have been hard to find for yet another year as that grossly overbought sector continues to struggle in an ongoing oil and gas industry downturn.

A particularly encouraging sector was that of fishing and aquaculture boats. There have been more of them and they are distinctly bigger, better and much better equipped than their predecessors. Productivity and economy are the key words there as, in reality, they are in all sectors.

The patrol, pilot and rescue craft boom has continued practically unabated since 9/11 in 2001. The pirates, terrorists, poachers and people smugglers continue to try on the rest of us and have to be expensively countered. They continue to be a practically global problem that has benefited our industry considerably. As in the other sectors, the resulting boats simply become better and better each year.

Globally, the tug sector has maintained its strength despite the fairly widespread shipping slump. As always, the leading designers and builders keep improving their products to previously unimaginable levels. As the ships they serve get ever larger, tugs have to become more powerful and versatile. The tugs described here are the latest and greatest of their type.

Come back every day to see which vessels and companies have won awards!

2019 was a very interesting year for new ships and boats in Australia and New Zealand. While there have been fewer new vessels built, you will no doubt have noticed the size, quality and complexity of the vessels reviewed has increased significantly. So too, inevitably, have their prices.

There have been more ferries and tourist vessels and they, too have tended to be of higher quality and more stylish. Their designs are increasingly innovative and the vessels more attractive and elegant. Their styling is an important factor in their owners’ marketing programmes. Simply put, better looking boats attract more passengers and at higher prices.

The oil and gas and offshore and port construction sectors have been quiet, and this cyclical downturn will, almost certainly, continue into 2020 and potentially even further.

Patrol, pilot and rescue craft have seen a surge in deliveries from right across the size range. Again, there has been a definite lift in overall quality of all the vessels reviewed.

A most encouraging sign has been that, after a very long drought, a number of fishing and aquaculture boats have been launched. All have been particularly impressive craft showing distinct improvements over their predecessors.