Vyborg Shipyard of Russia’s state-owned United Shipbuilding Corporation has handed over the first of four vessels to be built under the new Project KMT01 series of ice-class factory freezer trawlers.

Classed by the Russian Maritime Register of Shipping (KM), Barentsevo More (“Barents Sea”) was designed by the country’s Marine Engineering Bureau in cooperation with Norwegian naval architecture firm Skipsteknisk. The vessel is equipped for both bottom and pelagic trawling of various species of fish and shrimp and is also capable of manufacturing fish products that include fishmeal, fillets, fish oil, H&G products, and canned products, thanks to a highly automated onboard plant.

Barentsevo More and its three sisters are variants of a commercially successful factory freezer trawler design that had originally been developed by Skipsteknisk for operation in Arctic waters. The Project KMT01 vessels retain the original trawler’s moulded beam of 17 metres and its freezer hold capacity of 2,500 cubic metres allowing a freezing capacity of up to 120 tonnes per day. However, there are noticeable differences from the Skipsteknisk design such as a greater overall length of 86 metres compared to the original vessel’s LOA of 80.25 metres. Among other things, the stretched hull allows Barentsevo More and its sisters to accommodate nine additional vessel crew and fish processing personnel for a total of 49 personnel. 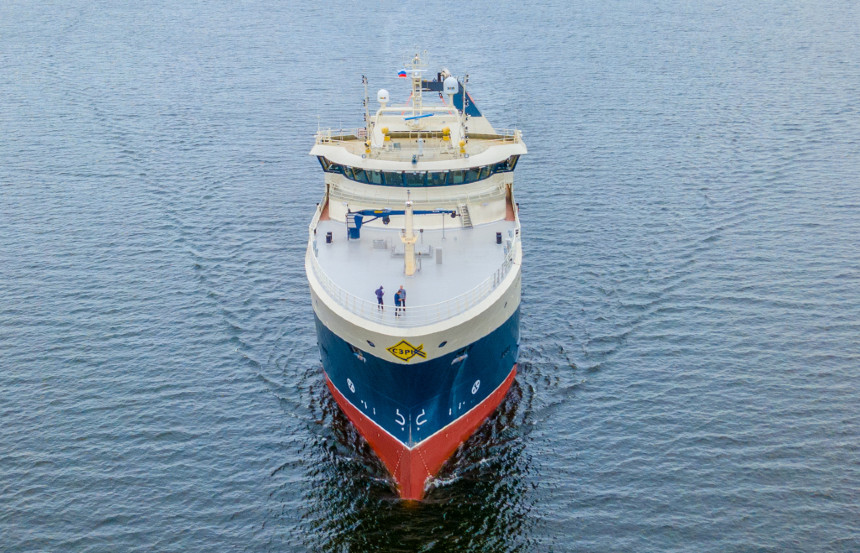 The new trawler has also been updated to Ice3 class with an option of hull strengthening to Arc4 class to enable operations in Arctic waters for extended periods. To ensure that the indoor climate is comfortable enough in those environments, a Heinen and Hopman HVAC system has been installed to provide an interior air temperature of 22 degrees Celsius even as the air temperature outside the vessel drops to -15 degrees Celsius. Heinen and Hopman had also supplied a refrigeration plant to aid in preserving the freshness of the onboard cargo during the vessel’s long homebound trips from the vast fishing grounds off the northern coast of Russia.

Vyborg claims Barentsevo More is the first large-capacity KM-classed trawler to be built by a Russian shipyard in the last 30 years. In addition to its massive 2,500-cubic-metre freezer hold capacity, the vessel also boasts fish meal cargo hold and canning cargo hold capacities of 350 cubic metres and 100 cubic metres, respectively. Further, whereas the original Skipsteknisk design had a rated processing capacity of 120 tonnes of fish per day, the new vessel is capable of processing up to 160 tonnes per day, a figure which also includes 40 tonnes of ground fish for fillets, 60 tonnes for fishmeal and oils, and a canned product output which is equivalent to 5,000 cans.

The vessel also comes equipped with three cranes: a six-tonne crane on the aft deck, a 2.5-tonne crane on the foredeck, and a three-tonne crane mounted amidships. Another notable feature is the trawl equipment which also includes an automatic palletising system that helps significantly reduce the time it would take to unload catches and store these properly in the hold.

Barentsevo More and its three sisters – Beloe More (“White Sea”), Norvezhskoye More (“Norwegian Sea”), and Karskoye More (“Kara Sea”) which are under construction – are slated for Arkhangelsk Trawl Fleet, a company under the North West Fishing Consortium and owner of one of the oldest fishing fleets in northern Russia. The vessel will be operated in waters that are known for being abundant in cod, haddock, herring, blue whiting, mackerel, and shrimp. 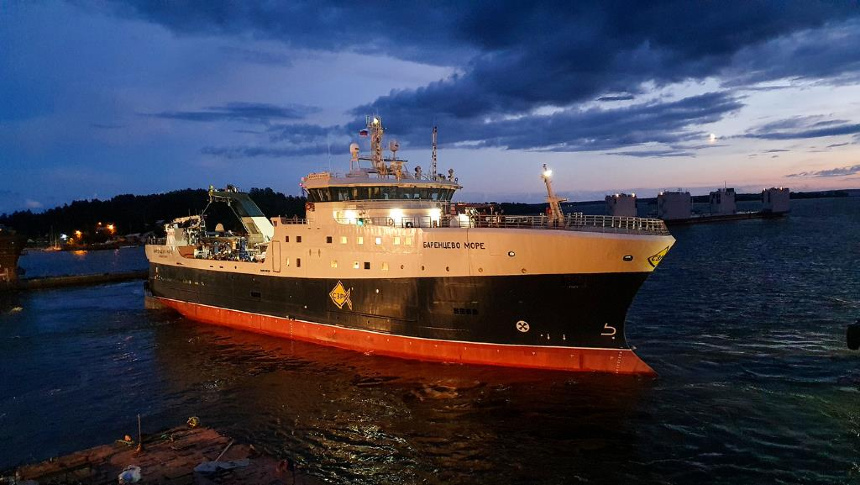