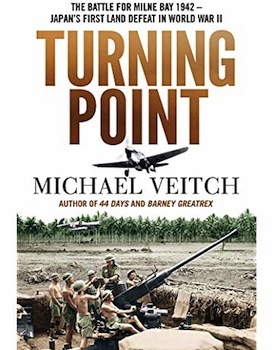 This excellent book has been a long time coming. Your reviewer, whose father fought in the battle, thought that given the lack of good books on the subject, he may have had to write one himself. With the publication of Turning Point, he has thankfully been relieved of that duty.

Having been told something of the battle by my father and having read most of the material produced to date, in the form of unit histories and the like, I had a good general idea of what happened in August 1942 and what the geographic and climatic conditions and the enemy were like. This carefully researched work has filled in a lot of the gaps and provided a very comprehensive overview of the battle and the preparation for it by both sides. The final dramatic and overwhelming Australian victory at No 3 Strip (Airfield) is brilliantly described. As is the unprecedented and highly effective co-operation between the Australian Army on the ground and the brave fighter pilots of the RAAF and their very efficient ground crews.

The very quick, innovative and efficient American airfield engineers are fairly praised. The only failing of the book is its tiny reference to the ships of the RAN and the Merchant Navy which, after all, got the troops and their equipment and supplies to Milne Bay in the first place. There is one notable inaccuracy in that the author describes HMAS Laurabada as a “ship”. She was in fact a converted yacht.

While strongly reinforcing almost everything my father told me, it has gone much further and also reminded me of what I had learnt subsequently in Australia, Papua and Japan. It also reminded me of how certain important matters of history can be neglected or obscured if the victors or the losers desire. In this case, General Douglas MacArthur and his staff, dishonestly, but probably understandably, were determined to ensure that Milne Bay was regarded, historically, as a sideline because Americans took such a small, albeit important, part in it.

My father was always very bitter about MacArthur’s treatment of his distinctly unflamboyant commanding officer, Major General Cyril Clowes, who was given no credit for his great and comparatively inexpensive victory and who was sidelined for the remainder of the war. Macarthur was abetted in that by Australia’s Army chief, General Thomas Blamey, who my father usually referred to as a drunken sycophant.

The author is very good on the atmospherics of the place: the mud, the heat, the slush, the disease and the gore. His descriptions are graphic and unrestrained. Importantly, he clearly shows how well the much-derided “Chocos”, the so-called chocolate soldiers of the Australian Militia, performed in the battle. They may have been less than adequately trained but they shot, fought and survived impressively well. They did so far better than the “crack” Japanese marines sent to exterminate them.

The author taught me much more than did my father about the appallingly arrogant brutality of the Japanese troops. They took no prisoners and the innocent indigenous local people were abused terribly. That, of course, was standard practice for the Imperial Japanese forces as they surged south in 1942.

Finally, in his epilogue, the author reminded me of the tragically dishonest representation of the war that is offered to the current generation of Japanese people at the infamous Yushukan War Memorial museum in Tokyo. That disgraceful re-writing of history far exceeds the misrepresentations of General Macarthur. It, of course, totally ignores Japan’s first and most important defeat on land at Milne Bay. How can modern Japanese be expected to learn from such gross distortions of their history?

An excellent book that clearly and fairly shows what really happened at Milne Bay in August 1942.