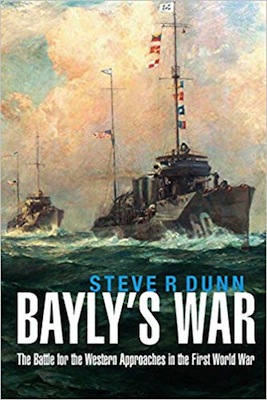 A well and very excitingly written description of the intense and vital activity of the Royal and, later, United States navies in the “Western Approaches” to England during World War I, this important book reminds us of an important but mostly forgotten aspect of naval history.

Centred around the irascible, eccentric but very effective Commander-in-Chief, Western Approaches, Vice Admiral Sir Lewis Bayly, the book well describes all the naval, climatic and political activity that affected that important command. Based in Queenstown on the south coast of Ireland, near Cork, Bayly not only had to deal with Germany’s very effective U-Boats but with the restive local Irish population, the Irish republican army and the Easter Rising.

Focused, innovative and relentless, Bayly, despite his irascibility, was generally much respected by his officers and sailors and, from mid-1917, by his American naval colleagues. He was, despite the comments of his many critics, an impressively effective naval warrior.

The author admits to not being impressed with Bayly initially. His research changed his mind and has resulted in an excellent biography of the man and history of his campaigns.