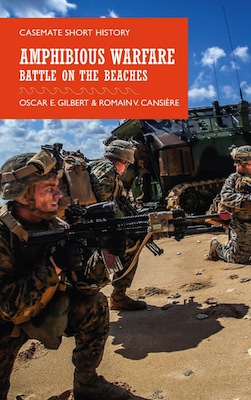 A brief but very informative book from the always excellent Casemate Short History series, this one describes the important history, present and probable future of amphibious warfare very well.

While, for obvious reasons, there is a considerable focus on World War II, the authors have taken a much broader view than that. They show the development of the doctrine, tactics, strategy, equipment and training that have led from ancient history to the modern importance of amphibious activity in warfare.

They particularly concentrate on the equipment used. The vessels range from small rowing boats through enormous Landing Ship Tanks (LST) and Landing Helicopter Docks (LHD) to hovercraft, helicopters and “tilt-rotors”. They well describe the tanks and amphibious craft such as DUKWs and LARCs that have played such a large part during and since World War II.

A brief but very useful overview of an important aspect of modern warfare.