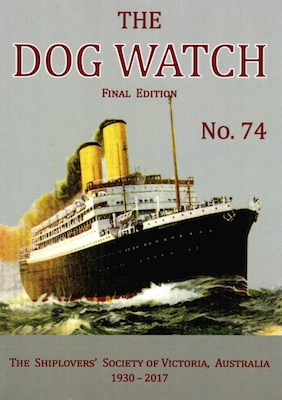 Edited by Maurice B. Hutchinson

Sadly, after 87 years, the Shiplovers’ Society of Victoria, the publisher of all 74 editions of The Dog Watch, has been disbanded. That is an unfortunate sign of the times in Australia where “sea blindness” has become endemic.

With so few merchant ships and literate merchant marine officers to be seen, the old romance and fascination with the sea and ships that inspired the establishment of the SSV, has very largely evaporated. The brief but valuable historical essays that mainly comprised The Dog Watch will no more be forthcoming so we should all make the most of this excellent final edition.

There are twenty-one essays in this edition, all of them interesting. A couple, however, refer to the real cause of the demise of the Australian shipping industry. That, of course, is the Maritime Union of Australia and its predecessor components such as the Seamans’ Union and the Waterside Workers’ Federation. Their grotesque demands and behaviour made investment in shipping in Australia completely futile. Theirs was a suicidal mission that hurt their members just as much as it did the wider populace.

So, grab it while you can and keep it as a record of both the good old days and the pitiful present.

Available from The Shiplovers’ Society of Victoria, Mount Eliza, Australia.