Emar Offshore Services, a Netherlands-based maritime service company, has just welcomed a new vessel to its fleet. The Damen-built E-TWO was ordered in November 2018 with a special request for the installation of an additional FiFi1 system, aft winch and hydraulic crane.

The harbour tug will be deployed for assisting in the berthing and unberthing of industrial vessels in major ports. The owner wanted to be beyond compliance with stability regulations that will be applicable for tugs from 2020 onwards and IMO emission areas.

“This expansion of the fleet enables us to ramp up operations in Africa and fully establish ourselves as a leading marine services operator in the region,” commented Johan van Beek, Managing Director of Emar Offshore Services.

The design is an upgraded version of a popular Damen model with more than 200 vessels in operation, further optimised with features that include full compliance with the new stability regulations, a modular marine NOx reduction system and the Damen Digital Platform to maximise performance and reliability. Its improved power and manoeuvrability allow the vessel improved performance even in restricted waterways.

Damen Digital is the gateway where all data from systems and equipment aboard the tug is channeled. This includes remote monitoring of fuel consumption and equipment performance.

The E-Two is prepared for the SCR/IMO Tier III system, by reducing emissions, which is particularly important in urban areas, typical areas of operation for a tug. The owner has the possibility of easily upgrading the tug from IMO Tier II to IMO Tier III emission limits, simply by installing additional equipment.

The built-in heavy-duty slipping clutch enables full fire-fighting driven by the main engines, while still remaining in full control of the propulsion power and thrust to manoeuvre the vessel. This saves the requirement of a separate diesel engine and associated maintenance, or, in cases of connection with the main engine without this slipping clutch, compromised manoevrability.

Total firefighting capacity is 2,400 m³/h (FiFi 1). Fire-fighting monitors are located on the aft side of the wheelhouse, to ensure optimal visibility during normal ship handling operations.

The towing winch, located aft, is a hydraulically driven, two-speed winch with spooling device and warping head, for a pull of 40 tonnes at up to 8.1 metres per minute, slack rope speed up to 34 metres per minute, and 150 tonnes brake power.

E-TWO is the fifth vessel Damen has supplied to Emar Offshore Services and is the fourth tug ordered directly by EMAR.

E-TWO is underway to China to collect her first tow, a new 75- by 25-metre flattop barge for EMAR named E-Barge 1. Purchased from Damen Concordia Shipbuilding, E-Barge 1 will be towed to the Middle East to be used on marine construction projects as part of the establishment of EMAR’s position in the region. A sixth Damen vessel is now under negotiation. 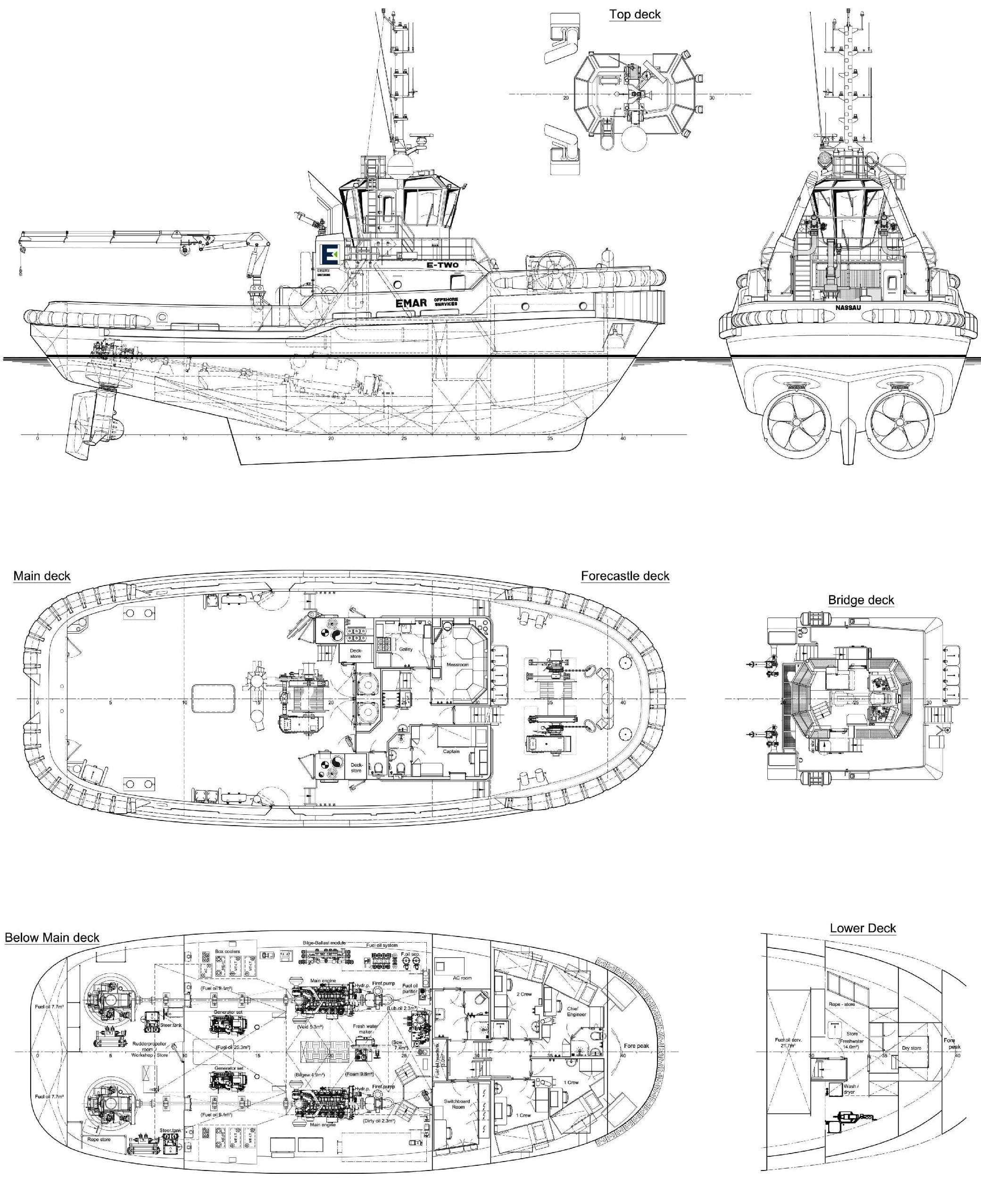