Russian operator Sakhalinlizingflot has taken delivery of a new Project PV22 ice-class ferry from United Shipbuilding Corporation’s (USC) Nevsky Shipyard. The ferry has been named Admiral Nevelskoy in honour of Gennady Ivanovich Nevelskoy, an explorer and navigator who is best known for his 1849-1855 expedition to what is now the Russian Far East.

The all-steel newbuild was designed by local naval architects Marine Engineering Bureau (MEB) to comply with the Russian Maritime Register of Shipping’s Arc4 ice class notation, enabling it to operate safely in the Sea of Okhotsk between Sakhalin and the Kuril Islands in the country’s Far East even during the winter months.

“The Arc4 notation means Admiral Nevelskoy is of a higher ice class than any of the other existing cargo/passenger vessels that operate in this region of Russia,” MEB told Baird Maritime. “The vessel can also load and unload heavy containers in large ports while a deck crane is available as well for handling other cargo in ports that are lacking in the necessary infrastructure. No other cargo/passenger vessels in this region possess this dual capability.” 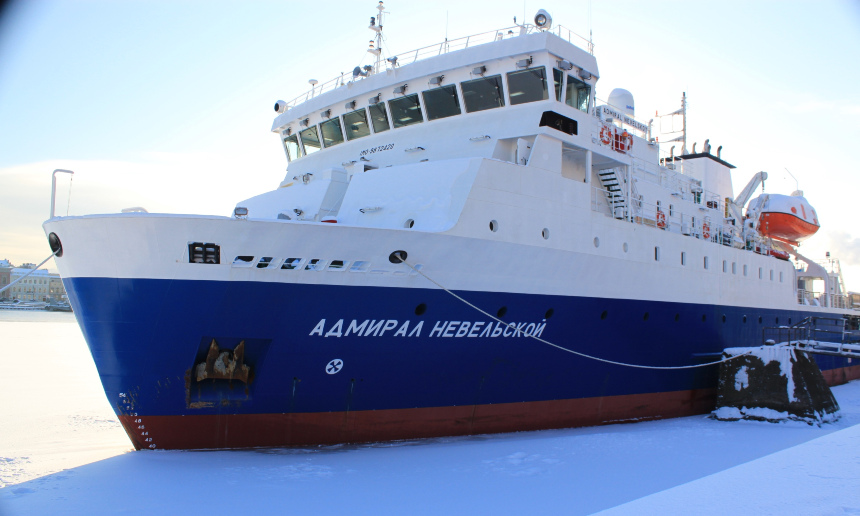 MEB added that, besides being the first new Russian-owned cargo/passenger ferry to be built domestically in nearly 30 years, Admiral Nevelskoy also boasts improved icebreaking capability, its design having been based on the Project MPSV07 search and rescue vessels optimised for use in Arctic waters. This enabled the design team to fulfil the owner’s need for greater passenger capacity, improved comfort, and a higher ice class without increasing the vessel’s overall dimensions.

“Because the dimensions needed to be kept within certain limits, the biggest challenges we faced were in ensuring all cabins boasted adequate comfort for the passengers and that enough space would be available for the large deck crane, which has a 30.5-tonne lifting capacity and 12-metre reach.” 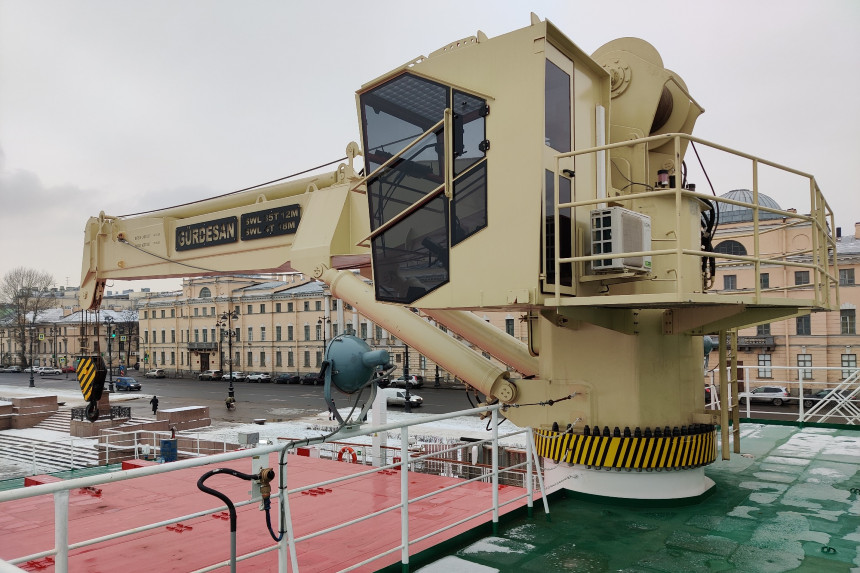 The limitations in the allowable dimensions were influenced by the fact that a number of the ports along the ferry’s regular route in the Kurils lack some of the equipment necessary for handling cargo containers. This, however, provided an opportunity for the design team to incorporate improved ice strengthening of the hull in line with the owner’s need for a vessel that can still transport people and goods to and from the mainland year-round.

MEB added that the only other cargo/passenger ferries in the region were built in 1991 and 1992, respectively, and are not well-suited for year-round operations due to their lower ice class and propulsive power. 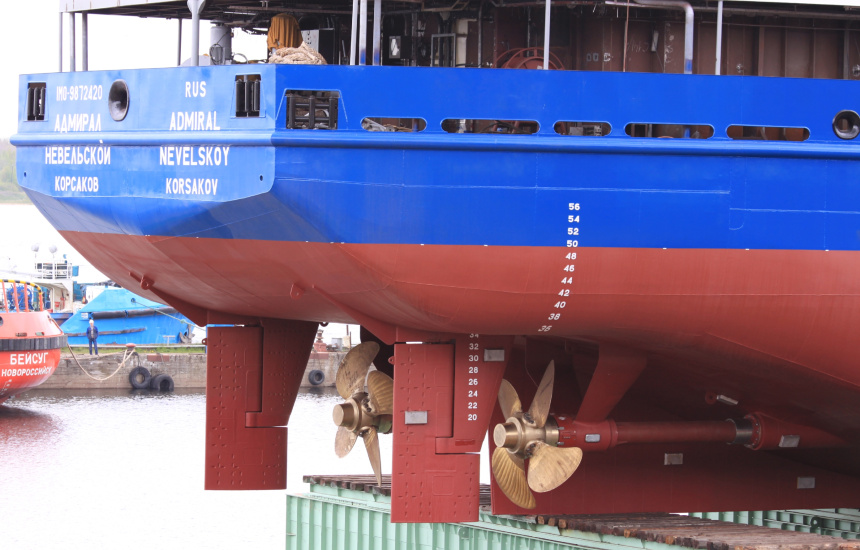 Admiral Nevelskoy has an LOA of 75 metres, a beam of 15.5 metres, a draught of five metres, and a displacement of 3,997 tonnes at full load. Two 1,800kW main engines that can run on either diesel or heavy fuel oil drive two 2,800-millimetre controllable-pitch propellers to deliver a maximum speed of 15 knots. A Schottel 200kW tunnel thruster at the bow aids in precision manoeuvring in tight confines. MEB has claimed the vessel’s manoeuvrability is an improvement compared to existing ferries on the Sakhalin-Kurils route.

There is space for up to 146 passengers including those with limited mobility, six cars, 24 containers, and assorted general cargo. The vessel’s 904-cubic-metre cargo hold also has dedicated space for dangerous goods as well as a refrigerated compartment for perishable items. 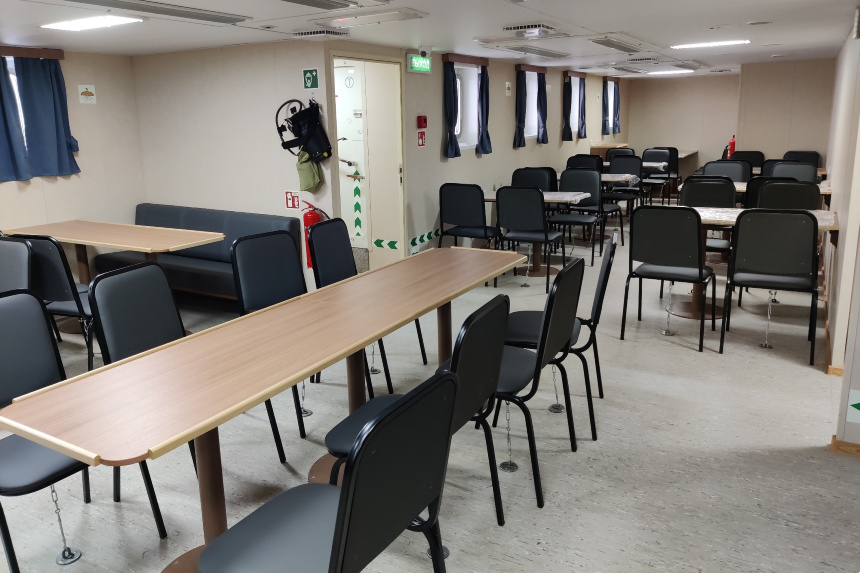 The passenger cabins come in various classes and each cabin has an en suite toilet and shower. There are 30 double and quadruple cabins, and this number also includes a cabin specifically for use by one or two disabled passengers plus a companion and cabins for mothers with small children. Other accommodation areas include a restaurant and a crew mess room.

“As a result of the optimal arrangement of the compartments,” MEB told Baird Maritime, “we were able to guarantee a GT-per-passenger ratio of 20.8, whereas most other vessels on the Sakhalin-Kurils route have figures ranging from 27.6 to 30.5. This indicates to us that we have achieved a higher level of comfort in all interior spaces, particularly the passenger and crew cabins.” 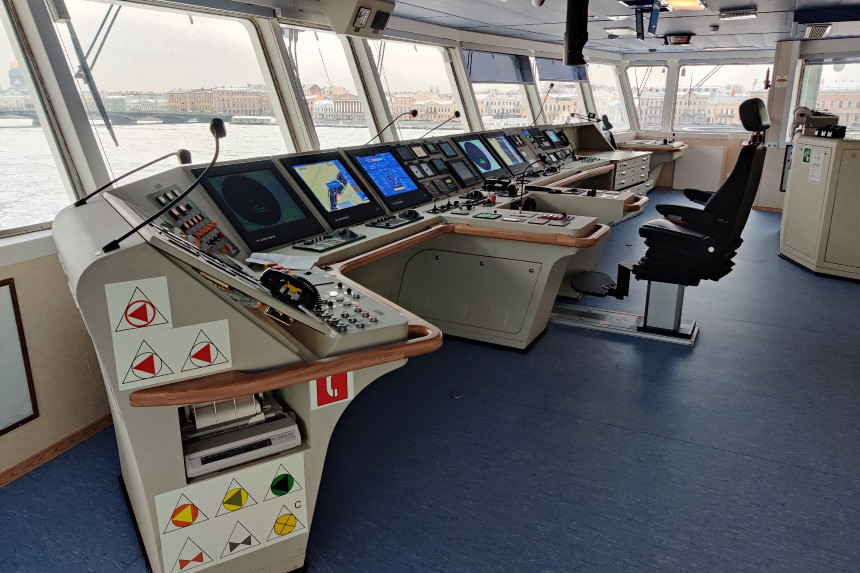 Remarkably, the ferry can be operated by just one crewmember in the wheelhouse, this attribute being made possible by the installation of what MEB has called an integrated automation system (IAS). This unified system encompasses both hardware and software in order to streamline maintenance and to minimise the overall need for spare parts.

In the event of an emergency, Admiral Nevelskoy is equipped with lifeboats, which are to be lowered into the water through davits that are also fitted with heating elements. This will help prevent the formation of ice on the davits’ critical components such as the winches, brakes, and pulleys. 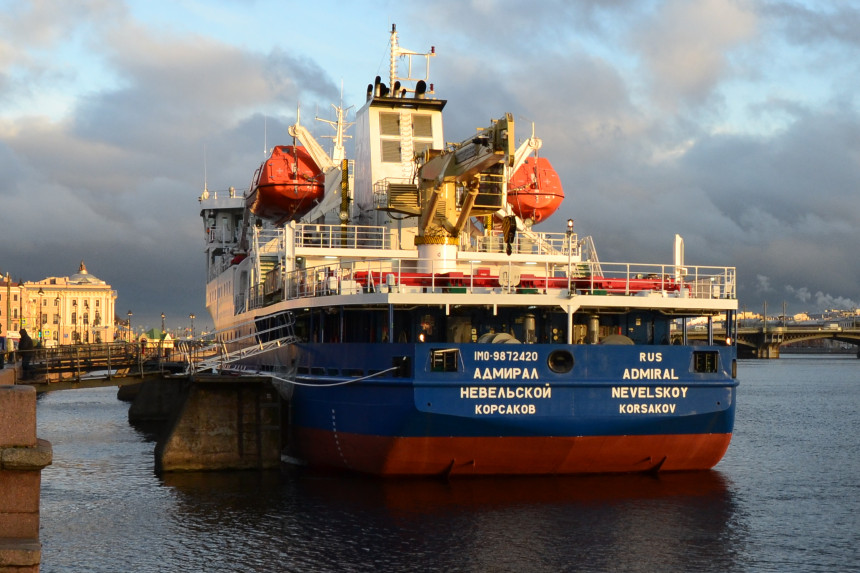 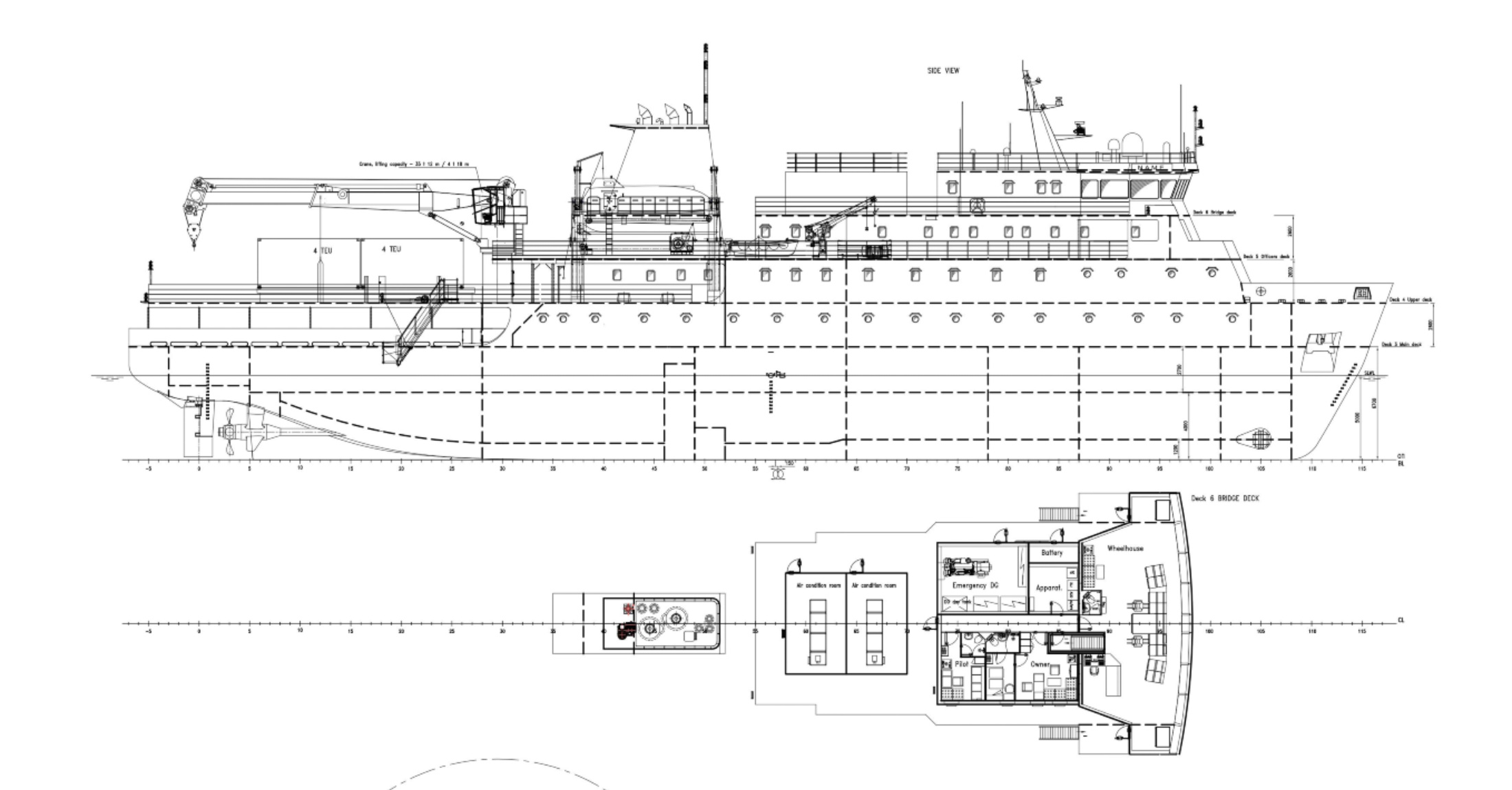 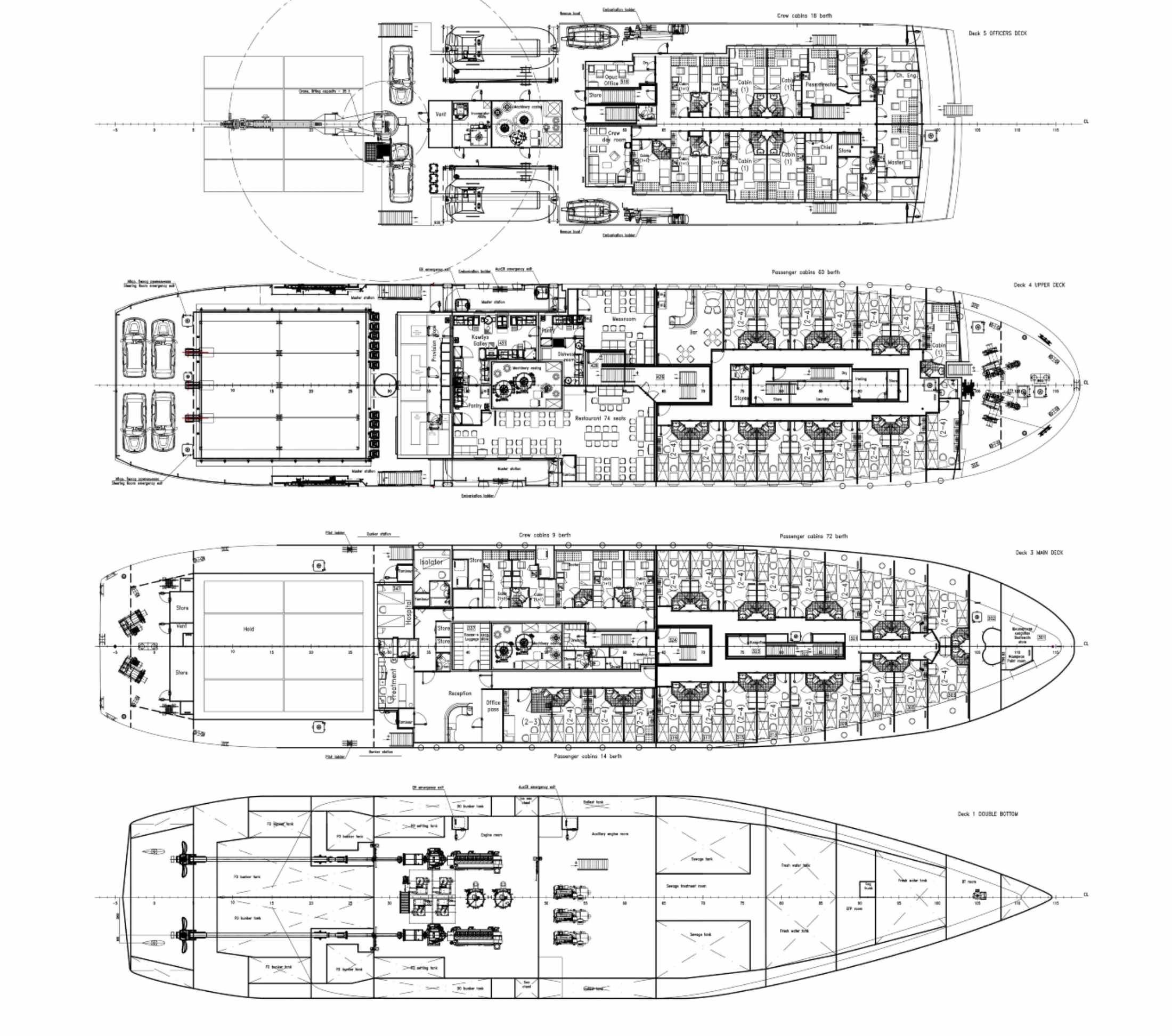