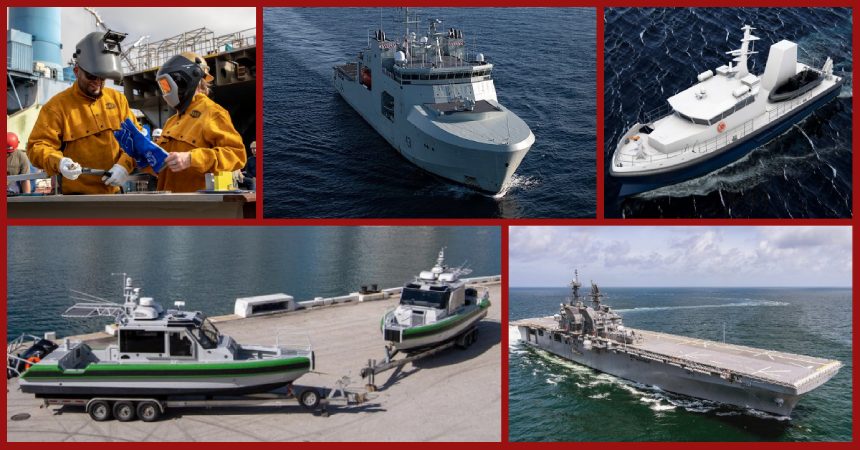 The Royal Canadian Navy commissioned its newest large patrol ship and a police department in Florida adds two recently completed vessels to its harbour response fleet. The US Navy reports construction is already underway on a future floating sea base and a contract has been awarded for a new amphibious ship. Lastly, a port operator in Hamburg has placed an order for two hybrid patrol craft to be built in Estonia.

Built by Irving Shipbuilding, HMCS Margaret Brooke was delivered to the navy in July 2021.

The AOPS has a length of 103 metres, a displacement of 6,615 tonnes, a helicopter deck with hangar, and diesel-electric propulsion that will deliver speeds of 17 knots in open water and three knots for icebreaking. Armament includes a 25-millimetre autocannon and two 12.7-millimetre machine guns.

Prior to its commissioning, the ship already conducted operational sailings by assisting in humanitarian aid missions on Canada’s Atlantic coast in the wake of Hurricane Fiona.

The vessels are each powered by twin Mercury V8 outboards and feature a spacious, climate-controlled pilothouse design.

The boats will be operated by the Miami-Dade Police in the waters of the Port of Miami. Two additional vessels from the same series will be built for the same operator.

General Dynamics NASSCO has authenticated and laid the keel of the future USS Robert E. Simanek, the fifth Lewis B. Puller-class expeditionary sea base (ESB) to be built for the US Navy.

The ship honours Private First Class Robert E. Simanek, a US Marine who was awarded America’s highest military decoration, the Medal of Honor, for his actions during the Korean War.

The 785-foot (239-metre) ESB will be used for missions including counter-piracy operations, mine countermeasures, special operations support, and humanitarian aid and disaster relief.

Huntington Ingalls Industries’ (HII) Ingalls Shipbuilding has been awarded a US$2.4 billion fixed-price-incentive contract for the detail design and construction of the US Navy’s fourth America-class amphibious assault ship (LHA).

The award includes options that, if exercised, would bring the cumulative value of the contract to US$3.2 billion. Ingalls Shipbuilding was awarded the original long-lead-time material contract for the future LHA 9 on April 30, 2020.

Construction on LHA 9 is scheduled to begin in December 2022.

Flotte Hamburg, a 100 per cent subsidiary of Germany’s Hamburg Port Authority, has awarded Estonian boatbuilder Baltic Workboats a contract for the construction of two patrol vessels powered by hybrid propulsion.

One patrol boat will measure 29 metres long and the other will be 24 metres long. Both will be designed for operation in the Port of Hamburg and within the waters of Germany’s exclusive economic zone in the North Sea.

The vessels will be capable of fully electric sailings for up to two hours at a speed of seven knots while the maximum speed will be just under 30 knots.

The total value of the contract is around €17 million (US$16.9 million) for two vessels. There is also an option for an additional third vessel of either the 24-metre or 29-metre variant.