Written by Baird Maritime on September 5, 2017. Posted in Ships (Naval). 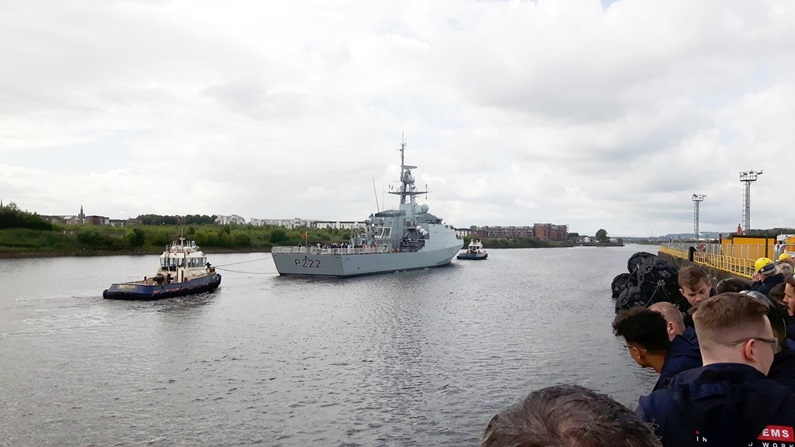 The first of the Royal Navy’s next-generation patrol ships sailed down the Clyde for the first time from Scotstoun, where she’s spent several months being fitted out, on her way to sea trials.

HMS Forth is the first-of-class of five state-of-the-art warships which will patrol around the UK, help to safeguard fishing stocks, patrol the Falkland Islands and deploy to the Mediterranean and Caribbean if necessary.

Designed for a crew of just under 60 (but needing only 38 crew at any one time to go to sea), the ships have a maximum capacity of 110. The Batch 2 River-class offshore patrol vessels represent a significant advancement on their predecessors, which were designed and built 15 years ago.

Forth, and her sisters Trent, Medway, Tamar and Spey, will be able to conduct all of the fishery protection and domestic security duties currently undertaken by the squadron but will now also provide far more capable platforms for deploying overseas.

They are four knots faster, carry a 30mm, not 20mm main gun, two miniguns, four machine-guns, and two Pacific 24 RIBs. Each ship is equipped with a flight deck (only Clyde of the first generation craft can host a helicopter) and there’s accommodation for up to 50 troops/Royal Marines to support operations ashore if needed.

Forth also borrows many of the first batch’s features – which were revolutionary in RN ships at the time: fixed fire-fighting systems across much of the ship and a computer-controlled machinery monitoring system. The bridge is far more Type 45 (spacious, computerised with interchangeable displays, communications kit) than the rather cramped Type 23 frigate.

HMS Medway has taken Forth’s place at Scotstoun for fitting out having been floated down river from Govan in mid-August.