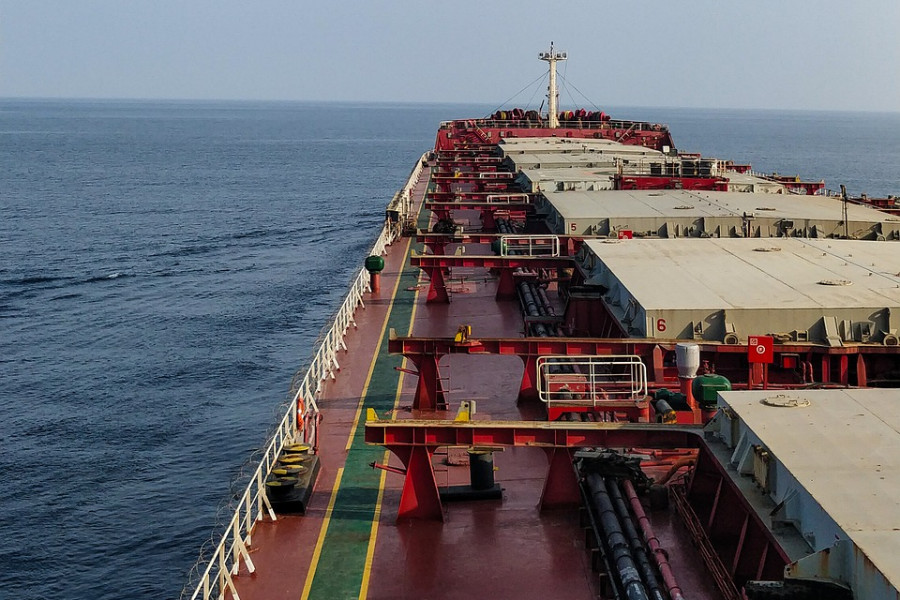 This overall drop in tonnes marks discrepencies between different dry bulk commodities. Of the three main commodity grous: iron ore, coal and agriculture, coal is the only one to have fallen; down 102.2 million tonnes from last year (-7.4 per cent). 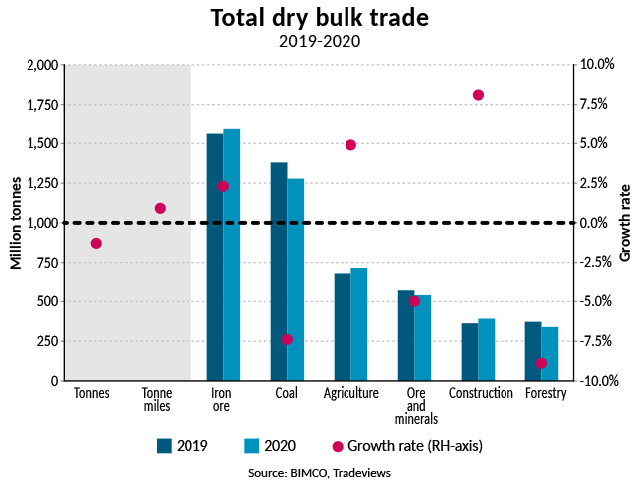 Iron ore and agricultural goods have, on the other hand, risen in 2020, up by 36.9 million tonnes (+2.3 per cent) and 33.3 million tonnes (+4.9 per cent) respectively, cementing iron ore’s position as the highest volume dry bulk good. In percentage terms, the biggest growth has come from construction, which grew by 8.1 per cent in 2020, but as absolute volumes are much lower, this translated into an extra 29.6 million tonnes.

The largest commodity in the construction category is cement, which saw a 13.4 per cent increase between 2019 and 2020. China accounted for half of this 21.5 million tonne increase, as the country saw its seaborne cement imports rise by 52.2 per cent (12.7 million tonnes).

“For dry bulk shipping, the year can be divided in two, with lower volumes and earnings in the first half followed by a recovery in the second, as China split from the rest of the world, boosting tonne and tonne-mile demand, and sending freight rates to profitable levels. June was the turning point as volumes reached their highest point of the year, and earnings jumped, especially for Capesize ships,” says Peter Sand, BIMCO’s Chief Shipping Analyst.

Chinese imports now account for 48.5 per cent of the market, leading to year-on-year growth in tonne-miles

In many ways following the narrative of the year, there is a split between China and the rest of the world. Splitting up the two in terms of dry bulk trade, China grew strongly last year, with volumes rising by 95.3 million tonnes (+5.2 per cent). Amongst other things, Chinese imports of iron ore and soya beans have risen by 7.1 per cent and 12 per cent, respectively.

The strong growth in Chinese imports has, however, not been enough to make up for the fall in imports by the rest of the world when measured in tonnes. Here, demand fell by 4.5 per cent, amounting to 167.7 million tonnes, overshadowing the growth in China.

Tonne-mile growth was a buffer for earnings

Across the board, dry bulk earnings averaged below breakeven levels in 2020, though no sectors experienced average earnings below 2016 levels. Capesizes and Supramaxes were the hardest hit, averaging daily spot market losses of US$2,271 and US$1,170 throughout 2020, while Panamax and Handysize ships were just a few hundred dollars below breakeven levels estimated by BIMCO.

Timing had a crucial role in determing owners’ profitablity, as rates in the second half of the year were much better than those in the first, as the recovery in China helped lift the dry bulk market. 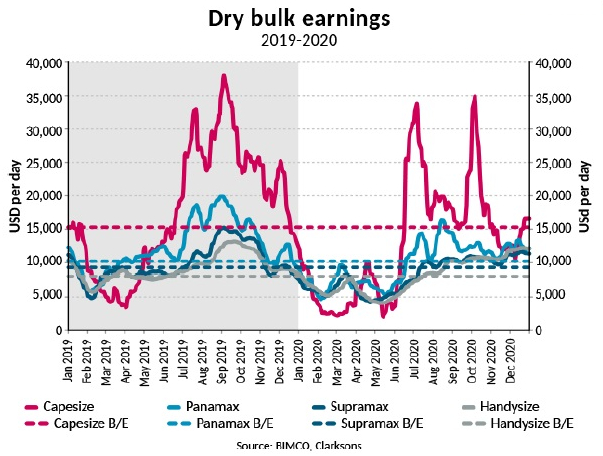 The slight growth in tonne-mile demand did little to offset the 3.8 per cent fleet growth in 2020, or 33.3 million DWT, thereby adding 2020 to the growing list of years which experienced a deterioration in the fundamental market balance.

Heading for a record breaking year

With 2021 now upon us, the obvious question is where is the world going now and how will it impact the dry bulk shipping industry? BIMCO expects China to continue to increase its dominance, though growth is likely to be more focused on private consumption rather than the infrastructure heavy stimulus measures of last year, somewhat dampening dry bulk imports.

As the rest of the world starts on its slow and uneven path to recovery, the dry bulk industry will continue to face challenges this year, demand will grow unevenly across the four dry bulk sectors, and fuel prices are rising, adding pressure to earnings. Countering this, fleet growth is expected to be at its lowest level since the turn of the century.

“We expect 2021 to be a record breaking year for the dry bulk industry both in terms of tonnes and tonne-miles, with demand growth likely outpacing that of supply. However, this will not solve the overcapacity issue that has long plagued the dry bulk market and is an obstacle that will not disappear just because a new year has started or a vaccine has been found,” says Peter Sand.