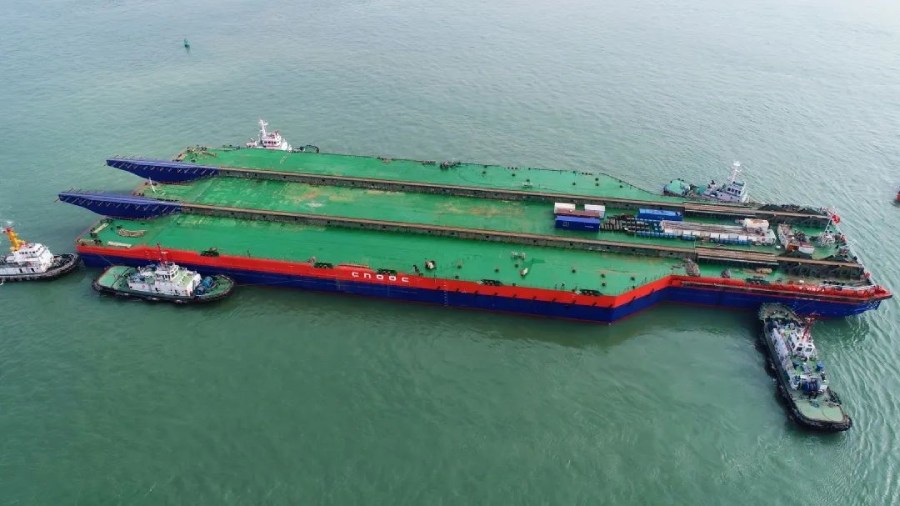 CSSC said Haiyang Shiyou 229 (“Offshore Oil 229”) is currently the largest offshore engineering barge in Asia and the third largest in the world. Measuring 235 metres long and 52.5 metres wide, the non-self-propelled vessel will be used mainly for the transport of jackets and other large offshore structures for installation in China’s oil and gas fields.

The vessel was originally built in 2008 by CSSC subsidiary Qingdao Beichuan Heavy Industry as a jacket launch barge for CNOOC. It initially boasted a cargo capacity of 30,000 tonnes, but the recently completed upgrade increased this capacity to 38,500 tonnes. This was done mainly to enable the barge to transport the Haiji Yi Hao deepwater jacket, which is 302 metres tall and weighs 30,000 tonnes, for installation at a depth of 284 metres at the Lufeng oil field in the South China Sea more than 200 kilometres off Hong Kong.

The key modification works on Haiyang Shiyou 229 lasted 227 days and were completed on schedule despite the prevailing Covid-19 pandemic. The modifications included installation of wider 415-tonne pontoons to expand the barge’s beam to 65 metres, upgrades of the loading equipment and associated monitoring and control systems, replacement of the main anchor windlass, and improvements to the overall longitudinal strength. An estimated 6,500 tonnes of steel was involved in many structural modifications that were implemented. Also, 4,512 pieces of deck longitudinals and bottom longitudinals were installed to enhance overall longitudinal strength.

Other modifications entailed installation of a new steel rocker arm and repairs and upgrades to the ballast and ventilation system pipelines. A valve remote control system was incorporated to improve the barge’s load adjustment capability to provide strong enough support for unloading and installation operations in offshore waters.