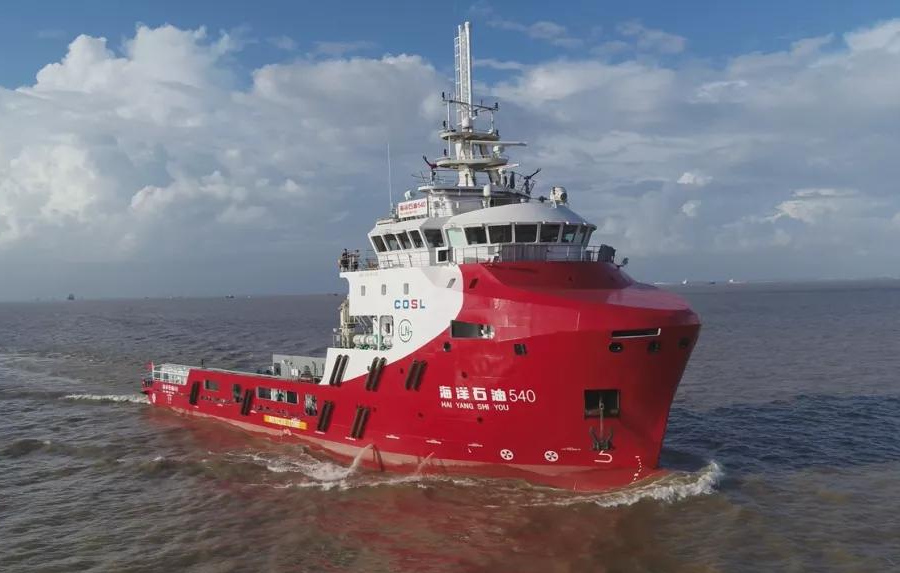 Built in compliance to China Classification Society (CCS) rules, Haiyang Shiyou 540 (“Offshore Oil 540”) is the first in a series of eight specialised vessels that are powered by LNG in line with COSL’s aim of reducing the carbon emissions of its fleet.

Haiyang Shiyou 540 has an LOA of 65 metres, a beam of 15.2 metres, a moulded depth of 6.6 metres, a summer load line draught of 5.5 metres, and a deadweight of 1,500 tonnes. LNG will be used as the main fuel for the vessel’s dual-fuel engines to reduce NOx emissions by as much as 90 per cent and thus ensure compliance with IMO Tier III standards. Diesel will serve as the backup fuel in the event that LNG is unavailable.

The engines have a total rated output of 2,982 kW to deliver speeds of up to 14 knots.

The vessel’s LNG fuel system meanwhile consists of a type C fuel storage tank with capacity for 170,000 litres. This tank and the associated equipment was supplied by Glory Holder Liquefied Gas Machinery.

In the offshore supply role, Haiyang Shiyou 540 is capable of transporting a wide variety of cargo used in offshore operations. These include fresh water, drilling water, salt water, fuel oil, base oil, mud, glycol, and drilling equipment. Although designed to be operated by a limited crew complement, the vessel is nonetheless capable of accommodating 100 people at any given time. This attribute makes the vessel ideal for responding to incidents that require evacuation of large numbers of survivors, such as a fire on an offshore platform.

Haiyang Shiyou 540 will operate as part of a fleet of 12 COSL-owned LNG-fueled guard and supply vessels, a number that also includes four larger 3,728kW vessels.