COLUMN: Is it all hype? [The Bow Wave]

Readers are surely aware of anti-ship missiles and the threat they pose to military and civilian ships alike. Western anti-ship missiles have typically travelled at subsonic speeds whilst the Soviet/Russian and Chinese militaries used supersonic weapons that travelled at two or three times the speed of sound (Mach 2 or Mach 3).

The word on the street, or dock, is that the Chinese and Russians aren’t content with their weapons meandering along at such slow speeds and have decided that to truly terrify foreign naval forces they need to have weapons that travel at hypersonic speeds, which are speeds greater than Mach 5 (6,126km/hr).

The Russian Zircon missile has been on the drawing boards since the mid 90s but received renewed funding in recent years and had a number of successful launches made in 2013 and 2016.

The Zircon is powered by a scramjet engine, meaning that it is self-powered and can take indirect routes to a target in the same way a cruise missile can. It is expected to operate at speeds up to Mach 7 and government trials are anticipated to be completed by 2020.

The Russians are designing a family of Zircon missiles that will be able to be launched at ships by air and land as well as from surface and sub-surface vessels.

The Chinese are believed to be making progress on a scramjet engine but given that it is an immensely complicated piece of design, and that the Chinese are still struggling to design efficient jet engines, they have chosen to approach hypersonic weapons from a different angle.

Rather than having an engine on board to provide thrust, the Chinese weapon will be mounted on the nose of a ballistic missile that will take it to the edge of space, at speeds of up to Mach 10, at which point it will detach and then glide to its target. Unlike a traditional ballistic missile which follows a predictable curve, the glider will be able to manoeuvre and evade air defences. The DF-ZF has been specially designed to target aircraft carriers and is causing quite a stir in naval circles.

It’s not all bad news for those in the West. A joint Australian-US program known as HiFIRE has been working on hypersonic scramjets for many years and has previously reached speeds in excess of Mach 7.5. The US has also been working on their own hypersonics program with the X-51 Waverider having flown at Mach 5 for 210 seconds back in 2013, a record duration for scramjet powered hypersonic flight.

Although the X-51 program has been discontinued the research is being used in ongoing weapons programs such as the Prompt Global Strike program to develop a precision strike capability that can hit a target, including ships, anywhere on the globe in less than one hour.

One of the big areas of concern with this new generation of high-speed weapons is that many people in the western navies are worried that the current generation of defensive systems may not be able to intercept a hypersonic weapon.

The weapons are travelling so fast that by the time they are detected they are through the first layer of the surface-to-air missile (SAM) defence sphere and are into the arena of the close-in-weapon system (CIWS), typically 20 or 30mm Gatling guns.

Even if the defensive radar was able to track the approaching missile from a range sufficient to launch a response missile, there are doubts that current SAMs would be able to intercept. For example, the Sea Ceptor in use with the Royal Navy can only hit targets travelling at speeds of up to Mach 3, not much help when a hypersonic missile could be travelling at twice or triple that speed.

When it comes to using a CIWS, unless the hypersonic missile receives a direct hit that causes it to significantly deviate from its course, it could still impact the target with sufficient kinetic energy to cause widespread damage.

So, how does one defend against missiles and projectiles travelling at many times the speed of sound? Perhaps by responding with something that travels even faster, say the speed of light.

Lasers have been the stuff of science fiction for decades with Star Trek and James Bond both facing off against the devices in the 1960s, and the US military spent untold billions in the 90s putting a laser into the nose of a 747 passenger jet which would be used to shoot down ballistic missiles from hundreds of miles away.

But that doesn’t mean that lasers have stood still, in fact thanks to ongoing advances in fibre optics, laser technology has been leaping ahead. Old lasers were massive units that relied on complex chemical reactions to generate the power behind them, hence the use of a 747 to carry one, but modern lasers are much smaller thanks to use of light emitting diodes, or LEDs.

The 747-based laser could carry enough chemicals to fire a dozen or so shots before it had to land and reload, a complex, dangerous and time-consuming process. Modern lasers using LEDs simply need to wait for the batteries or capacitors to recharge, usually a matter of seconds, resulting in a magazine that is as deep as your diesel supply.

Unlike a gun that has to fire the bullets where it thinks the missile will be when the bullet reaches its’ destination, a laser fires at the speed of light so it is hitting whatever it is pointed at, the travel time is virtually instantaneous rather than seconds long. This increases the probability of successfully intercepting a manoeuvring weapon, even if it is travelling at up to 2,000 metres per second. 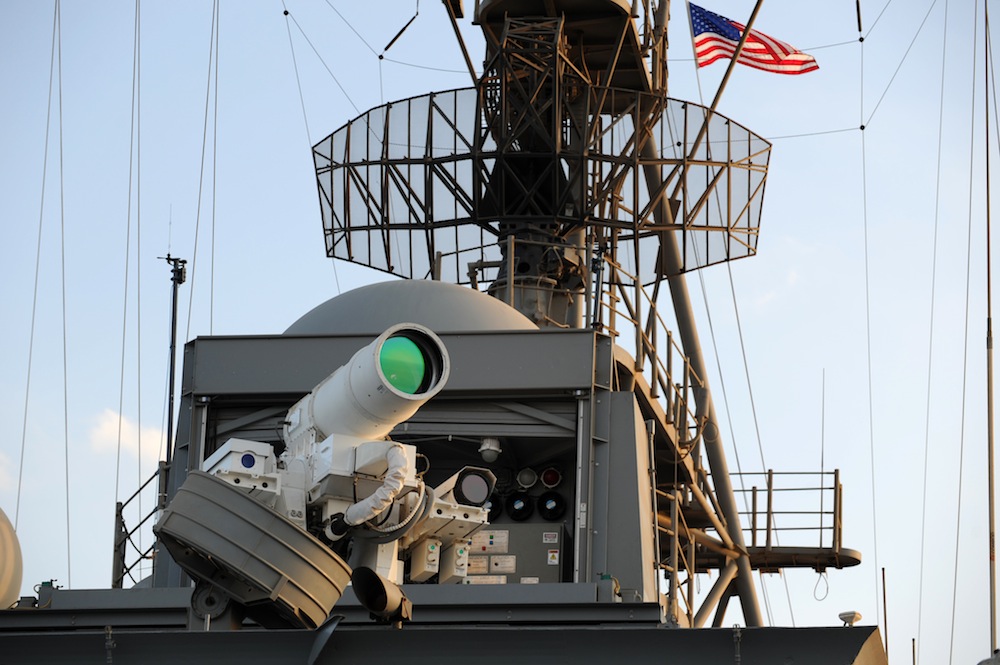 A laser has been installed on the USS Ponce, which has since sailed to the Middle East for an operational deployment. Reports from the US Navy indicate a cost-per-shot of less than $10 which compares favourably to the US$110,000 for a Hellfire missile fired from a Seahawk which is the current US Navy alternative for taking out a small boat swarm. The price is even more favourable when you consider that a typical SAM that is fired at anti-ship missiles can cost in excess of a million dollars.

Israel has been looking at road mobile laser systems for shooting down rockets fired from Gaza and Lebanon. These units consist of a diesel generator, a bank of batteries and a laser with a fire control system, a package that can easily be containerised.

Why is this of interest to the commercial world? Much like having armed guards aboard a vessel passing the Somali coast, during wartime commercial vessels could deploy containerised laser defence systems with a small crew of operators. These systems could be removed and transferred to another vessel once the ship is out of the danger zone, as with anti-piracy security, and removes the need for a permanent installation like those seen on the Atlantic Convoys of the Second World War.

Not having to store explosive cannon rounds or expensive SAM systems will keep the cost down and also means that there are less things that can blow up accidentally.

It remains to be seen how the lasers hold up in the marine environment and valuable lessons will be learned from the USS Ponce deployment such as how salt spray affects the laser beam quality and how intensive the maintenance is compared to traditional CIWS but they are definitely a defensive system that warrants close attention in the coming years, especially considering future threats.