Written by Andrew Baird on March 19, 2018. Posted in Offshore World. 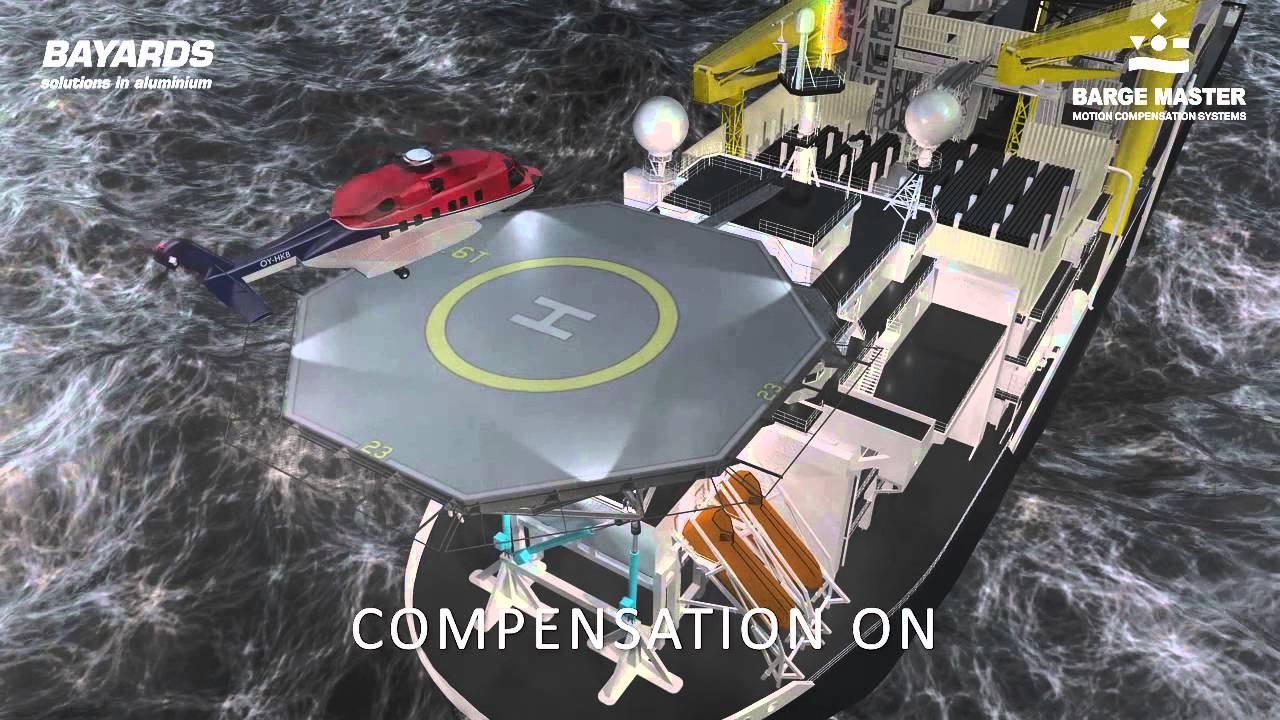 The other day I was watching some videos on YouTube and an interesting clip appeared in my “recommended viewing” queue.

I’m not entirely sure what videos I’d watched previously that made the boffins at Google think that this video would interest me but I’m glad their algorithms exist as this was a video from around 2014 and was an animation of a stabilised helipad for installation on large offshore support vessels.

The video had been uploaded by motion-compensation specialist Barge Master (available here https://youtu.be/PTclJxM_l4Y) and appears to be a collaboration between helideck manufacturer Bayards of the Netherlands and Barge Master. Having seen the impressive installations of stabilized walk-to-work (W2W) systems developed by Ampelmann in the pages of this magazine over recent years I was immediately interested in the stabilised helipad concept and started to wonder why we have not seen one actually being built.

A quick hunt online found a number of patents that have been lodged that detail stabilised helipads however none specify offshore use. One was for mounting on the back of a truck in terrain where no flat landing areas were available and another was for on top of skyscrapers that sway in the wind.

Certifying such a helipad for offshore use would probably be the greatest challenge as not only will the platform have to meet stringent ship design standards, but also the increasingly challenging standards of the generally conservative aviation safety agencies.

Given the horrific time that the North Sea helicopter fleet has had in recent years with multiple helicopter crashes it seems unlikely that any new development will be allowed without an onerous and exhaustive testing phase that very few companies could afford to complete given the limited market size.

It would seem that the idea hasn’t been picked up because of timing. The oil price crash slashed the use of helicopters offshore with the W2W-equipped vessels quickly taking up the slack. Should oil prices rebound I think it will be hard for even the most free-spending of exploration departments to get permission to return to the red-tape laden use of helicopters. There are still active groups of oil workers in the UK and Norway who refuse to travel on EC225 model helicopters after the spate of crashes, and this is unlikely to change anytime soon.

Whilst the W2W system undoubtedly takes longer per voyage, the fact is you can transport 100+ crew at a time, in worse weather conditions than a helicopter. Direct costs of operating a number of helicopters versus the single vessel end up being comparable however the W2W vessel doesn’t require that all who travel upon her complete an expensive, and intensive, helicopter evacuation and survival training course.