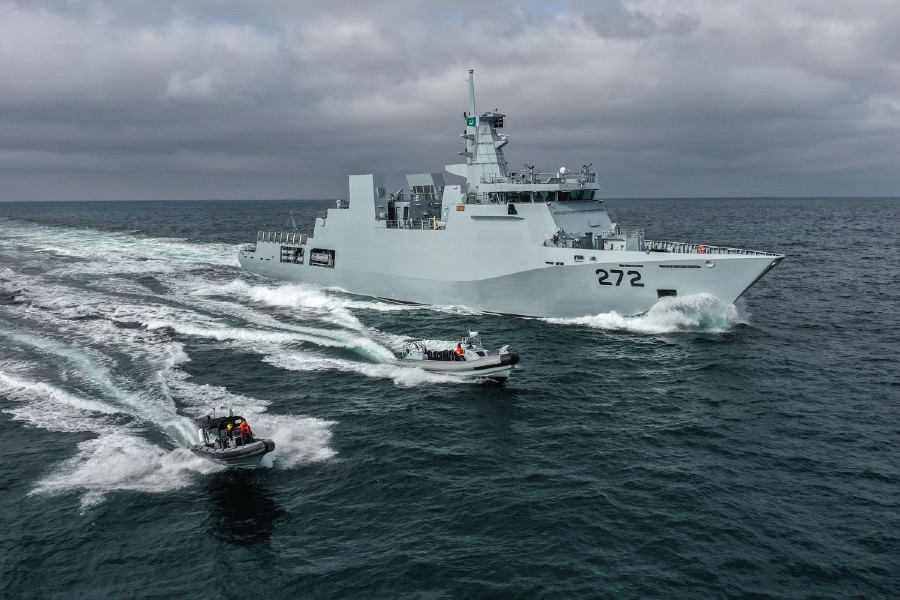 The flow of warships and maritime security craft seemingly never ceases. While almost all such vessels are government-owned, and governments are notoriously difficult to deal with, naval architects and shipbuilders the world over seem content to chase such work. Of course, there are exceptions to that statement. I know personally of several designers and builders to whom the old epithet “once bitten, twice shy” applies with a vengeance. They have better things to do with their time and money than to deal with governments.

By the same token, many such craft are designed and built in government owned, controlled or directed shipyards. In such institutions, where time and money are of little consequence, the flow will, of course, continue.

Nevertheless, countless private naval architecture firms and shipbuilders continue to deal satisfactorily, if not happily, with governments. Most of them churn out innovative, interesting and high quality vessels. Interestingly, most export orders seem to be in that category. Perhaps it is easier to deal with foreign governments than your own!

This week’s featured vessels come into both domestic and export categories. They are mostly from the smaller, cheaper, simpler end of the market but they are interesting nevertheless.

This month’s Maritime Security Week focuses on vessels between 15 and 84 metres in overall length and offering speeds in excess of 22 knots. They are constructed of either aluminium or FRP – no steel to be seen here. They are also a fairly multi-national selection in terms of both country of construction and country of ownership as well as source of equipment.

So, we have a large, long-range, French-built OPV for the Philippine Coast Guard (PCG). The well respected OCEA yard in Brittany has delivered the 84-metre Gabriela Silang to the PCG as its new flagship. It will no doubt be well and effectively used in that typhoon-prone, intensely archipelagic country. Well-equipped with easily launched RIBs and a helicopter deck, its speed of 22 knots and range of 8,000 nautical miles at 12 knots should solve a lot of security and safety problems.

Elsewhere we have Turkish conceived and built aluminium fast patrol boats 15 metres LOA. They are powered by Volvo Penta ISP “pod” drives. Their builder, Izmir Shipyard, is aiming at a wider market where their 40-knot top speed should be more than adequate. They should sell very well.

The maritime security sector remains both active and fascinating. Large or small, there are always plenty of new ideas and both incremental and dramatic improvements to be seen. I trust our readers will find this month’s Maritime Security Week as interesting as ever.

OPINION | Why does Australia need 12 submarines?


– “…it could be difficult to achieve significant improvements beyond the current availability requirement and thus escape the rule of threes.”

– by Marcus Hellyer, senior analyst for defence economics and capability at the Australian Strategic Policy Institute

– “South Africa may be well advised to embrace technology in responding to the insurgency, including using its relative advantages in maritime power…”

– by Francois Vreÿ and Mark Blaine

OPINION | Rebirth of the quadrilateral Malabar: promises and portents for India

– “India’s strategic interests are being threatened by China, and it has finally chosen a course of action that may best serve to defend those interests.”

– by Prakash Gopal, former Indian Navy officer and PhD candidate at the Australian National Centre for Ocean Resources and Security, University of Wollongong

– “India’s rising stature, its geopolitical interests and its role as a net security provider in the Indian Ocean region necessitate a strong navy with significant reach and power projection capabilities.”

Any news or views about the global maritime security sectors? Send it through to [email protected] ASAP (between now and November 20), so we can add it to this current edition of Maritime Security Week!