Marell Boats of Sweden has introduced a new high-speed interceptor demonstrator craft that has been developed as an improved variant of the company’s earlier 15-metre interceptor prototype introduced last year.

The most evident change from the earlier interceptor design is the installation of four outboard engines instead of two. Furthermore, whereas the first interceptor is powered by a pair of Volvo Penta D6 330kW outboards, Marell opted for four Mercury 450R 335kW engines to propel the newer craft to speeds of up to 70 knots. The engines have also proven capable of accelerating the boat from zero to 50 knots in less than 12 seconds, and to do so while retaining a level attitude that the crew does not lose sight of the horizon.

The interceptor retains the same overall layout as its predecessor – with a V-shaped bottom with hard chines and longitudinal strakes that reduce the risk of chine tripping when full turns are made at speeds above 50 knots – but is slightly larger to accommodate the two additional outboards.

The new craft has an LOA of 15.46 metres, a beam of 4.18 metres, a draught of one metre, and a displacement of 9,300 kilograms at full load. Like its predecessor, it is designed for high-speed interception and boarding, with a centre steering position for the helmsman to optimise control and allow for a full view of the surroundings during boarding manoeuvres and high speed turns. The crew are all safely and comfortably seated in Ullman shock-absorbing seats that level out the impact from the sea at the high speeds at which the boat would normally operate.

A raised foredeck creates a stable platform for the crew when approaching other vessels – for instance, during boarding operations at sea – whilst the lower aft deck can be used when boarding smaller vessels and launching watercraft and rescue divers. Although the vessel is obviously too small to accommodate a flight deck, its aft deck is nonetheless a very flexible and stable platform from where personnel can get aboard a helicopter and successfully carry out complex search and rescue (SAR) operations on the high seas. 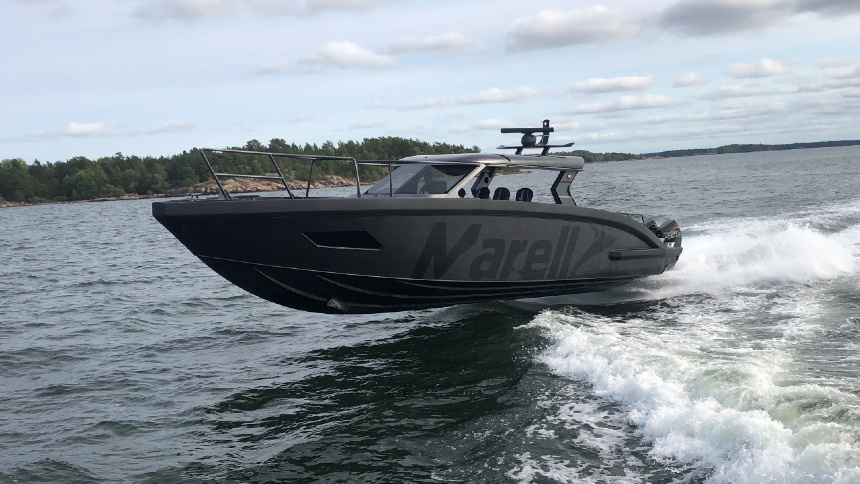 The vessel is designed to operate in very rough sea conditions, up to Sea State six. With the full body fore end, the vessel runs extremely dry with no green water on fore deck or spray on windscreens.

The hull plate of eight millimetres and the special pattern of longitudinal and transversal framing allows the vessel to handle impact from the sea in speeds up to 70 knots without any damages or buckling tendencies of the hull.

As with all Marell vessels, the new interceptor is fabricated in jigs. The jig frames forming the hull shape are precision cut with the same water jet cutting method as for the hull material. This precision work is thoroughly measured to be within the tight building tolerances.

Also, cut outs for the lifting strakes are made in the jig frames with the precision cutting machine, making the jig a base for a very accurate hull production of the bottom and sides of the craft with possibility to build a number of hulls in the same jig to identical dimensions and kept within very small tolerances.

The deck girder structure is designed to carry sandwich composite deck panels, which are glued to the girder structure. This forms a strong and watertight bonding and the deck panels themselves act as insulation against excess heat from the sun and reduces the deformation of the hull under high deck temperatures as the panels will absorb any elongation of the aluminium plating. By this method, the craft will be very suitable to work across all climate zones with great variations in air temperature and solar radiation.

The canopy is made of vacuum-moulded GRP to reduce weight and noise and isolate the crew area from the effects from both cold spells and the sun’s heat. The novelty of this design approach makes the craft suitable for both Arctic and tropical conditions within the standard hull specification. 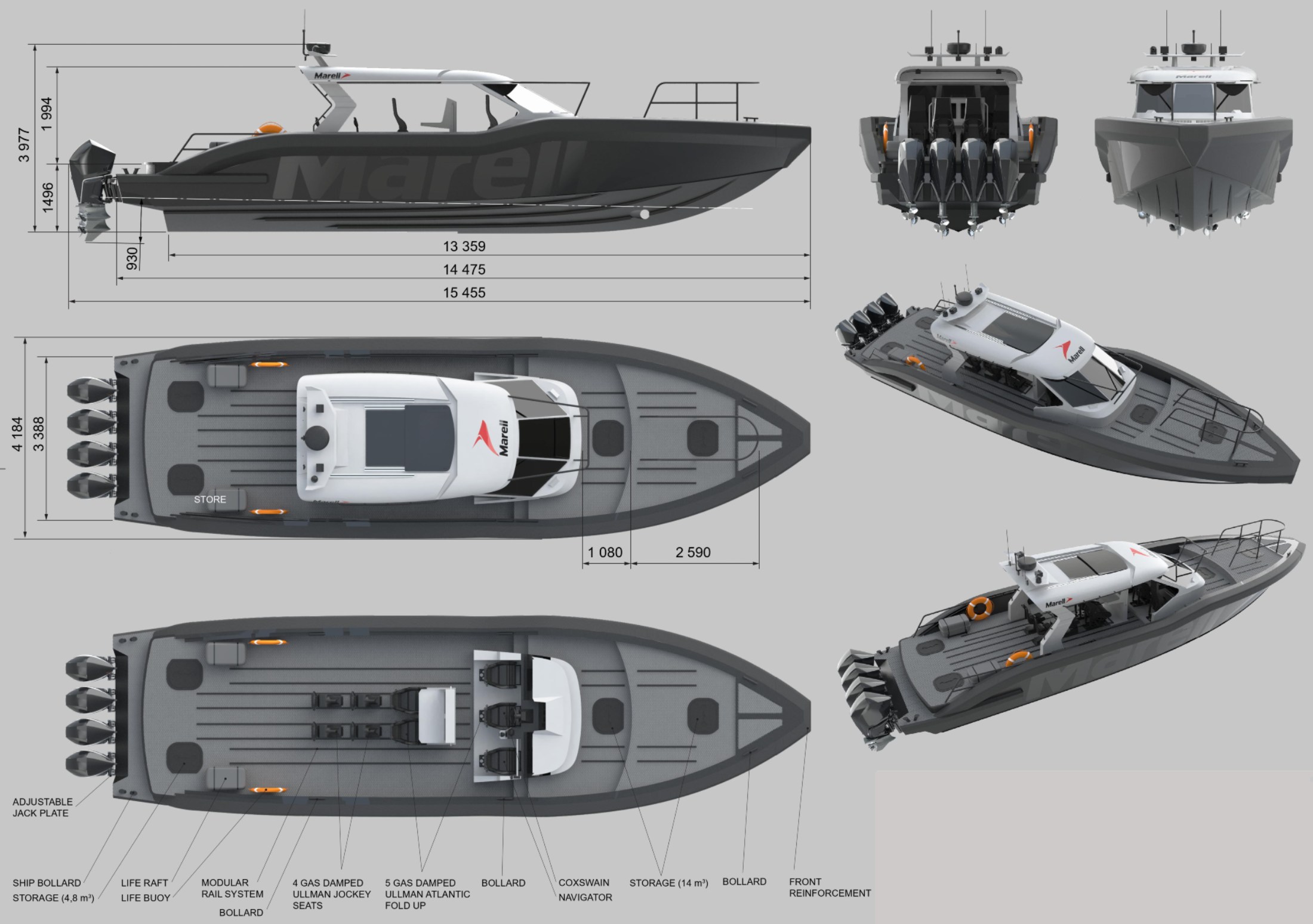