French shipbuilder OCEA has delivered a new aluminium-hulled offshore patrol vessel (OPV) to the Philippine Coast Guard. The newbuild has been christened BRP Gabriela Silang after a famed leader of numerous armed uprisings against Spanish colonisers in the northern Philippines in the mid-1700s, thus leading to her being dubbed by some contemporary historians as the “Joan of Arc of the Ilocos Region.”

The acquisition of Gabriela Silang was one of the key provisions of the Philippine Department of Transportation’s (DOT) 2014 Philippine Ports and Coast Guard Capability Development Project, which sought to expand the coast guard’s ability to enforce maritime laws, protect the marine environment, and ensure safety of life at sea. This same project also called for the acquisition of four smaller fast patrol boats (FPBs), which have since been built and delivered by OCEA following a competitive tender process.

Both OCEA and the coast guard had decided on an aluminium hull for Gabriela Silang as it is believed to ensure significantly lower operating costs compared to steel hulls on vessels of similar size. Further, the OPV’s operating profile is expected to achieve CO2 emissions of as much as 20,400 tonnes over the course of 20 years, thanks to its diesel-electric propulsion arrangement. The vessel also boasts excellent seakeeping courtesy of an array of passive and active stabilisation systems.

Measuring 84 by 16 metres, Gabriela Silang is also the largest vessel ever to be commissioned into service with the Philippine Coast Guard.

The vessel’s propulsion, which consists of two MTU 16V4000 M73 diesel engines and a pair of Leroy-Somer electric motors, enables it to achieve speeds of up to 22 knots and a range of 8,000 nautical miles at a cruising speed of 12 knots. The vessel is also designed to operate for up to 45 days out at sea before requiring refueling and resupply.

To help ensure that these missions are properly executed, the vessel is equipped with a surveillance and combat management system supplied by French defence contractor Nexeya. The system integrates the data provided by the radar, sonar, AIS, and other onboard sensors to form a virtual tactical image, thus enhancing the crew’s situational awareness while they conduct operations. 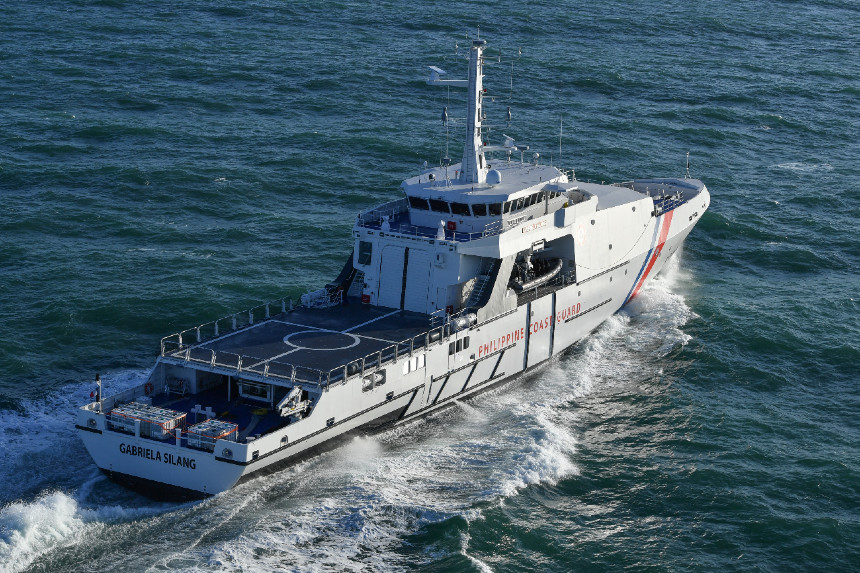 Gabriela Silang is normally crewed by 44 officers and enlisted sailors, though there are also onboard berths that could accommodate up to 61 additional personnel. This makes the 84-metre OPV an ideal platform for emergency response, being able to accommodate a greater number of survivors compared to the coast guard’s other vessels.

Other onboard facilities include a medical bay, two holding areas, and a divers’ room.

The OPV is equipped for launching and recovering two 9.5-metre rigid-hull inflatable boats (RHIBs) for SAR, interceptions, and boardings. There is also an aft flight deck for accommodating one five-tonne utility helicopter that further expands the vessel’s SAR, detection, and interception capabilities.

It did not take long before Gabriela Silang was given an opportunity to prove its capabilities. In less than a year after its formal hand-over in December 2019, the OPV has carried out numerous missions in support of Philippine interests both locally and overseas.

In January 2020, as the vessel left OCEA’s Les Sables-d’Olonne facilities and sailed for home waters for the first time, it was ordered to temporarily divert to the Middle East to aid in the repatriation of Filipino citizens who had become displaced in the region due to rising US-Iran tensions. The succeeding months then saw it being used to ferry medical personnel as well as medicines, personal protective equipment, and other supplies as part of the Philippine government’s Covid-19 response.

More recently, the OPV has been sailing almost daily, transporting coast guard personnel and humanitarian relief to various coastal communities in the Philippines that had been devastated by Typhoons Goni and Vamco in late October and early November, respectively.