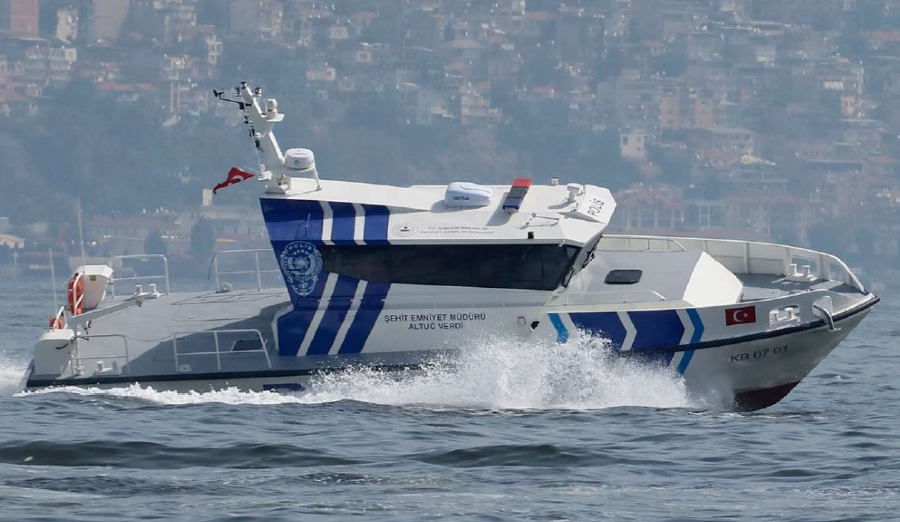 Izmir Shipyard near Istanbul recently handed over a new law enforcement vessel to the General Directorate of Security (Emniyet Genel Müdürlüğü; EGM), the agency of the Turkish government that also serves as the country’s main civilian police force.

Given the official designation KB 07 01, the Turkish Lloyd-classed all-aluminium vessel is designed to perform patrols, surveillance operations, and dive support in the waters just off the major metropolitan areas of Istanbul, Izmir, and Antalya. It has an LOA of 14.6 metres, a beam of 4.3 metres, a draught of only 76 centimetres, and space for three operators and five passengers as well as up to 5,000 kilograms of cargo in an HVAC-equipped and watertight cabin.

The cabin seating consists of suspension seats with three-point safety belts for the crew and benches for the additional personnel. The cabin also features an adjustable table, LED lighting, a non-reflective navigation console, a weathertight door, and six-millimetre tempered glass for the windows providing a 270-degree horizontal view from the operators’ station. Remarkably, there is also space inside for a small galley with stove and oven.

The EGM craft is powered by two Volvo Penta D8 410kW engines that deliver a speed of 40 knots. In addition to being fast, the newbuild also boasts enhanced manoeuvrability via joystick, thus ensuring quick and precise responses to operator input even in trimming the controls and in docking. The engine compartment has also been fitted with non-flammable insulation.

On the aft deck, a small crane capable of lifting up to 250 kilograms has been installed. The crane will be used to facilitate the transfer of cargo to and from the vessel.

“We were told that the boat would be needed to fill a capability gap within the EGM’s maritime law enforcement activities,” Izmir Shipyard told Baird Maritime. “Specifically, the EGM had stated that all its other marine assets are either too large or too small to operate in or near Istanbul, Izmir, and Antalya. The agency thus needed a platform that was small enough to operate in the narrow channels and inland waters of those three cities yet was still capable of carrying a sizable payload.”

The builder claims that EGM had also provided a rather detailed list of functions that the vessel was required to perform, as well as the attributes it needed to possess at the same time. The challenge therefore was in ensuring that the boat could achieve the speed and manoeuvrability required by the operator while still being capable of accommodating the wide array of equipment that it would need to accomplish its intended missions.

Izmir added that the processing the H321 marine grade aluminium in accordance with class society standards proved to be the most difficult part of the manufacturing process.

“Turkish Lloyd’s parameters were rather high that, compared to most of our other newbuilding projects, it took us five times longer on average to manufacture the different aluminium panels that would constitute the boat. This was partly because we were not allowed to use standard high-speed planing craft parameters for our notation. We instead needed to comply with parameters that applied to offshore commercial patrol craft even though the vessel was intended to be operated much closer to the coast.”

Through close cooperation with the EGM, Izmir Shipyard was able to get regular immediate operator feedback, particularly during the trials phase. This ultimately ensured that the finished vessel would possess the required attributes and capabilities.

KB 07 01 has already begun conducting regular patrols and surveillance missions within its area of operations. Thanks to its speed and passenger capacity, the craft has also found use as a fast VIP transport for the EGM and other local agencies.