A new oil spill response vessel has begun operating in the waters in and around the Port of Ningbo-Zhoushan, one of China’s busiest cargo ports.

The vessel has an LOA of 55.1 metres, a moulded beam of 11 metres, a depth of five metres, a draught of 3.2 metres, and a gross tonnage of 925. A main engine with an output of 2,648 kW delivers a speed of 14.2 knots and a range of 1,000 nautical miles. Around 95 per cent of the vessel’s construction utilised locally manufactured components to help reduce operating and maintenance costs. 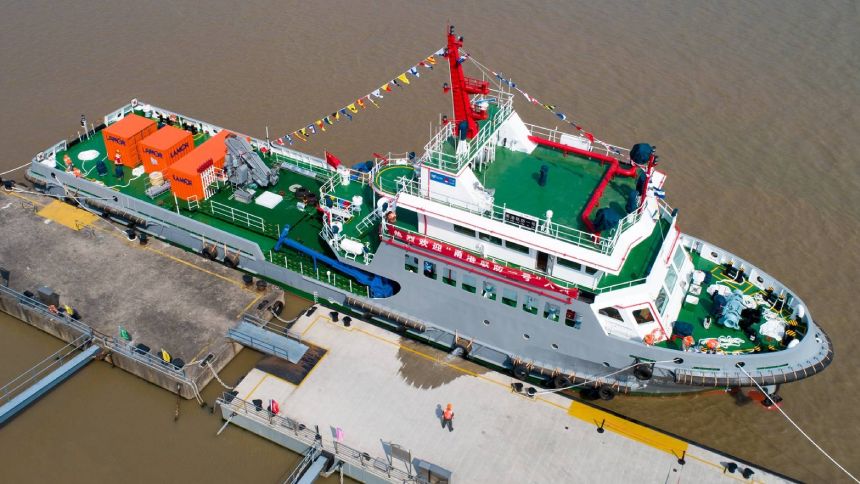 The oil spill containment equipment includes a side-mounted dynamic inclined surface skimmer and a 400-metre inflatable boom. The vessel is also equipped for debunkering, specially the transfer of oil from damaged ships as part of broader salvage efforts. Its large size guarantees significant carrying capacity, such as during transport of additional equipment for spill containment and recovery to augment the installed equipment on board. An onboard tank can accommodate up to 500 cubic metres of recovered oil while the recovery capacity is rated at 200 cubic metres per hour.

The vessel’s aft deck has a large folding crane and ample space for pollution response equipment supplied by Lamor.

The vessel also has secondary firefighting, search and rescue, command and control, and marine environmental monitoring functions, making it suitable for a range of maritime emergencies in both offshore and coastal waters. The firefighting equipment includes a water monitor mounted on the pilothouse.

Yonggang Lianfang No 1 is being operated by Ningbo Oil Port Barge Company out of the Port of Ningbo-Zhoushan. It is the first vessel to be assigned to the Ningbo Port Area Joint Defence Body, a civil defence and emergency response organisation formed by various operating units within the same port.

Click here for more news, features, and vessel reviews as part of this month’s focus on marine pollution control.