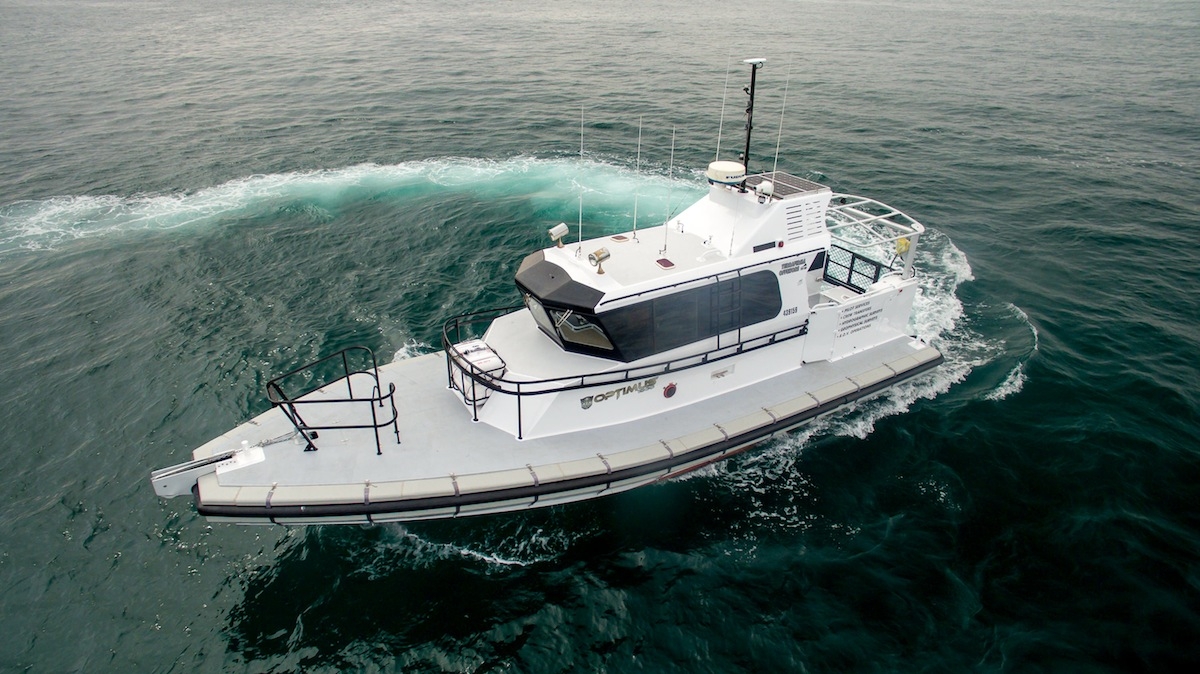 In 2012 a vessel named Beyond Vegas was thought to be the first pilot boat in the world to be fitted with Volvo Penta’s integrated propulsion system (IPS). Fast forward seven years and it has been re-named and reborn with enhanced performance and diverse capabilities through a major refit and modification program at Australia’s Dongara Marine.

The rigid inflatable boat (RIB) was originally built to transfer marine pilots in the Western Australian port of Dampier, a role that the newbuild Berkeley-class pilot boat AMG Winyama took over in mid-2016, meaning Beyond Vegas became available on the sale and charter market.

Aware of the boat’s background, Terrafirma Offshore Director Daemon Bass saw the potential in what he described as, “a lime green machine that had been treated mean”; a reference to its distinctive livery, and the wear and tear that was obvious after racking up some 12,000 hours working in the Pilbara region.

“Our family has been fishing commercially and operating offshore vessels on the WA coast for decades,” Bass explained. “We knew we needed a well-built, multipurpose vessel but couldn’t justify a large capital investment, so we looked at the secondhand market.

“Nothing fitted our needs off-the-shelf but we were confident that with the right attitude and expertise we could develop Beyond Vegas to have the versatility our plans required.” 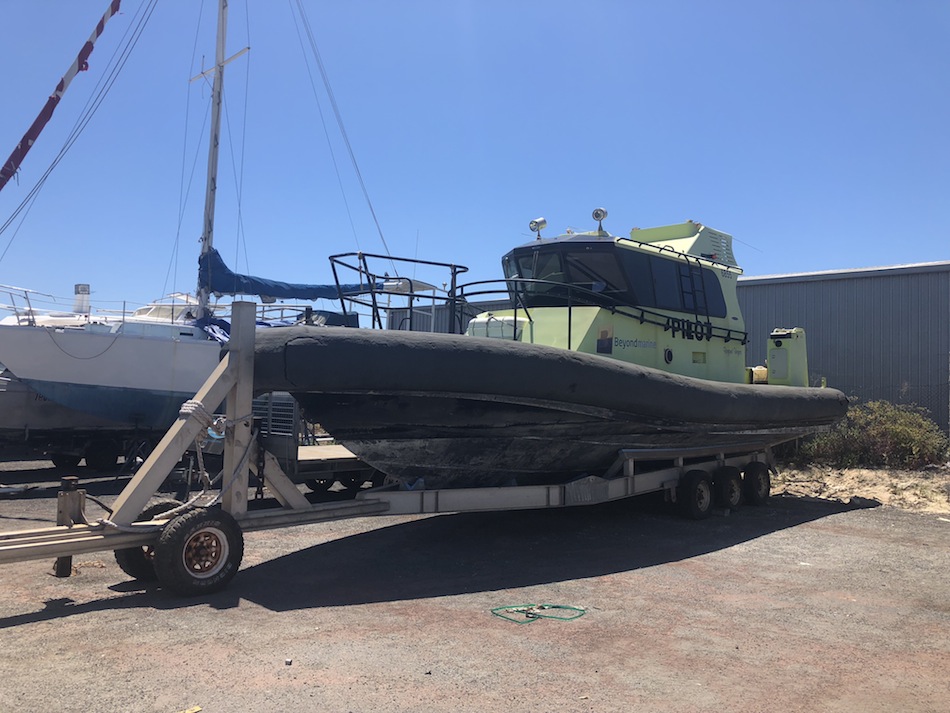 Before. Beyond Vegas had been somewhat neglected

Terrafirma Offshore bought the boat in late November 2018 and then trailered it to Dongara. Completed in May, the refit and modification saw Dongara Marine transform Beyond Vegas into Optimus 1000 within five months.

The boat has been entirely, inside and out. It can still carry out its original pilot boat function, but is now also equipped for crew/personnel transfer as well as survey and other functions.

“It’s the most versatile vessel of its size on the coast,” said Bass.

With carefully planned increases in its own fleet capacity, on-water activities are on the upswing at Terrafirma.

“To do the work you need the right assets in place,” said Bass. “We’ve had Bass Marine’s Kuri Pearl II up here for a while now and that’s generated some opportunities, and even though Optimus 1000 has been in water for only a few weeks there has already been lots of interest in her.

“The versatility has already been on show, with early tasks including personnel and light cargo transfer to an offshore support vessel and then tracking whale sharks as they moved along the coast. 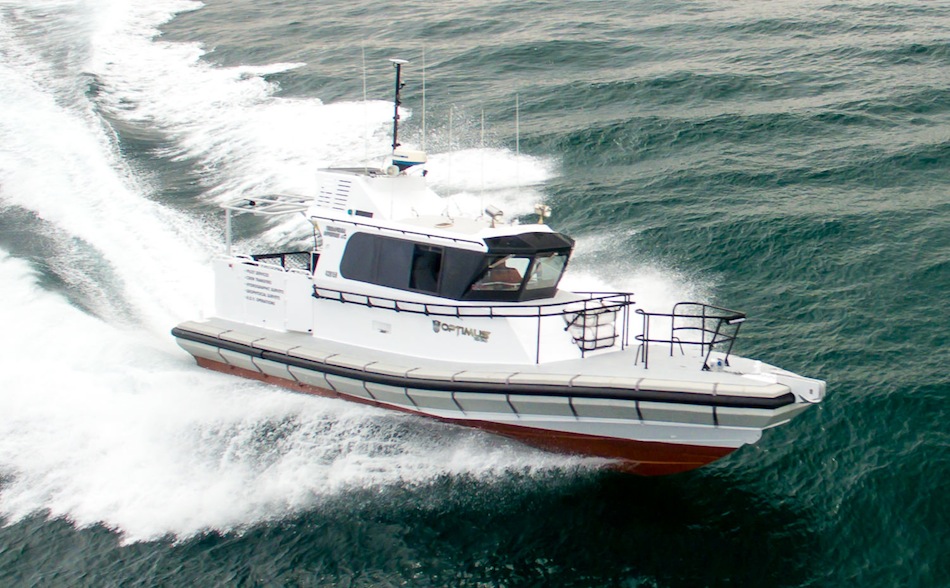 To facilitate crew transfer and even tourism work, Dongara Marine reconfigured the boat’s aft deck. Originally clear and open, it can now seat up to 12 passengers in an area that is partially enclosed through the addition of side bulwarks, clear screens, and an awning.

The cabin layout has also been arranged for greater flexibility. “For pilot transfer or similar work, the original layout of six suspension seats can be used but we now have the option to reconfigure this, by replacing two seats with tables we create survey stations,” Bass explained.

In addition to transferring pilots, cargo, personnel, supplies and equipment, Terrafirma Offshore also plans to use Optimus 1000 for survey work (oceanographic, hydrographic and geophysical), environmental investigations, and remotely operated vehicle (ROV) operations. For this, the aft passenger seating and awning can be removed to provide clear deck area to carry up to 1.5 tonnes of cargo, with overside handling of metocean and other gear accomplished through a new slewing davit that can be fitted on either side aft. Dongara Marine’s fabrication and engineering teams also rebuilt and modified the man overboard recovery platform to include a moonpool.

Another major modification was repowering the vessel with Volvo Penta D6-IPS500 propulsion units, replacing the original Volvo Penta D6-IPS450 units. Although total power increased by a relatively modest 58kW, it has had a major impact on speed. The steerable pods with twin counter-rotating forward facing propellers provide Optimus 1000 with a 4.5-knot advantage compared to the former configuration.

“The vessel now achieves a maximum 32 knots with a economical cruising speed of 26 knots at 120 litres per hour total fuel consumption,” Bass said.

The propulsion controls were also updated to include station-keeping/dynamic positioning capability.

“We’ve had the boat hold both heading and station to near centimetre accuracy for extended periods, even with a noticeable breeze,” Bass explained. “It doesn’t require any input from the master, which means I can also focus on other shipboard operations and crew safety rather than constantly adjusting throttle and rudder angle.”

Bass said the capability will benefit transfers, ROV and other overside operations, as well as tasks such as navaids cleaning and maintenance.

Dongara Marine’s Managing Director, Rohan Warr, said the considerable scope of work extended beyond modifying the boat to be a multi-role vessel. 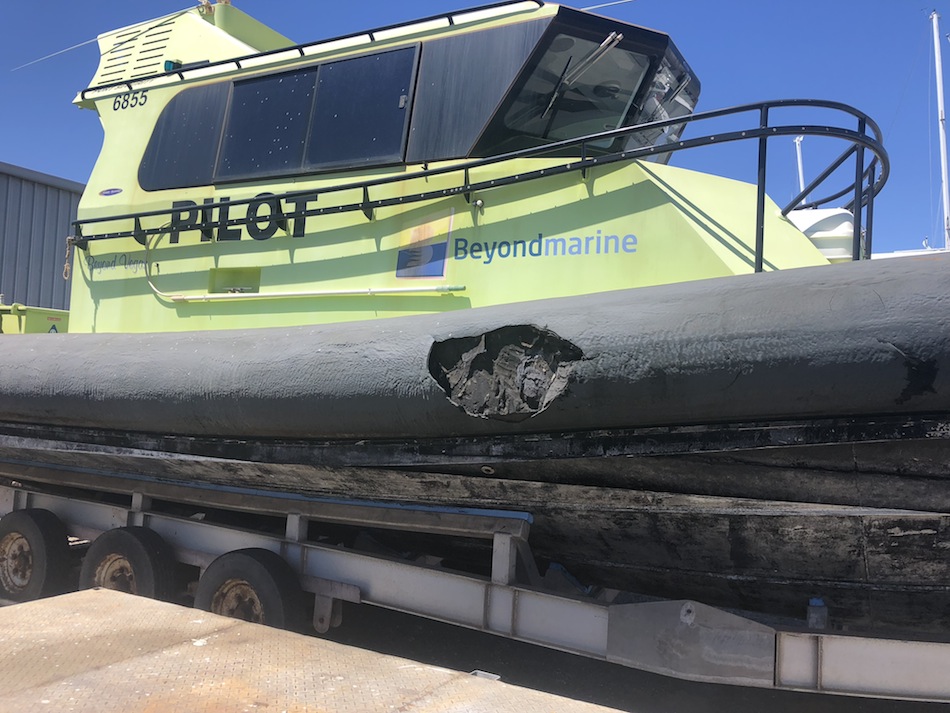 Damage to the fender

“In addition to the planned modifications to prepare the boat for its new roles, we naturally also checked all the systems to identify any faults that needed rectification. Although not an old vessel significant repair and maintenance work was also required,” he explained.

An obvious maintenance item was repainting, with Dongara Marine’s coating specialists blasting and painting the entire vessel, replacing the old lime green with a white Jotun Xtreme Gloss topcoat in the process.

Also contributing to the new look is a change in hull protection. “The original foam collar was severely degraded,” explained Rohan Warr.

“We replaced it with our custom fendering, which is also used on our Berkeley-class pilot boats. The system combines polyethylene foam with an HDPE tube rubbing surface and provides both excellent impact absorption and abrasion resistance.”

Other work completed prior to the RIB returning to the water included the addition of a Muir anchor winch and fairleads, and a host of electrical items including additional outlets, internal lighting, four new floodlights, a shore power connection and a battery charger. 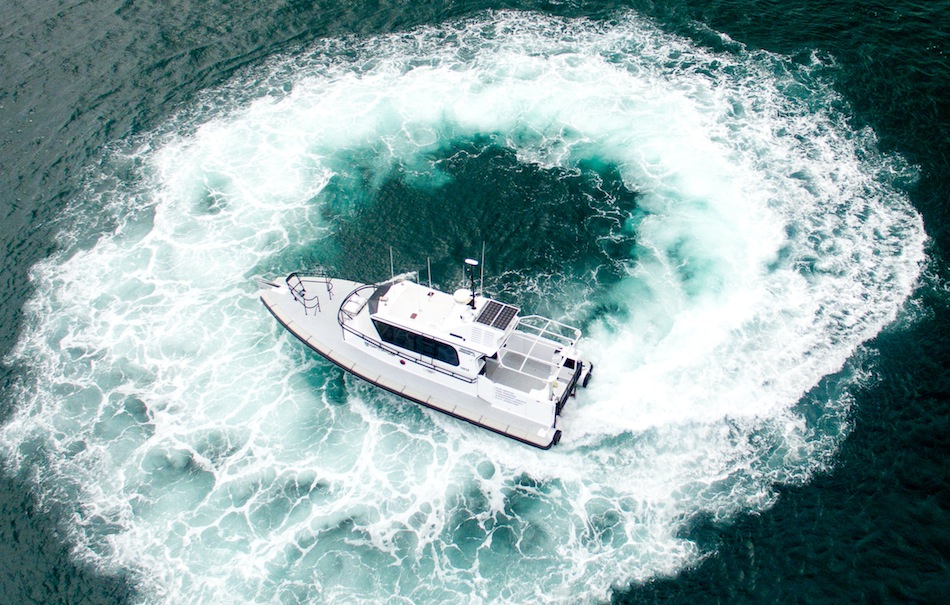