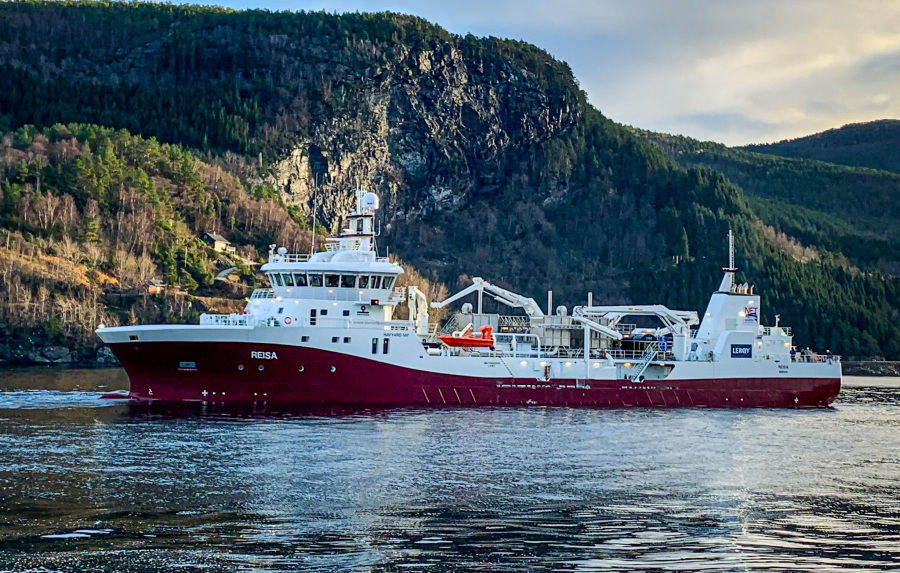 Designed by Havyard Design and Solutions according to DNV class rules, Reisa is the fourth vessel in a series to be delivered to the same owner beginning in 2014. The wellboat’s hull was completed in Turkey while final outfitting was carried out at Havyard Leirvik.

Reisa and its earlier sisters Havtrans, Namsos, and Steigen were built to fulfil NFT’s requirement for higher-capacity wellboats that will help better ensure fish health while in transit in addition to reducing harmful emissions during operations.

The vessel has an LOA of 84.8 metres, a moulded beam of 16.9 metres, and a gross tonnage of 3,964. Power is provided by a Caterpillar-MaK 9M25C main diesel engine that produces 2,999 kW and drives a Brunvoll gearbox and propeller arrangement to deliver a speed of 12 knots.

The vessel also has two Caterpillar C32 auxiliary engines, a Marelli Motori MJBM 400 LB4 B34 generator, and a Scania DI13 75M emergency generator. Rounding out the propulsion configuration are electrically-driven Brunvoll thrusters, with one each at the bow and the stern, and a rudder and steering system from Kongsberg Maritime. 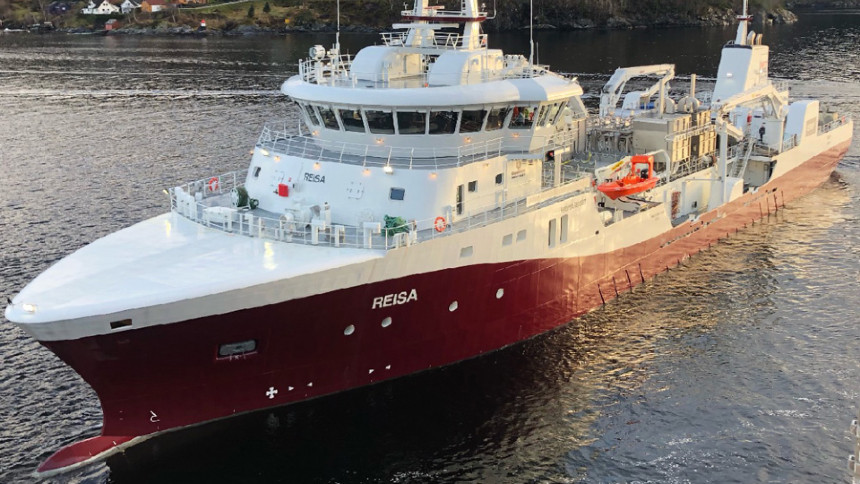 A host of features have also been added to satisfy NFT’s requirement for low-emission operations. These features include a selective catalytic reduction system and a special hull design that allows the vessel sail more smoothly through the water to help further reduce fuel consumption over the same distances.

The wellboat has a circular tank capacity of 3,250 cubic metres. Kjetil Myren, the designer with responsibility for the wellboat segment at Havyard Design and Solutions, said that circular tanks enable the vessel to transport larger quantities of fish while ensuring calmer conditions and higher survival rates, thereby enhancing fish welfare and better quality of catch.

Reisa was designed to feature extensive capacity for closed transport and infection protection with a Smir Hydrolicer dual delousing system that also includes freshwater treatment and a flushing system, thus eliminating the need for medicines that can potentially harm the live salmon. To further ensure the health of the fish while in transit, the vessel also relies on an Oxymat oxygen generator, a Redox ozone generator, and a Steinsvik UV reactor.

A Seaquest pump is used to haul the salmon on board and to offload it into NFT’s pens.

The deck equipment includes four MacGregor cranes, Adria Winch winches and capstans, an anchor and chain from Fossen Shipping, and a Teamtec incinerator.

Norwegian Electric Systems (NES) supplied the communications and navigation electronics, the bridge control system, and the automation and electrical power systems, including those used by the bow and stern thrusters. The bridge control system, which also features a highly intuitive integrated navigation system developed in-house by NES, was designed in such a way that the vessel’s different functions, whether navigating or loading and unloading live salmon, can be effectively executed and monitored by just one person from the bridge. Internal communications is via a Zenitel suite.

The fit-out of the interiors including the accommodation spaces for the 11-strong crew plus two additional personnel was supplied by Maritime Montering. Norwegian Greentech provided the ballast water treatment system. Lastly, lifeboats and firefighting equipment from Viking Life-Saving Equipment and a Palfinger self-propelled man overboard boat with davit have also been installed.