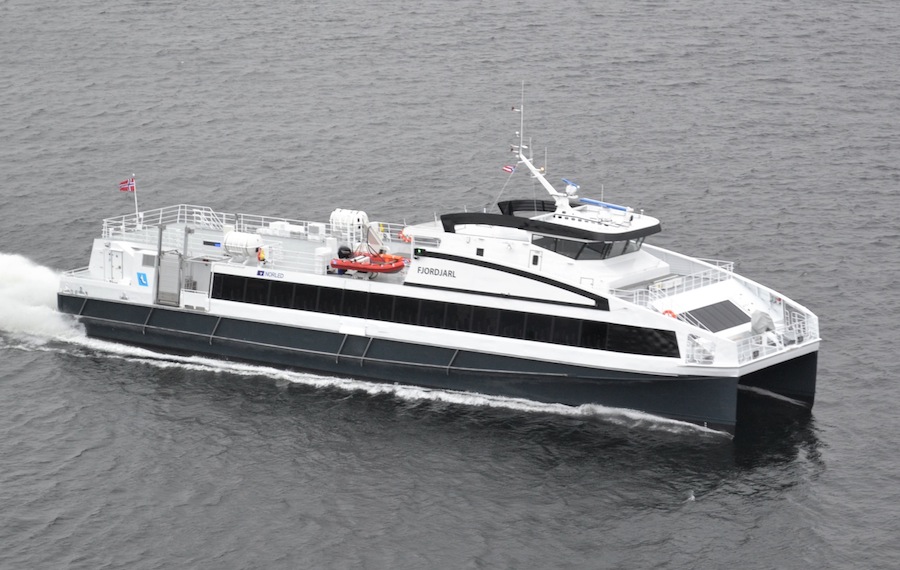 Stord, Norway-based shipbuilder Oma Baatbyggeri recently delivered a new high-speed catamaran ferry to local operator Norled. Named Fjordjarl (“Fjord Earl”), the vessel is the final one in a series of three aluminium-hulled ferries that are themselves larger and further improved variants of the Oma-built 33-metre catamarans currently operating on Norled’s other routes throughout the country.

Fjordjarl and its two sisters came about after Norled emerged as the winner of a 2018 tender issued by the council of Troms og Finnmark county calling for the provision of high-speed passenger vessels that will serve the county for a firm period of 10 years with an option to extend by up to five years. The NOK1.15 billion (US$124 million) concession had also stipulated that the vessels must be capable of operating along a route that will cover the municipalities of Harstad, Ibestad, Dyrøy, Senja, and Tromsø, or a total one-way distance of approximately 135 kilometres.

Rather than re-assign some of its existing vessels to serve this new route that will pass through the Arctic Circle and is expected to generate a significant volume of passenger traffic, Norled opted instead for newbuilds that were designed from the outset to be able to accommodate more people compared to the older fast ferries in its current fleet.

The new vessels also needed to be capable of operation with reduced noise levels and with fuel oil consumption kept as low as possible. With Oma and Norled having had prior cooperation on earlier newbuilding projects, development of the new ferries became easily aligned with the requirements of the tender, and orders for all three units were sequentially placed before the end of 2018.

Oma claims the design used for all three vessels emphasised seaworthiness and fuel efficiency, both deemed to be key factors as the NOK1.15 billion concession means they are expected to be utilised through 2030 and are thus not slated for replacement at any time until then. Further, the ferries will not just be transporting locals who regularly travel between the five Troms og Finnmark municipalities, they are also expected to bring a significant number of tourists to and from Tromsø, the world’s third largest city north of the Arctic Circle (after the Russian cities of Murmansk and Norilsk) and one of Norway’s major cultural centres.

Like its sisters, Fjordjarl has an LOA of 39 metres, a moulded beam of 10.6 metres, a draught of 1.6 metres, a displacement of 428 tonnes, and capacity for up to 296 passengers, which is slightly greater than the 280-passenger capacities of the next largest Oma-built fast ferries in the Norled fleet.

The main cabin has an HVAC system developed in-house by Oma, comfortable passenger seating provided by local supplier West Mekan Produksjon, and specialised accommodation for disabled individuals. In the event of an emergency evacuation, the vessel is also equipped with lifeboats provided by Viking Life-Saving Equipment.

To satisfy the requirement for reduced noise and low fuel oil consumption, the ferry is powered by four examples of MTU’s 8V2000 M72 IMO Tier II-compliant diesel engine rated at 720 kW and developed specifically for use on vessels with high load factors. The main engines are connected to a quartet of MJP DRB 500 DD waterjets, and recent operational sailings proved that this configuration could propel Fjordjarl to speeds in excess of 29 knots. However, should the main engines fail while the ferry is in transit, backup power is available in the form of two John Deere 46kW auxiliary engines.

Fjordjarl was handed over to its new owners last March 24 and has already begun sailing on the Harstad- Tromsø route as part of Expressboat, Norled’s passenger-only service. The ferry joins its identical sisters Fjorddronningen (“Fjord Queen”) and Fjordprinsen (“Fjord Prince”), which were delivered by Oma in October and December 2019, respectively, and which have been operating on the route since January 1.