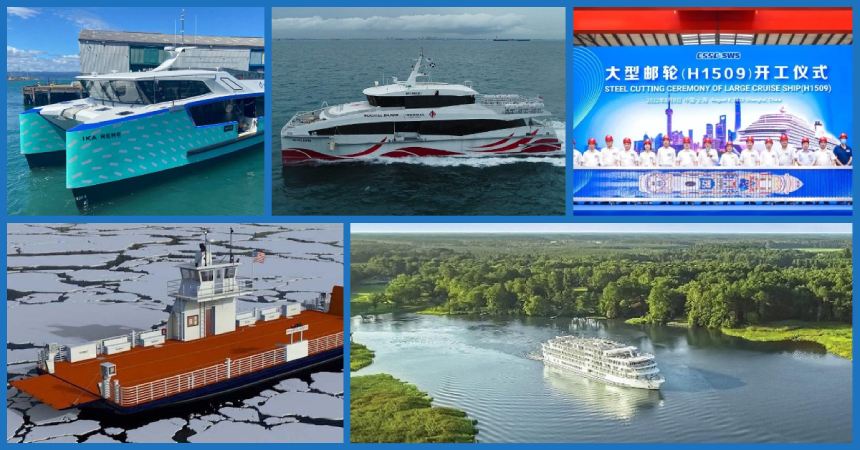 Newly completed vessels include a ferry for an Indonesian operator, a vehicle ferry for Michigan’s Upper Peninsula, and a Mississippi River cruise ship. Construction is underway on a new domestic cruise ship for China and a ferry for India’s Andaman and Nicobar region. Lastly, a New Zealand ferry company will expand its fleet with a newbuilding order.

Indomal Empire will transport a maximum of 255 passengers across the Malacca Strait between Indonesia and Malaysia. Two MAN D2862 LE483 main engines driving fixed-pitch propellers deliver a speed of 30 knots.

Facilities include three aft toilets on the main deck, a toilet on the upper deck, and luggage compartments.

Burger Boat Company of Wisconsin has completed construction of a new Ro-Pax ferry that will be operated on the St. Mary’s River in Michigan’s Upper Peninsula.

The SeaCraft-designed Neebish Islander III measures 92 feet (28 metres) long and has an ice-strengthened steel hull that will enable it to operate even under harsh winter conditions. The deck can transport up to 15 passenger-driven cars on each sailing.

The ferry will be operated by Michigan’s Eastern Upper Peninsula Transportation Authority (EUPTA).

Built by Chesapeake Shipbuilding of Salisbury, Maryland, American Symphony is the fifth river cruise ship in a series to enter service with ACL.

The 175-guest ship will depart Natchez, Mississippi, on its maiden cruise on August 30. It will be christened on the same day.

Once completed, the vessel will have a length of 341 metres, a beam of 37.2 metres, a maximum draught of 8.4 metres, and a speed of 22.7 knots. SCR and desulphurisation systems will also be fitted to ensure compliance to IMO Tier III regulations.

The vessel will comply with RINA and China Classification Society rules.

The Russian government has approved the allocation of additional funds for the construction of a new Ro-Pax ferry slated for operation in the country’s Far East.

The vessel will measure 119.7 metres long and will have capacity for 150 passengers and up to 78 vehicles upon completion. Design work was provided by local naval architecture firm Marine Engineering Bureau.

New ferry for India’s Andaman and Nicobar Islands floated out

India’s Cochin Shipyard has launched the second in a series of two Ro-Pax ferries ordered by the country’s Andaman and Nicobar Administration.

Named Atal, the 157-metre-long vessel will be capable of transporting 1,200 passengers and up to 1,000 tonnes of assorted freight. Amenities will include recreation rooms and a dining area.

Design work on the ferry was completed in compliance to Lloyd’s Register and Indian Register of Shipping class rules.

Wellington Electric Boat Building Company (WEBBCo) of New Zealand has been awarded a contract by local operator East by West Ferries for the construction of a second electric ferry that will serve the Greater Wellington area.

The ferry will be the second fully electric vessel in the East by West fleet after Ika Rere (pictured), which was delivered by WEBBCo earlier this year.

The newer ferry will also be capable of transporting 132 passengers. However, it will boast an enhanced battery storage capacity.