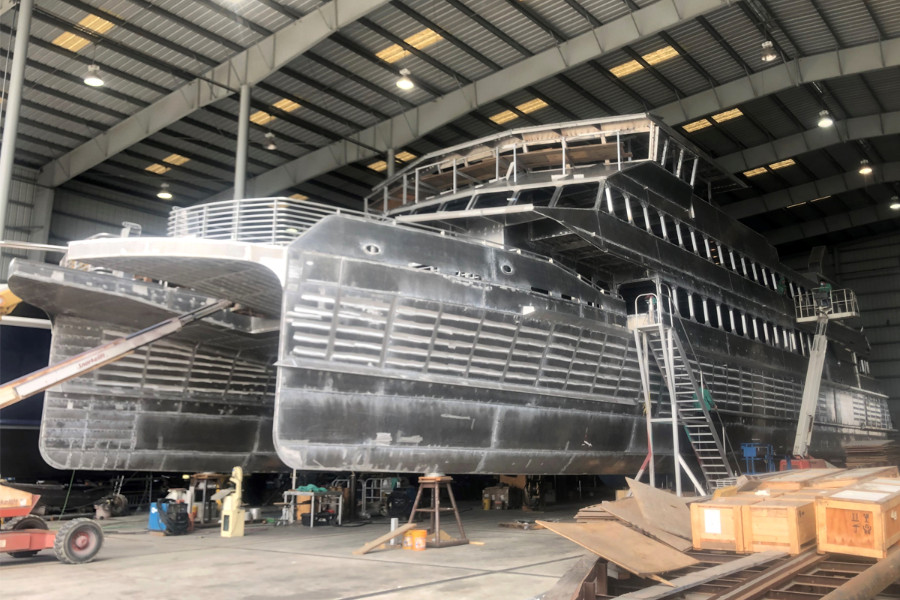 It’s lucky that our Passenger Vessel Week features roll around as frequently as they do. There is so much happening in the passenger vessel sector that we could fill one weekly.

Passenger vessels are certainly exciting, imaginative and innovative. And there is so much variety coming up, from a huge Russian inland waterways cruiser to a rather whimsical-looking little hydrogen-fueled catamaran from Japan. There is a smart, fastish Ro-Pax for Tahiti from Spain’s Armon yard. The only thing I don’t like about it is the bow door, even though it is one of the best I’ve ever seen. It redeems itself with excellent life boat and rescue boat launching facilities among other interesting features.

Norway’s Brødrene Aa presents yet another of its highly refined FRP/carbon catamaran ferries and Fincantieri, through its Romanian and Norwegian Vard yards, has a hybrid icebreaking cruise vessel for Ponant. The Spaniards, too, have been very busy and Oliver Design has come up with a brilliant conversion of a ferry into a cruise vessel for Scotland’s Western Isles.

Meanwhile, the high speed grounding of the 49-metre Kvaerner Fjellstrand Ro-Pax ferry San Gwann near Ibiza in Spain last week should remind us of safety considerations. As I have commented so many times before, my extensive research shows conclusively that these fast aluminium catamarans are the safest passenger-carrying craft around. Despite “hitting the bricks” at speed due to obvious operator error, none of the 47 people on board were seriously injured. Indeed, only 25 passengers were injured at all. This is testament to the stability and near unsinkability of catamarans combined with the cushioning “crumpability” of their aluminium construction. It is frightening to imagine what could have happened had San Gwann been a steel monohull.

There is all this and much more coming up through this week on Baird Maritime. Don’t miss it!


– “Originally designed to transport 700 passengers on short sailings between Turkey and Greece, the ferry has now been converted to accommodate up to 50 guests on one-week itineraries in Scotland’s lochs, canals, and inter-island routes.”

– “It is the acute and urgent changes to the economic ecosystem of the cruise business that will mean, by 2030, cruising will be unrecognisable from the industry that set sail at the start of the decade.”

– “Even worse, with the simultaneous development of appropriate electric propulsion systems, the fuel cost differential between the environmentally clean, Incat-proposed, electric-powered ships and the comparatively dirty, gas-guzzling Finnish ferries will be simply astounding.”

– by Neil Baird, Co-Founder and former Editor-in-Chief of Baird Maritime

COLUMN | Shipbuilding in Australia: why would you do it? [The Boroscope]

– “In a world in which Australia is increasingly becoming isolated, we are dependent on almost everything from overseas.”

Any news or views about the global maritime tourism, ferry and cruise industries? Send it through to [email protected] ASAP (between now and September 10), so we can add it to this current edition of Passenger Vessel Week!