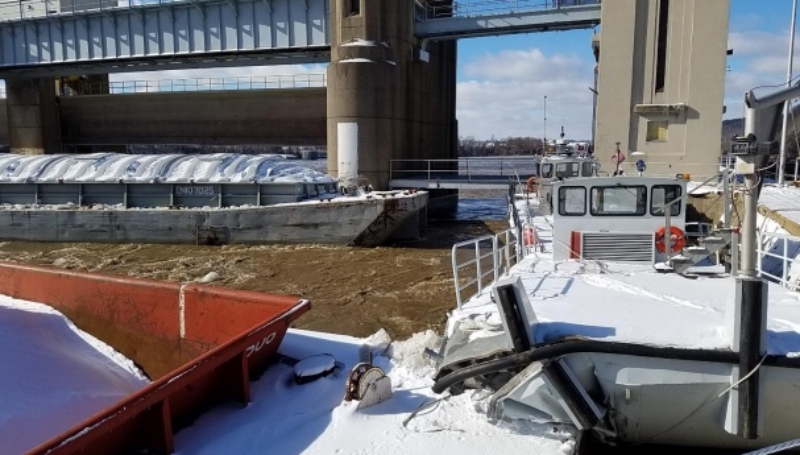 The National Transportation Safety Board (NTSB) has published a report containing safety recommendations issued to the US Coast Guard (USCG) and the US Army Corps of Engineers (USACE) based upon findings of an investigation of a January 13, 2018, barge breakaway.

On that date, 27 dry cargo barges broke away from the Jacks Run fleeting area of the Ohio River near Emsworth, Pennsylvania.

The breakaway caused US$12.5 million in damage, including the total constructive loss of two USACE vessels. Of the 27 barges involved in the breakaway, seven were lost and all but one of the remaining 20 required repairs.

While the dams at the USACE Emsworth Locks and Dams complex were struck, the accident did not cause structural damage to the dams.

An unknown amount of coal and cement was released into the Ohio River.

There were no injuries reported in connection to the accident.

Record rainfall on January 12, 2018, caused a water level rise of more than 12 feet (3.6 metres) in the six hours preceding the breakaway. Earlier that month, freezing temperatures at night and above temperatures during the day caused ice formations on the river to thaw, break free, and float down river before freezing again, resulting in ice build-up at the head of the barge flotilla moored in the Jacks Run fleeting area.

The NTSB’s investigation determined the failure to prevent shoaling and to maintain the fleeting area’s mooring cells resulted in inadequate mooring arrangements during highwater and ice conditions which caused the barge breakaway.

The USACE’s and USCG’s lack of resources and authority to effectively inspect fleeting areas and to ensure fleeting areas are maintained contributed to the accident, according to the NTSB’s Marine Accident Brief.

The first safety recommendation issued to the USACE seeks a requirement for fleeting area permittees to submit waterfront facility operations guides to the USACE for review to ensure adequate operating procedures for highwater and ice as well as adequate maintenance procedures. The second recommendation was issued to both the USCG and the USACE, seeking a joint policy to ensure fleeting areas are maintained in compliance with permit requirements.

The third recommendation, issued to the USCG, seeks development of a regulated navigation area for the Pittsburgh, Pennsylvania, region to ensure the integrity of fleeting areas, with detailed requirements for barge moorings during highwater and ice conditions.