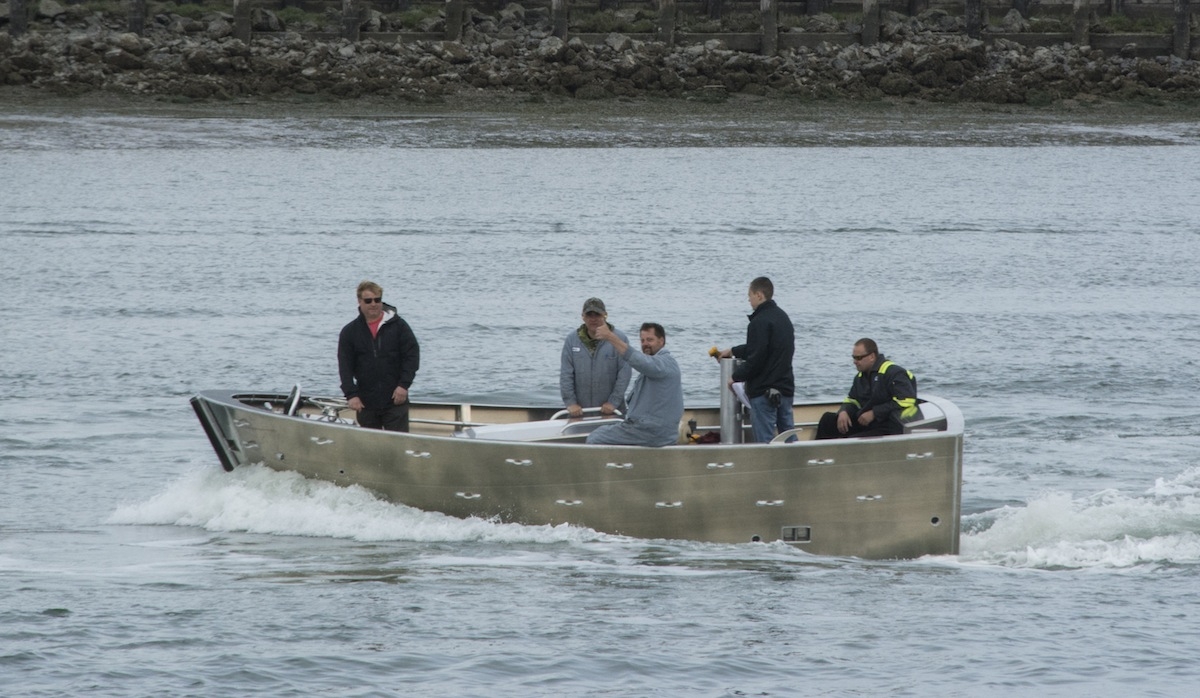 Dirk Rozema’s grandfather, Alle, was building wooden power skiffs with gas, Chrysler Crown engines a few years after he arrived from the Netherlands in 1949. After his son, Clarence, joined the family’s Bayview, Washington business, they tried a few diesel powered steel skiffs around 1970. Excessive weight on the steel skiffs soon led to Rozema’s first aluminium skiff, which would have been delivered in the mid-1970s.

The light weight of the skiff assured that all future seine skiffs for Alaska’s 18-metre limit seiners would be aluminium. Today the sight of a seiner with a big skiff resting on its skids and sitting on the seiner’s stern, like a duck on its mother’s back, has become a familiar sight along the Pacific coast of America. 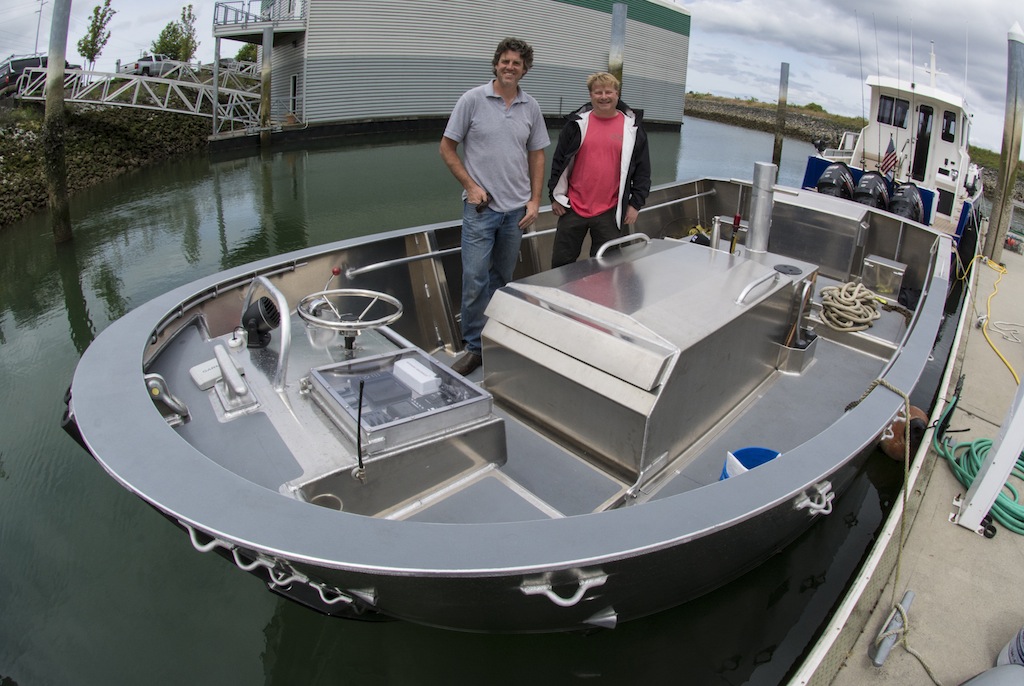 While the design concept is well proven there continue to be incremental modifications as owner-operators, like Swen Gildnes, test the limits of their skiffs.

“I don’t want my skiff man to throw the line from the skiff to the guy on deck,” he says of a frequent occurrence when the line from the skiff end of the net is passed up to the seiner. “With the steering console back by the tow post this happens. If there is a miss the line goes in the water and we have to retrieve it which slows us down and breaks the rhythm of the set.”

Gildnes’ solution was elegantly simple, move the wheel and controls to the bow, which is the first part of the skiff to reach the seiner. Swen points out that he is not to first to have done this but it is not the usual form. These forward controls allow the skiff to easily pass a line up to the deck before going smoothly and quickly out under the towline at the stern of the seiner.

As he does this he releases the shackle on the end of a towing strap that runs from the end of the three-and-a-quarter strip by a 275-metre net to a metal quick release clamp on the skiff’s tow-post near the stern. The release is via a hydraulic assist controlled by a button on the forward mounted console. 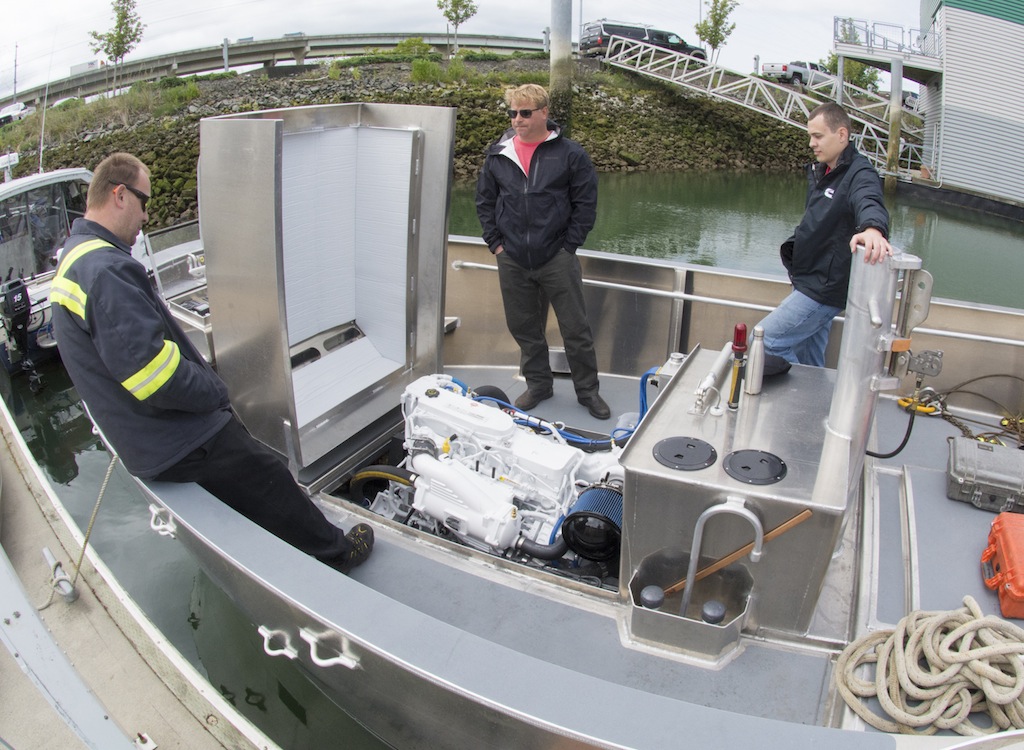 Dirk and Swen grew up together and Dirk’s dad built skiffs for Swen’s dad. There is a lot of community and trust between the two men. It is the perfect balance of tradition and innovation. Rozema builds three sizes of skiff: 6.1 by 3.4 metres; 5.5 by 3.0 metres, or, their latest model, like the one for Swen, 5.8 by 3.0 metres.

“It has just a little more boat behind the tow post,” explained Dirk.

The new skiff weighs approximately 3,500kg with its engine, a Cummins QSB 6.7L, 230kW at 2,600rpm, with a Twin Disc MG5061-SC at 2.43:1 reduction. The engine turns a 0.7-metre propeller in a steerable, cast aluminium nozzle. Rozema has the nozzle cast and machined for a 6.35mm thick stainless steel band that they insert inside the 0.7-metre nozzle around the path of the prop tips.

The nozzle increases the thrust by about 30 per cent and helps make up for the reduced efficiency and drag of the big skids required to allow the skiff to be pulled up on the stern of the seiner and to provide a net guard. The skids are covered with a strip of neoprene to aide the lift as well. Aluminium struts are welded in place along the skids for additional strength. Keel coolers are mounted in the protected space between the struts.

While the under water assemblage reduces the efficiency, Rozema estimates that the 5.8-metre skiff/tow-off boat still has about 2.7 tonnes of bollard pull.

The new power skiff will be teamed with Swen Gildnes’ 17-metre, 450kW seiner Northern Spirit. It will replace an older skiff powered by a 185kW Cummins 6B. The skiff is fitted with a new device known as a “skiff tracker” that transmits, through an antenna, to the chart reader of the seiner, the skiff location, heading, speed and depth of water.

“This is primarily for the foggy days, but our skiff is often right in on the beach so as not to let any salmon get by,” Swen, who fishes out of Cordova, Alaska, explained. 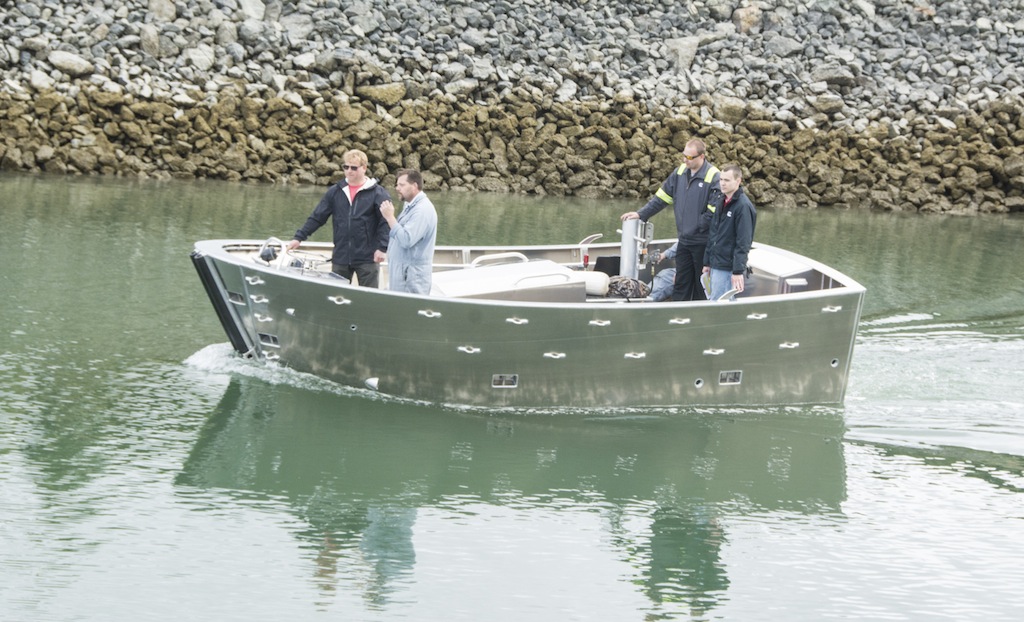 For the sea trials, Swen had flown down from the Copper River sockeye fishery where he has a bow-picker. On May 6, Swen headed north through Canada for his Alaskan fishing grounds. For ease of travel he sent his new skiff north on the deck of a large tender boat.