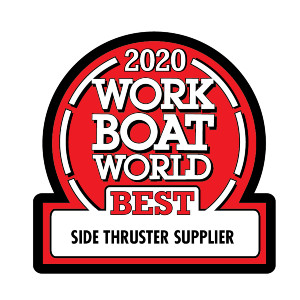 Papendrecht, Netherlands-based Veth Propulsion marks 70 years in business in 2021. Specialising in thrusters and rudder propellers, the company has also sold, serviced and re-manufactured diesel engines for most of its lifetime.

Since 2018, Veth has been a subsidiary of the huge American gearbox and propulsion system manufacturer Twin Disc. This has ensured a truly global spread of sales and service stations for Veth.

The company has supplied side thrusters and rudder propellers to every imaginable kind of ship and boat globally. These range from tugs, trawlers and yachts to dredgers, tankers, ferries and warships. Their owners are everywhere and, clearly, are very satisfied with Veth products because they keep specifying them. They are frequently mentioned on these pages.

“Our brand is known for its reliability and specifically for the service we offer,” Veth Propulsion Manager, Sales Department, Maarten Jansen told Baird Maritime, “not only in the field but also during the design stage. Veth also develops and produces its own control systems and is therefore capable to service even the oldest units in the field with genuine spare parts, which are all in stock.

“Veth can offer a wide range of side thrusters, not only limited to the normal tunnel thruster, but also the low draught units with horizontal propellers, which can be used as a side thruster as well as emergency propulsion. These thrusters will work already at a draught of approximately 0.3 metres.”

Jansen added that the company has always banked on its experience, having supplied over 4,400 thrusters of various types to its many customers worldwide. Its products have also been hailed for being innovative while at the same time capable of meeting the latent needs in different markets. Also, ever since it became part of the Twin Disc group in 2018, Veth is able to serve its customers even more effectively thanks to Twin Disc’s global service and distributors network.

With a greatly expanded sales and distribution network, Veth took the opportunity to introduce new key product offerings in 2020.

“One of these was our Integrated electrical L drive,” said Jansen, “which has been well received by the market. It was developed in 2018 and a number of orders have been received. Due to its extremely low installation height and integrated permanent magnet E-motor, the unit offers space and weight savings in vessels that have limited installation possibilities such as superyachts, ferries and offshore vessels with low aft decks.”

Jansen added that, due to the ongoing electrification, these units are in great demand for use on the newest electrically propelled vessels.

Another notable product, though one yet to be officially introduced by the company, is the counter-rotating propeller Integrated model with 3,000kW input, which will be launched this spring.

“A major advantage of a horizontal propeller is that optimum thrust is achieved even at minimum draught,” explained Jansen. “This is achieved without vulnerable parts sticking out from under the ship. These shallow draught thrusters also have high thrust at speed because the propeller draws in the water over a short length.”

Even with the introduction of new and innovative – and ultimately generally well-received – products, 2020 also proved to be a challenging year for Veth. Fortunately, it did not take until the end of the year before the company finally adopted a more optimistic view of 2021 and beyond.

“We saw a slump in the order intake in the second half of the year, caused by delayed projects. A good number of projects have been revitalised, ordered and we now see an upward trend in the amount of orders again. The future looks hopeful with all the new developments on electrical propulsion and we are happy and proud to be one of the front runners with our integrated electrical thrusters.”

When asked what the future of the side thruster market would look like, Jansen commented about the growing trend towards electrification as well as thruster design being influenced by ship design and lower-speed vessel operations, which then result in lower emissions and fuel consumption. This will be especially true in the commuter ferry segment, where the focus is gradually being oriented towards green energy.

“We also see a stronger co-operation between thruster builders and electrical system integrators,” Jansen told Baird Maritime, “so they can offer a complete package together that will save the shipbuilder and operator time and worries. Offering regular maintenance packages will also happen more often in the future.”