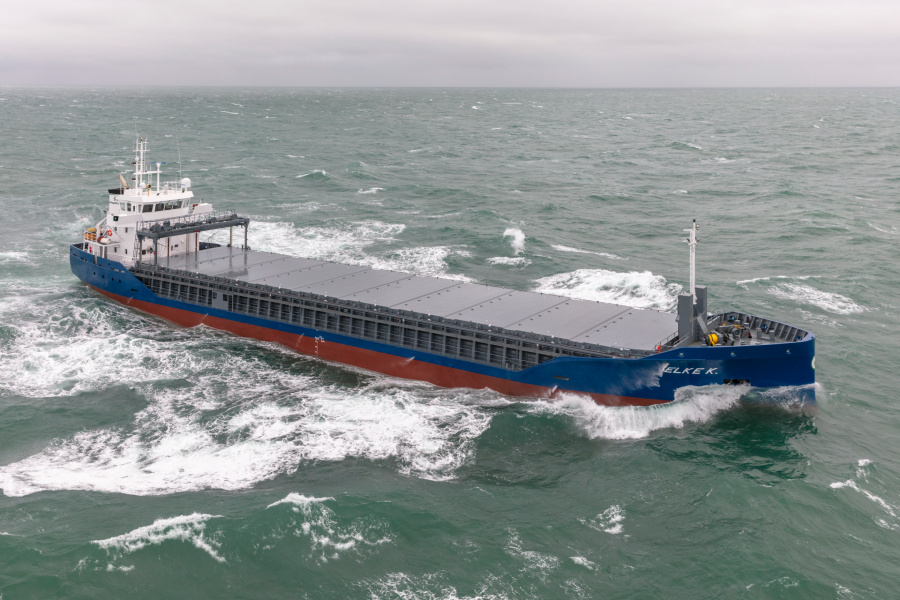 Classed by Bureau Veritas and sailing under the Dutch flag, Elke K is currently the largest vessel in the Alster Ship fleet with an LOA of 86.93 metres, a moulded beam of 15 metres, and a deadweight of 5,150 tonnes. The newbuild also has a depth of 7.15 metres and a maximum draught of 6.35 metres.

Elke K boasts a singular hold that is capable of accommodating both bulk and breakbulk cargo and that has a total capacity of approximately 6,258 cubic metres. The hold also features 10 pontoon hatches and an electric gantry crane for opening and closing the hatch covers as well as for the positioning of the bulkheads. The hatch covers and the crane were supplied by Coops and Nieborg, a deck equipment specialist that, like Royal Bodewes, is located in the northeastern Dutch community of Hoogezand.

Elke K and its sisters were designed in response to the operator’s need for the greatest possible total cargo capacity in a ship whose gross tonnage remained less than 3,000 tonnes and whose load line length did not exceed 85 metres. Both attributes were deemed important vessel parameters as they had a direct impact on harbour fees, insurance costs, as well as crewing and navigation requirements. For instance, vessels with a load line length below 85 metres are not required to carry a freefall lifeboat. Royal Bodewes claims that not only does this have an advantageous financial aspect, it also frees up additional deck space. 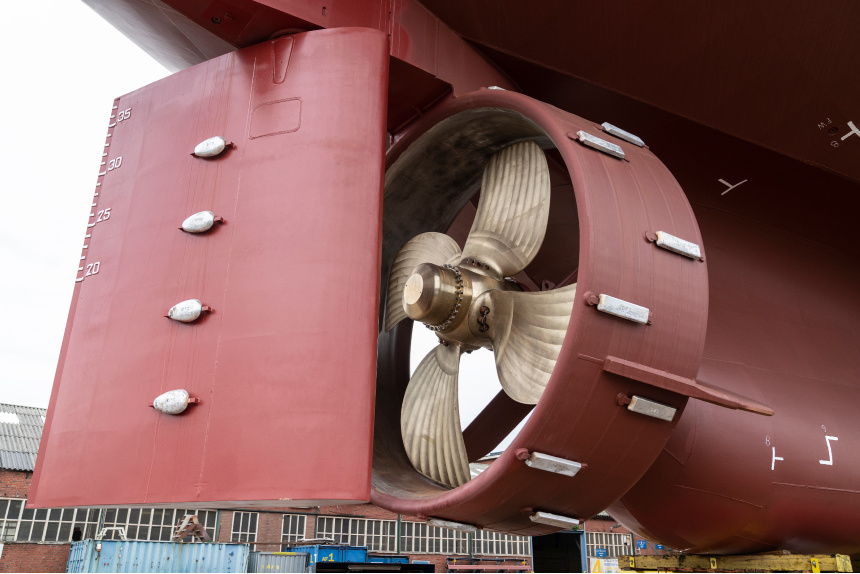 To allot as much onboard space as possible for cargo, Royal Bodewes decided that the vessel’s engine would not be powered by heavy fuel oil (HFO) and would thus not require additional space for accommodating heating coils or boilers. Instead, the main engine operates on marine gas oil (MGO) and is therefore smaller, ensuring that the internal volume that would otherwise be occupied by coils or boilers would be added to the ship’s already impressive cargo capacity. The main engine chosen for Elke K is a 1,740kW Caterpillar-MaK 6M25C engine connected to a Caterpillar nozzle-mounted, controllable-pitch propeller to give the vessel a speed of approximately 12.5 knots.

Elke K is also notable for having what Royal Bodewes says is an energy-saving bow design, an important feature that satisfies Alster Ship’s requirement for an environmentally friendly vessel. The more streamlined bow leads to less fuel consumption over the same distances, and this in turn means reduced CO2 emissions.

The unique bow design also makes for excellent seakeeping even in the harsh conditions of the Baltic and North Seas where the vessel and its sisters are expected to sail regularly, as Royal Bodewes explained to Baird Maritime:

“The double hull design is characterised by the bulbless straight bow, with an almost vertical stem profile. The stem is straight with an upper slope, and this enables the vessel to slice easily through the waves facing less resistance. We are therefore convinced that the hull – and the ship itself – will earn its keep even as the weather gets worse.”

Royal Bodewes further claimed that, even with the cargo hold capacity being maximised, Elke K’s interior still allows all electrical equipment to be readily accessible for repair, removal, and maintenance. The electronics therefore needed to be reliable, and Alster Ship subsequently opted for the installation of a complete electronics package from Furuno. Power for all onboard electrical systems is provided by a pair of Caterpillar 129kW generator sets. 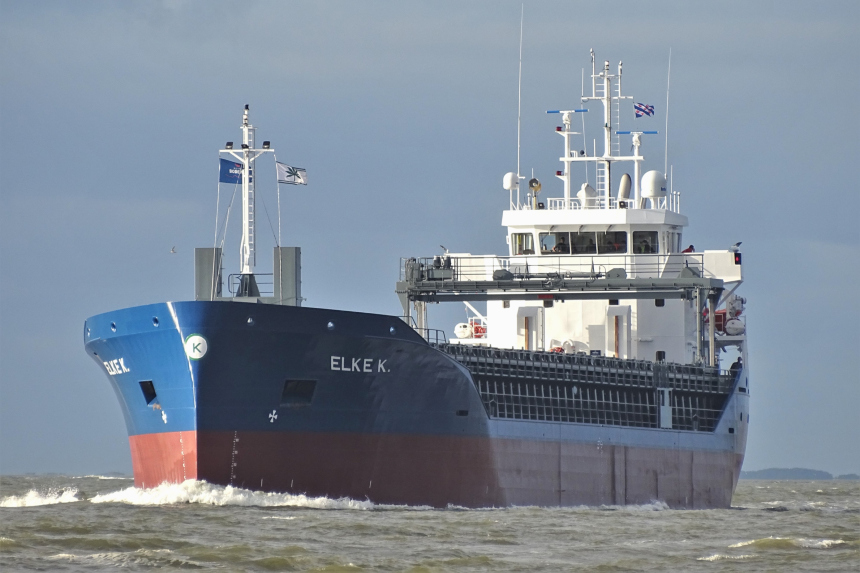