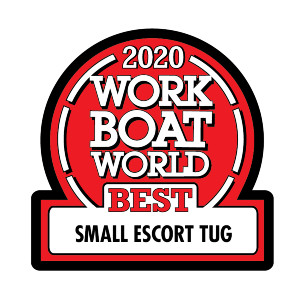 A traditional-looking American tug designed by one of the world’s most renowned tug designers to incorporate all the most modern features and equipment.

Robert Allan Ltd has, using a customised standard design, produced what Baird Maritime judged to be the Best Small Escort Tug for 2020. The very experienced owner is the New Orleans-based EN Bisso and Son, which is also a leading tug operator on the Mississippi River and along the Gulf of Mexico.

The company knew exactly what it wanted and now has a compact 24-metre Z-drive tug with 60 tonnes bollard pull that looks exactly the way they wanted it to.

“A. Thomas Higgins is a compact, manoeuvrable and powerful tug,” Robert Allan Ltd (RAL) told Baird Maritime, “based on the 2016-built Gladys B, which was the prototype vessel for this new tug and sister C.D. White. Gladys B was originally designed for operations in the Gulf of Mexico, and Bisso made an agreement to purchase the tug while still under construction.

“Although Bisso is quite happy with Gladys B, the company realised that modifications needed to be made to the standard tug design to make it more tailored to its operations.  For A. Thomas Higgins, the overall key dimensions and layout of the tug are the same as with Gladys B, but customised to better suit Bisso’s operational requirements – ship assist and escorting operations on the Mississippi River in and around the New Orleans area.”

As a result, A. Thomas Higgins is classified as an escort tug but one that is built specifically for handling the strong currents on the Mississippi year round. RAL achieved this by limiting the area of the skeg in order to give the better manoeuvrability when handling ships in the river currents.

“We reduced the profile of the skeg and put a window in the aft part of the skeg, effectively reducing the profile area of the skeg by 40 per cent as compared to Gladys B, while still allowing a sufficient platform for docking the tug.”

Another improvement that A. Thomas Higgins had over Gladys B was the use of grid coolers mounted in recesses in the hull for machinery cooling purposes. The older tug had a raw water/heat exchanger cooling for the main machinery, which works well in the Gulf of Mexico but is prone to clogging when operating along the debris-laden Mississippi River.

The design work that went into A. Thomas Higgins was the result of full collaboration with the client, a practice that RAL has been implementing in response to the market’s ever growing demand for compact yet powerful tugs.

“Currently,” the company told Baird Maritime, “we are seeing increased market pressures to deliver high-power tugs at very cost competitive purchase prices. As a result, we are working with our clients to optimise both existing and new designs to increase the functionality and towing and escort performance of more compact, high-power tugs while decreasing the build cost through construction efficiencies.”

RAL reiterated that, throughout the process of increased collaboration, it still works towards upholding the high safety standards for which its tug designs are best known.