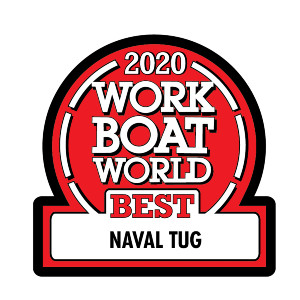 Remarkably, for a US Government organisation, the United States Navy has never been reluctant to use foreign intellectual property. In fact, in the area of ship design, it is reasonably common.

In the case of this US Navy yard tug and its sisters, they have again gone to a near neighbour in Vancouver, Canada. Robert Allan Ltd (RAL) is widely renowned in the world of tugs even though it is based relatively out of the way.

These new yard tugs, of which Rainier is the first, are a development and refinement of the YT 802 class that RAL designed for the navy some years ago.

Interestingly, for a navy, that refinement included input from the tugs’ crews. Designed to efficiently handle a wide variety of shapes, sizes and types of warships and barges, these low emission, 27-metre tugs produce a useful bollard pull ahead of 43 tonnes and 44 tonnes astern. They can transit at 12.5 knots. Arguably, perhaps, these comfortable, safe and efficient tugs would be the best naval tugs in the world.

“The aft wheelhouse and flat foredeck,” RAL told Baird Maritime, “are optimised for working under vessels with large bow flare, such as aircraft carriers.”

Incorporating this feature was deemed necessary during increased collaborations wit the customer, a practice that RAL has also adopted in its other tug newbuilding projects with the aim of optimising designs to increase functionality and performance and reduce construction costs. In fact, as stated by RAL shortly after the vessel was delivered in 2020, many of the modifications incorporated on Rainier were influenced by feedback from crews in addition to the navy’s own requirements.

“The US Navy ordering more of this series of tugs is a strong vote of confidence that they like these vessels’ performance,” commented RAL.

Further, the fact that the vessel is an improved variant of an earlier tug series ordered by the navy means there will be less time and resources to be devoted to crew transition training, particularly in the case of crews who already have considerable experience in operating the older RAL tugs in the navy’s inventory.