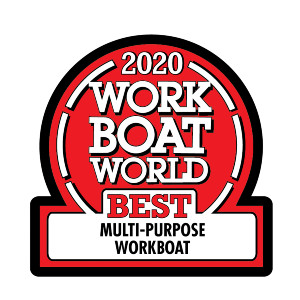 The Polish government ordered this very impressive pair of truly multi-purpose workboats from the yard of Remontowa Shipbuilding, a member of the Remontowa Holding Group, in 2018. They were delivered in late 2020.

Appropriately for operations in the Baltic Sea, they are ice class and should be able to operate along the Polish coast in almost all conditions. At 60 metres LOA, they have plenty of heft. They also have plenty of power from their diesel-electric propulsion systems.

They can operate at 13 knots and have a 40-tonne bollard pull. DP equipped, these icebreaking tug/workboats can perform a multitude of roles. Salvage, SAR and towing are obvious but they have also been equipped for hydrographic and oceanographic survey and research; buoy tender work; and, among other things, oil spill and pollution control and collection. They should do very well and will likely inspire many imitations.

“A diesel-electric propulsion system, dynamic positioning, a deck crane, and SCR are just some of the attributes that make these vessels special,” Remontowa Shipbuilding told Baird Maritime. “Besides performing their main roles of navigational aids maintenance, pollution response, and research, they are also equipped for transport, salvage, firefighting, icebreaking, and search and rescue (SAR), making them highly valuable assets of the Polish government.

Completing these highly versatile vessels and putting them into service was no mean feat for Remontowa Shipbuilding, which, like other businesses around the world, needed to make significant changes to their daily operations to minimise the impact of the Covid-19 pandemic.

“Despite numerous external difficulties caused by the pandemic,” the builder remarked, “we were able to deliver nine vessels last year. These also included four tugs for the Polish Navy and three hybrid diesel-electric Ro-Pax ferries for a customer in Norway. Beyond that, construction continued on ten other vessels, nine of which will be delivered this year.”

The company added that these individual newbuilding projects each presented its own set of unique challenges.

Remontowa Shipbuilding further built up on its earlier success by conducting advanced negotiations with potential contractors, thus increasing the likelihood of more newbuilding orders being secured in future.

“Overall,” the company told Baird Maritime, “2020 was a prosperous year for us and so we believe that 2021 will be equally fruitful for us as well.”

Remontowa Shipbuilding commented that, like other Polish shipbuilders, it looks forward to 2021 and beyond with the readiness to adapt to the new normal and to embrace increasingly important trends at the same time, such as reducing carbon footprint and operating costs.

“We expect that the use of alternative fuels will have a steadily growing impact on vessel design and construction,” the company said.

Remontowa Shipbuilding, however, admitted that the ongoing pandemic will continue to pose limitations on the Polish workboat industry, particularly in securing new orders.

“Although we will continue to welcome interest from overseas,” Remontowa remarked, “a huge chunk of the industry’s client base will be formed by domestic operators, mainly the navy.”