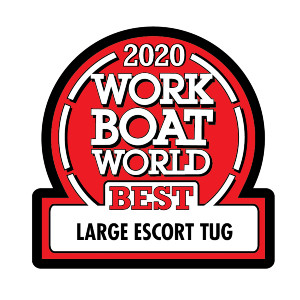 The Chinese port of Ningbo-Zhoushan is located south-east of mega-city Shanghai. Set in a still very beautiful area where the rich of Shanghai once had their beach villas, it is acknowledged to be the biggest and busiest port in the world by tonnage.

Handling the concomitant world’s largest container ships, tankers and bulkers, therefore, requires some mighty tugs. They also have to be low emission tugs that will help to preserve the delightful local environment.

Robert Allan Ltd and the tug’s local builder have produced a dual fuel, diesel and LNG vessel, that will achieve those requirements. The FiFi 1 tug produces 80 tonnes bollard pull using either gas or diesel fuel and can reach 13.5 knots.

Powered by Niigata main engines driving through Kongsberg Z-drives, it has a range of 700 nautical miles on gas and 1,700 nautical miles on diesel. The vessel displaces 1,191 tonnes and has a 55-cubic-metre gas tank fitted below deck. This is a very impressive vessel, indeed.

“She is the first in a new series of dual fuel tugs that we designed,” RAL told Baird Maritime. “She is also the first dual fuel tug owned and operated by a port in China. The single LNG tank fitted onboard is the biggest LNG tank fitted in a ship-handling tug so far, and since its delivery early in 2020, she has demonstrated her excellent performance as a ship-handling tug along with a significant reduction of SOx, NOx, CO2, particulates, etc.”

In response to Ningbo Port’s ambitious green port plan, RAL teamed up with the technical department and towing company of the port to initiate an evaluation process of developing a customised “green tug” back in 2012. The comprehensive evaluation process covered all foreseeable aspects of a green tug at that time, as well as their suitability to the port.

“During the evaluation process, the propulsion system configuration was the first system evaluated, and a dual fuel system with a single horizontally placed LNG tank was selected after comparing with pure gas system and alternate LNG tank configurations. The other major evaluation work included gas system safety analysis, economic analysis, and main engine acceleration performance from idle to full speed.

The development effort that went into Yong Gang Xiao Tuo 60 was indicative of RAL’s own policy of increased collaboration with customers, which was also applied in many of the other successful tugs that were designed by the company in recent years. The goal is to increase functionality as well as towing and escort performance while making construction more efficient, thus minimising building costs and making sure vessel size is kept as compact as possible.

“It is critically important, though,” RAL told Baird Maritime, “that throughout this, we still maintain the high safety standards that our designs are renowned for.”