When French operator Transport Express Caraibes (TEC) needed a new vessel capable of carrying 10 tonnes of cargo at speeds of 20 knots, it turned to French, China-based shipbuilder ODC Marine to fulfil this unique requirement. ODC Marine had earlier supplied TEC with two 18-metre, high-speed boats for shuttling tourists between the islands of Martinique and Saint Lucia in the Caribbean, and recently handed over a third newbuild vessel, but one that is more optimised for the cargo transport role.

Capo Rosso V, the first fast cargo boat in the French Caribbean Sea, has the same general dimensions and belowdeck layout as the tour boats Capo Rosso and Capo Rosso 2, which ODC Marine handed over to TEC in the second half of 2020. However, the remainder of the deck space was reconfigured to maximise the vessel’s freight transport capability, and so the available space for passengers was significantly reduced.

The builder added that the owners were also looking for a vessel with a 3.5-cubic-metre positive cold hold for storing goods at five degrees Celsius, a hydraulic crane for onloading and offloading of light one-cubic-metre containers, and comfortable seating for 12 passengers in a dedicated saloon.

Designed in association with Mer et Marine, the all-aluminium Capo Rosso V has an LOA of 19.4 metres, a beam of 4.7 metres, and a displacement of 32 tonnes at full load. Two Volvo D13 diesel engines that each produce 372 kW at 1,800 rpm drive ZF S-class propellers via ZF 360A gearboxes.

“The Volvo engine setup offers a continuous duty rating, making it possible for the vessel to work at full speed carrying a full load without increasing maintenance costs. The engine can also be fitted with an SCR system to ensure compliance with IMO Tier III emissions standards.”

Added manoeuvrability for navigating in close quarters is provided by a 10kW Quick bow thruster.

Even with limited space, the passenger saloon was designed to be as comfortable as possible. Installed within are 12 upholstered seats, a honeycomb panel ceiling, a synthetic teak floor, and air conditioning. The saloon on Capo Rosso V has an access door on either side, and the doors were designed so that they will not get in the way of people walking on the outer deck even if they remain open.

As is the case on its passenger-carrying sisters, Capo Rosso V features a slightly raised, AC-equipped wheelhouse to ensure improved all-round visibility for the two crewmembers. The wheelhouse electronics include a Marinelec Technologies monitoring system and a Simrad package consisting of a radar, an autopilot, and a GPS. Power for the electronics, the cold hold, and the AC units is drawn from an Onan generator and Optima batteries.

Although the vessel utilised a proven overall design that is already in operation, the construction nonetheless posed some unique challenges.

“The vessel was designed to comply with French rules for coastal cargo transportation (division 222) and the Code of Safety for Small Commercial Vessels Operating in the Caribbean (SCV Code), which allows extending a vessel’s operational area to Caribbean countries,” ODC Marine told Baird Maritime. “The challenge lay in complying with those same rules without increasing the vessel’s weight or its fuel consumption.”

Another challenge was in ensuring a comfortable interior space in the passenger saloon without decreasing the deck space needed for the 10-tonne payload. Fortunately for ODC Marine, it was able to achieve a reasonable fuel consumption level of 125 litres per hour, thus validating the efficiency of the vessel’s final design.

“Also, we believe the work that went into complying with division 222 and SCV Code rules proved its value as an ideal safety standard to be proposed to areas without already established rules, especially for shared archipelagos between two or more countries.”

The vessel also comes equipped with a Survitec liferaft should evacuation become necessary.

Capo Rosso V was delivered in the middle of this year and has since been providing fast freight transport services along TEC’s Caribbean routes. 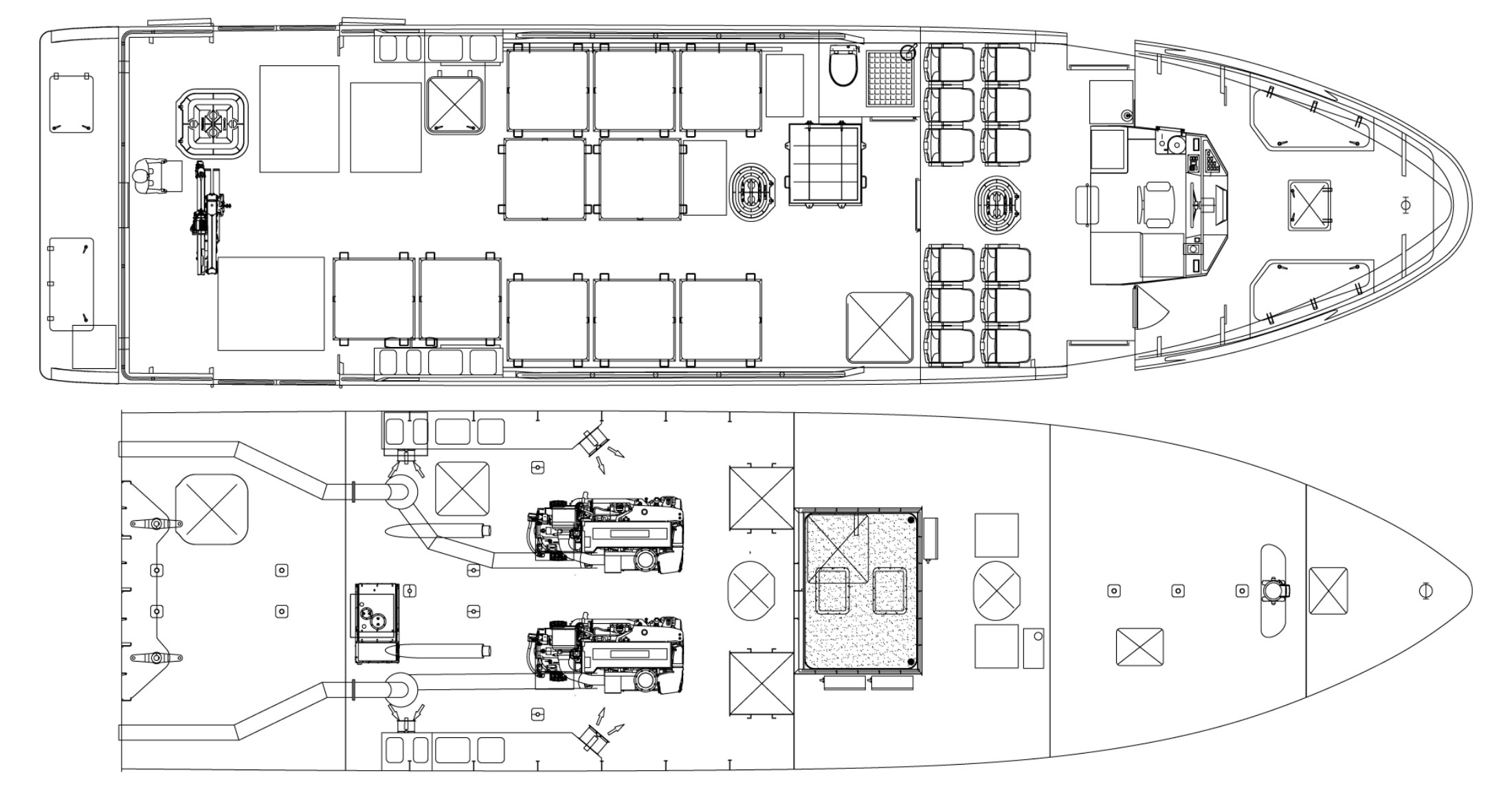