Transports Express Caraïbes, a French company that specialises in shuttling tourists between the islands of Martinique and Saint Lucia in the Caribbean, has invested in two high-speed passenger vessels in a series built by ODC Marine in Dalian, China.

The first vessel, Capo Rosso, has already begun operational sailing while sister vessel Capo Rosso 2 is in the final stages of construction and is scheduled to be delivered to its new owners before the end of the year.

The newbuilds were designed by French naval architecture firm Mer Et Design to provide a host of improvements over the attributes of the operator’s first vessel, which was named Capo Rosso 1. Although Transports Express Caraïbes managing director Patrice Amanou said this vessel had essentially enabled the company to venture into the region’s highly lucrative tourist transport market in 2014, he claims it became evident early on that boats that provided greater passenger capacity, improved comfort, higher operating speeds, and reduced environmental impact were needed as well.

Capo Rosso and Capo Rosso 2 each have hulls made from marine grade aluminium, a length of 18 metres, a beam of 4.7 metres, a displacement of 29 tonnes at full load, a toilet, and seating for up to 84 passengers including persons with disabilities (PWDs) in the main cabin. The passengers’ seats are compliant with IMO standards for high-speed craft, and the main cabin features soundproofing design elements by France’s Delhom Acoustique to reduce outside noise to 75 dB, or approximately the same sound level as that heard from inside a moving car.

Storage for cargo such as passenger luggage is available in lockers on both the main deck forward of the wheelhouse and just below. On top of the main cabin are four solar panels to provide emissions-free charging power for the onboard service batteries.

The flooring for the main deck is made from synthetic, non-slip teak provided by Norway’s Flexiteek. ODC claims that, in addition to being around 35 per cent lighter than most similar boat flooring materials, it requires less maintenance and actually contributes to the vessels’ soundproofing.

The newer boats are similar to the Capo Rosso 1 with respect to their wheelhouses being raised slightly above the main cabins to guarantee improved all-round visibility for the crew. To further enhance the crew’s situational awareness, each wheelhouse has been fitted with a monitoring system supplied by Marinelec Technologies.

Instead of having an assortment of gauges and other visual indicators that state all aspects of the condition of the vessel, the monitoring system consists of a single touchscreen through which the crew can assess the various onboard systems. An alarm relays real-time information to the crew about any anomaly in the vessel itself to facilitate immediate decision-making and, if necessary, to allow preventive maintenance on the affected systems to be carried out in less time.

Two Volvo Penta D13 IMO Tier II-compliant engines each rated at 372 kW drive a pair of ZF ISO Class S reduced-vibration propellers to give the boats a maximum speed of 20 knots at full load. Also, due to the vessels’ tunnel hull design, resistance in water is minimised, and this translates into a stable ride even in rough seas and fuel consumption per hour being limited to 125 litres.

The design of their hulls not only enables Capo Rosso and Capo Rosso 2 to reduce the normal travel time along the estimated 20 nautical miles between Saint Lucia’s Rodney Bay and the Martinique town of Le Marin by as much as 15 minutes, they are able to accomplish it with what Mr Amanou claims is a 40 per cent improvement in fuel economy compared to the Capo Rosso 1.

Lastly, a special water-based paint supplied by industrial coating specialist Mäder was used on the boats’ hulls to further reduce their environmental impact. 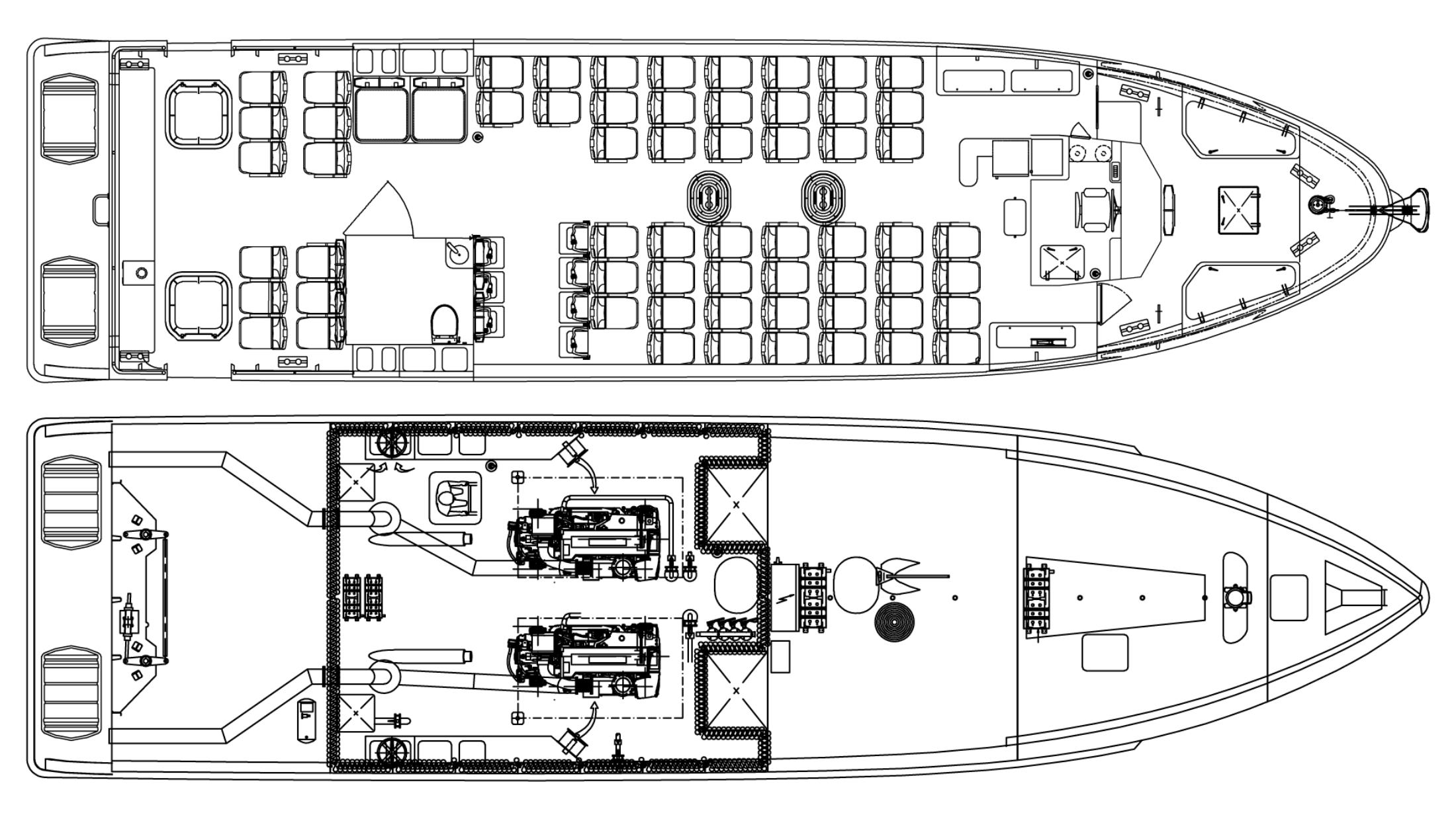