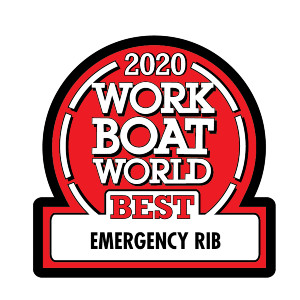 Too small to be individually named, these very impressive, air-liftable or truckable, vehicle-carrying inflatable boats are unique.

At 6.7 metres LOA and three metres beam, these outboard-powered craft have a payload of two tonnes. That means they can carry a small vehicle or up to 20 personnel and their equipment.

Deflated, they are compact and weigh 275 kg complete with compressed air inflating equipment. They effectively have two, catamaran-like hulls and are powered by a modestly powered single outboard motor fixed to a transom between the hulls.

The Japanese Fire and Disaster Management Agency has purchased an initial 36 boats from the English manufacturer. More orders seem very likely to flow as soon as the word gets out.

“These craft are special,” MST told Baird Maritime, “for they bring logistically difficult rescue tasks like large animal rescue and livestock evacuation within the budgetary and vehicle or trailer space constraints of far more fire and rescue services than before. This will revolutionise global urban flood rescue efforts thanks to a combination of shallow draught, payload capacity and transportability.”

Like the FDMA, MST recognised the need for such boats, especially in a country like Japan that has had more than its fair share of disasters.

“The global climatic changes that the world is experiencing are in no doubt anymore and one of the many consequences is more unpredictable and extreme weather events. This craft is specifically aimed at dealing with the aftermath of those.

“There is also a clear demand for greater innovation for such emergency rescue and disaster relief and for new solutions that are created by thinking outside the box.”

The company expects that the inflatable rescue craft will validate this line of thinking when applied to building new disaster response platforms.

MST also felt the negative impact of Covid-19 and other crises in 2020, but remarkably, the company was able make great strides in spite of the limitations that came about during the previous year.

“We have had to adapt just like everyone else,” MST told Baird Maritime, “but the impact has been manageable and we have kept running throughout due to being an active UK defence and law enforcement contractor maintaining frontline marine assets 24/7/365. Brexit, on the other hand, has been a slightly different matter and has delayed contracts noticeably, which has been frustrating for us.

“Still, we are happy to have won contracts in new geographical markets. As a result, our portfolio now includes eight- to 12-metre riverine craft and two new patrol boat series.”

One of the patrol boats will have a length of 19 metres, making it the largest craft to be built by MST to date. This vessel is due to be launched in 2022.

MST added that, despite the relatively simplicity of RIBs in general, the market for such craft is growing and demanding more from manufacturers, as recent trends have shown.

“We see trends towards more capable and quicker craft but also craft with greater flexibility for the users in the face of more unpredictable and diverse threats,” said MST. “This is most prevalent for our blue light services dealing with extreme weather events and why the 6.7-metre inflatable landing craft has been a literal lifesaver for many emergency frontline operators dealing with the challenging environments of urban flood rescue.”

The company commented on marine sustainability as another key area of growth in the RIB market.

“It will get greater focus hopefully with more people helping to engineer and develop craft with lower emissions and in more sustainable ways. This is so that materials can be more easily separated (i.e. recycled and repurposed) at end of life.”