The Fire and Disaster Management Agency (FDMA), the operating body that owns and maintains the Japanese government’s massive fleet of firefighting vehicles, recently took delivery of 36 landing craft supplied by UK-based Marine Specialised Technology (MST). The craft are remarkable in that they are all inflatable yet are nonetheless sturdy enough to transport up to 2,000 kilograms of any mix of small vehicles, cargo, and personnel.

Originally developed by MST for military use, the landing craft have been modified to aid in disaster response by offering operators lightweight and more affordable vehicle/cargo transport alternatives to aluminium- or composite-hulled vessels that serve the same purpose.

With an LOA of 6.7 metres and a displacement of only 250 kilograms each, the landing craft are all small and light enough to be rapidly loaded and deployed via aircraft, truck, or ship to ensure greater flexibility and quicker response times in the event of emergencies, especially in the more remote areas of the Japanese countryside.

Each of the craft can be transported while deflated and packed in a special two- by one-metre valise. Once on-site, the craft can be inflated using high-pressure compressed air bottles, compressors, or traditional foot pumps. There is no need for additional launching and recovery equipment such as specialised trailers since each landing craft can be easily picked up and carried by four people.

The inflatable craft could be operated by fewer personnel and could navigate more effectively in shallow-water areas compared to their counterparts of traditional construction. They are effective search and rescue (SAR) boats for use in instances of flooding in restrictive urban areas not only because of their smaller size and shallower draught, but also because they could accommodate up to 20 people at any one time.

The boats’ durability that enables the transport of relatively heavy loads is a much-appreciated by-product of their design, which utilises a specialised double-skinned material allowing the creation of high-pressure inflatable panels, a deck, and a bow ramp. Combined with an efficient hull design and oversized main sponsons, the material enables each boat to easily accommodate quad bikes, miniature payloaders or excavators, and other small vehicles and to transport these at high speeds across lakes, rivers, or flood waters.

The bow ramp is an important feature of each craft not only for facilitating the easier loading and unloading of cargo, but for its use in actual rescue operations as well, as MST explained to Baird Maritime.

“When used in a rescue scenario, the bow ramp provides direct access to and from the water and facilitates the recovery of casualties, even those on stretchers, with minimal effort. This is essential when accommodating individuals with severe injuries like a suspected spinal injury.

“This will fill a large capability gap by providing an adequate and cost-effective rescue platform for passengers with severe injuries or those who may be wheelchair-bound, and we believe this specification is often difficult to replicate in most other existing craft.” 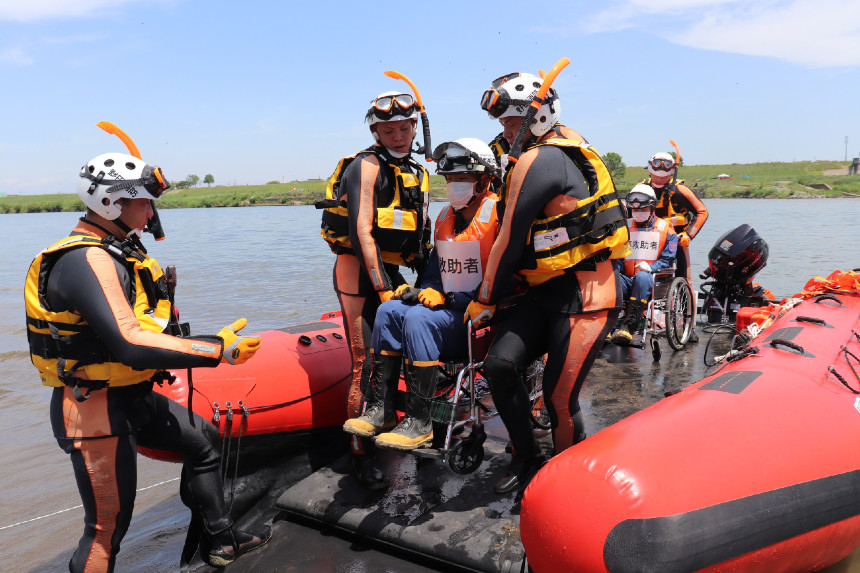 MST also shared some of the details about the work that went into the craft’s low-cost yet highly innovative design.

“The work was accomplished with the aid of 3D design and engineering software which allows the craft’s components to be cut using in-house CAD/CAM-enabled CNC cutting machines for unparalleled accuracy and efficiency of material. The result is highly accurate component manufacturing with less risk of human error and much quicker assembly times.”

The company adds that this particular design and production method had proven so effective in the development of the FDMA boats that it intends to apply the same principles in the manufacture of all the other inflatable response craft in its portfolio.

Each FDMA landing craft is designed to be powered by one petrol or electric outboard engine. MST recommends the installation of a 22kW outboard to guarantee faster transit speeds, though two paddles have also been included to allow the craft to operate in tighter confines where engine power would not be a critical factor.