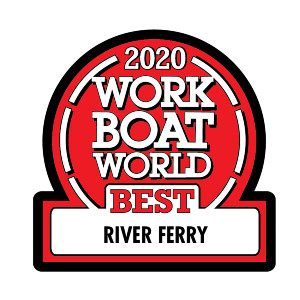 This fine ferry and its three sisters have been a long time coming. The well-known and respected Chao Phraya Express Boat Company of Bangkok has been researching its advance from traditional single-hull wooden ferries for at least twenty years. Now that it has finally taken the plunge, it has done so both stylishly and effectively.

The operator’s new fleet of Australian-designed aluminium catamaran ferries is achieving all that its very canny directors hoped for when they first started to study catamarans.

Well built by local company Asimar Shipyard, the new ferries are faster, safer, much more comfortable, quieter, have lower wash, and use less fuel compared to their predecessors. They are already contributing to a reduction in chop on Thailand’s “River of Kings” and are significantly more attractive to passengers, particularly tourists.

“The introduction of the four-ferry Riva Express fleet was a turning point for our company,” Chao Phraya Express Boat managing director Charoenporn Charoenthum told Baird Maritime. “Specifically, it enabled us to help modernise river transportation for passengers on the Chao Phraya River by providing vessels that guarantee low wash catamaran hulls, faster service, and the ability to load more passengers from 150 to 200 per trip.

“It also meant improvement in safety standards, onboard amenities including air conditioning, real-time vessel tracking system, a PA system, and a smart card common ticking electronic payment system that linked to other mass transit systems within Bangkok, such as newer high-speed commuter trains.”

The modernisation of transport along the Chao Phraya River had indeed been the goal of Chao Phraya Express Boat and Asimar, especially since both companies were quick to recognise the growing trend towards low-emission vessels prevalent in the Thai shipbuilding industry.

“Although Riva Express 4 runs on traditional diesel,” Asimar remarked, “we know the importance of combining low-emission diesel engines with an appropriate hull design to make sure that vessels comply with existing environmental regulations.”

The builder was referring to the ferries’ use of IMO Tier II-compliant engines combined with low-wake wash hulls, guaranteeing the boats will have little adverse environmental impact even with regular heavy use. Still, Chao Phraya Express Boat knows that the adoption of engines with even lower emissions will be inevitable, and so the operator has been devoting more effort to exploring opportunities in this area.

“We are considering equipping our fleet with electric engines in line with Thai government policy,” said Charoenthum. “They have been aggressive in promoting the use of battery-powered vessels along the country’s waterways. We know this will eventually lead to stricter regulations not only in terms of environmental impact but also safety, and we at Chao Phraya Express Boat hope to be able to set the pace in complying with these regulations.”

Although 2020 proved a challenging year for the operator of Riva Express 4, a feeling of optimism remains, thanks in part to the number of new opportunities that it claims are just waiting to be explored.

“Our operations were greatly reduced by the lockdowns and other travel restrictions imposed by the Thai government to prevent the spread of Covid-19,” said Charoenthum. “However, we are confident the situation will be resolved within the year, and so we have been looking into diversifying into related business areas such as transport of parcels and other goods and even further extending our existing routes to other nearby provinces.”

For Asimar, 2020 was business as usual, as the company explained.

“Throughout the year, we were able to achieve our shipbuilding and ship repair targets,” Asimar told Baird Maritime, “including approximately 80 docking projects and deliveries of four river ferries and three river cleanup boats. Beyond those, a further five electric ferries and nine river cleanup boats are currently under construction and are all slated to be delivered within the first half of 2021.

Asimar added that the next couple of years will also be fruitful due to a forecasted growing demand for new investments in the Thai maritime transport sector.

“Demand for more passenger ferries will manifest, especially after the Covid-19 problem is properly addressed by the introduction of effective vaccines. We expect demand will pick up considerably in 2022, and owners and operators will be looking around for yards that not only offer low-emission solutions such as LNG and battery power, but are also known for delivering quality output in a timely fashion.”

Chao Phraya Express Boat also believes that the clamour in Thailand for new passenger vessels will resume in the not-too-distant future.

“The Thai maritime tourism industry is on the rise,” remarked Charoenthum. “With new coastal travel destinations opening up around the country, travelers will require safe, comfortable and efficient transportation to get to and from these destinations.”

Charoenthum added that the resurgence in tourism is part of “Thailand 4.0,” an initiative of the Thai government that seeks to transform the entire country into an innovative and value-based industry. At the heart of this initiative is the Eastern Economic Corridor (EEC) development, under which coastal tourism will be greatly improved especially in the provinces of Rayong, Chonburi, and Chachoengsao.

“With the development of infrastructure and of access to coastal routes, we will see greater potential for both locals and foreign tourists to travel to these exciting new destinations,” said Charoenthum.

Chao Phraya Express Boat and its sister companies under the Supatra Group have already begun working to address this requirement. Among other things, the company is investing in a new electric catamaran after it recognised the success enjoyed by other local operators of similar boats in Bangkok and Phuket.

Chao Phraya Express Boats has also focused efforts on strengthening relationships with other stakeholders. For instance, it has entered into an agreement with Siam Maritime School wherein scholarships and employment opportunities are granted to eligible students of the institute. The company is also heavily involved in both local and global ferry operators’ associations such as Interferry and the Chao Phraya River Tourism Association.

“Networks formed locally and internationally,” Charoenthum said, “will enable us to share best practices as well as adopt new technologies. We greatly value these networks and will continue to work closely with our partners to strengthen our relationships in the coming years and help promote tourism and safety in the Thai marine transport sector.”

Asimar meanwhile believes that the future of the Thai shipbuilding industry lies not only in passenger vessels.

“We project that local demand will increase for environmental care vessels,” the shipbuilder told Baird Maritime. “We delivered a number of water hyacinth-collecting boats in the past year and similar vessels are under construction in our facilities. There will also be demand for rubbish-collecting vessels and oil spill response craft.”