Thai ferry operator Chao Phraya Express Boat Company recently took delivery of four new catamaran vessels in a series for operation on the Chao Phraya River that stretches between Bangkok and the adjacent province of Nonthaburi in the north.

Designed by Australian naval architecture firm Schwetz Design and assembled locally by Asimar Shipyard, the aluminium-hulled newbuilds will sail under Chao Phraya Express Boat’s recently launched brand Riva Express, which the operator promotes as a premium service offering amenities such as air-conditioned cabins and onboard toilets – amenities that are not found on the earlier boats in the company’s fleet.

The new boats, which have been christened Riva Express 1 through 4, are also being made available for charter hire as they had been designed to be used regularly on sightseeing tours of the Chao Phraya River in addition to providing commuter transport services.

“The air-conditioning and the other premium features are in line with our aim of providing the commuting public with the comfort and convenience that are offered by the more popular modes of transport within the Bangkok metropolitan area,” Chao Phraya Express Boat told Baird Maritime. “We felt that our passengers deserved the same standard of treatment that they would get whenever they ride the trains of the city’s numerous modern rapid transit systems; such benefits were not available via water transport until recently.”

Passengers on each ferry are also provided with onboard electronic maps showing the vessel’s position in real-time while in transit as well as life jackets stowed beneath each seat. 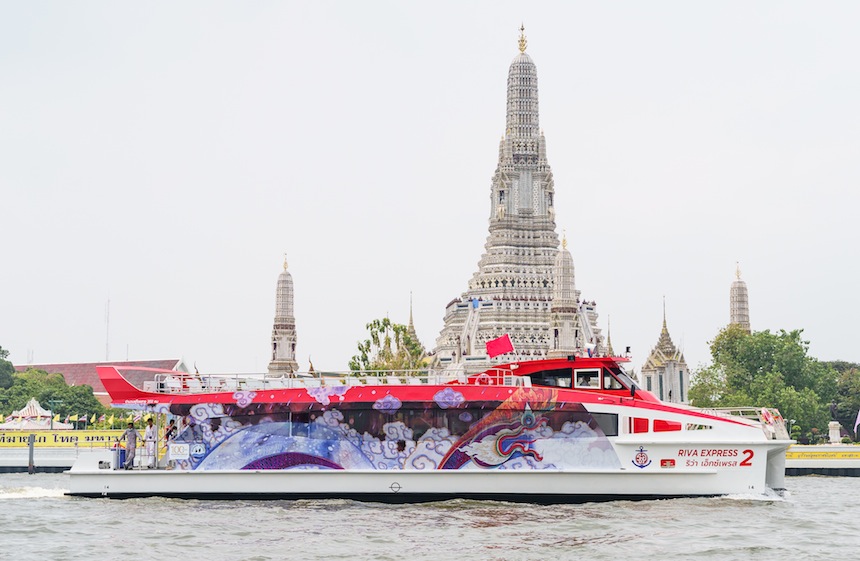 Each of the new ferries has an LOA of 23.95 metres, a moulded beam of 6.7 metres, a moulded depth of 2.8 metres, and seating for up to 146 passengers in an enclosed main deck and another 70 passengers on the open-air upper deck. Power is provided by a pair of Scania DI09 070M 257kW, IMO Tier II-compliant diesel engines that are also equipped with monitoring systems that will allow the crew to track each vessel’s fuel consumption in real-time.

The engines drive two stainless steel fixed-pitch propellers to deliver cruising speeds of between 16 and 18 knots, making the new aluminium ferries faster than their similarly sized, wooden-hulled counterparts that also ply the same route. This enables the new ferries to cover the 15 kilometres of the Bangkok-Nonthaburi route in as little as 30 minutes whereas the older boats in the Chao Phraya Express fleet would take nearly twice as long to sail the same distance.

The propeller shafts on each boat have been installed at a downward angle of eight degrees. This was done to ensure the engine height could be kept to a minimum and to increase the clearance between the hull and the propeller blades to prevent the transfer of vibrations to the hull.

CCTV cameras have been installed throughout each vessel so that the crew could monitor the interior as well as the exterior without ever leaving the forward helm station.

The new catamaran ferries also feature low-wake wash hulls. Even with the vessels’ regular heavy use, the wakes that they generate will have little adverse impact on the surrounding riverbanks, thereby reducing the risk of erosion.

The Riva Express ferries are scheduled to accommodate commuters between 09:15 and 16:15 from Monday to Friday and are being reserved for day charters for activities including river tours every Sunday. The weekday service includes stops at eight piers. 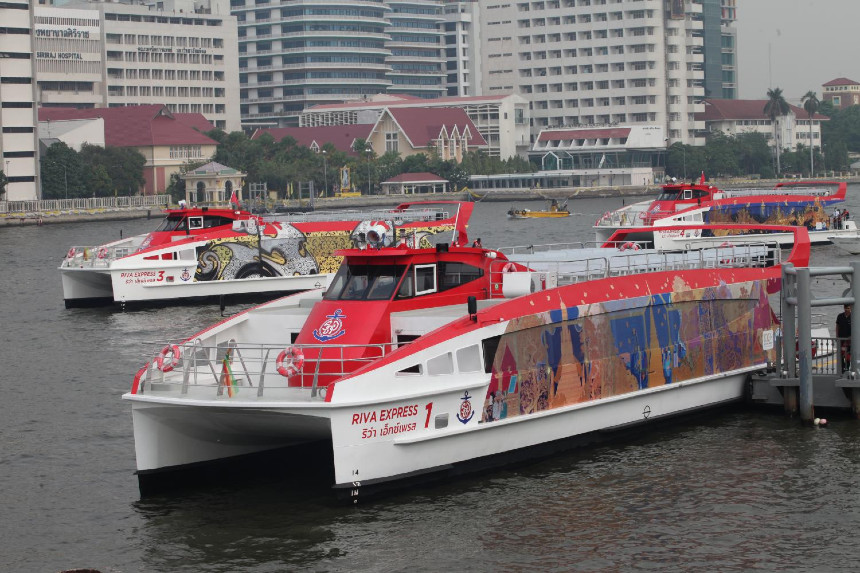