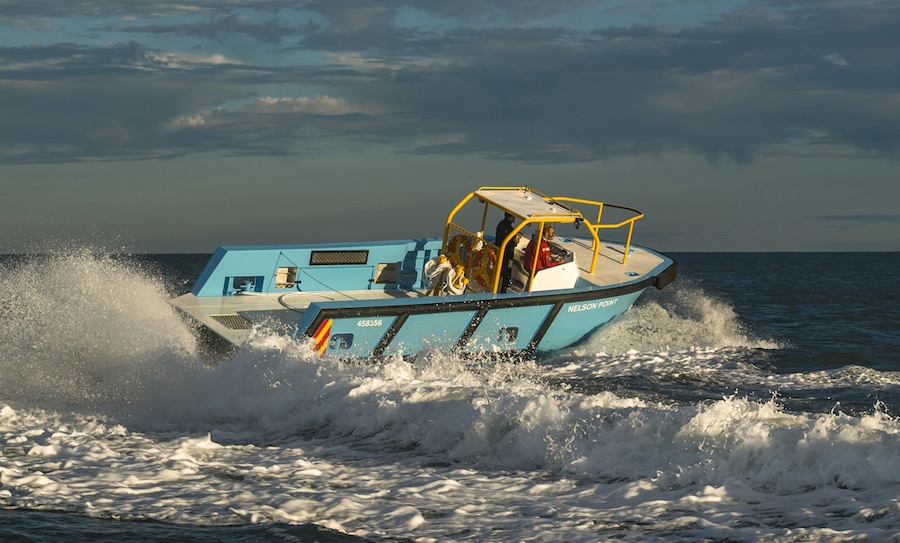 Line boat/utility vessel Jetwave Nelson Point is the latest addition to Jetwave Marine’s owned and operated fleet, which includes nearly 30 specialised commercial vessels including harbour tugs, barges, multi-cats, utility/crew boats, and port service craft. These cater to the requirements of clients in the oil and gas, and resource industries Australia-wide.

Designed by Southerly Designs, the 9.8-metre aluminium workboat can perform a variety of harbour services tasks including line handling, crew/personnel transfer, and survey operations. Completed in late May it went straight to work upon arrival in Port Hedland.

For the primary line boat task, builder Dongara Marine fitted the vessel with a towing crucifix rated to 2.5 tonnes. The two crew sit in a covered protective cage forward of this, with a mesh guard aft shielding against potential lines snap back. The attention paid to minimising the chance of lines getting caught is reflected across the boat in details such as bollards recessed within the bulwarks. 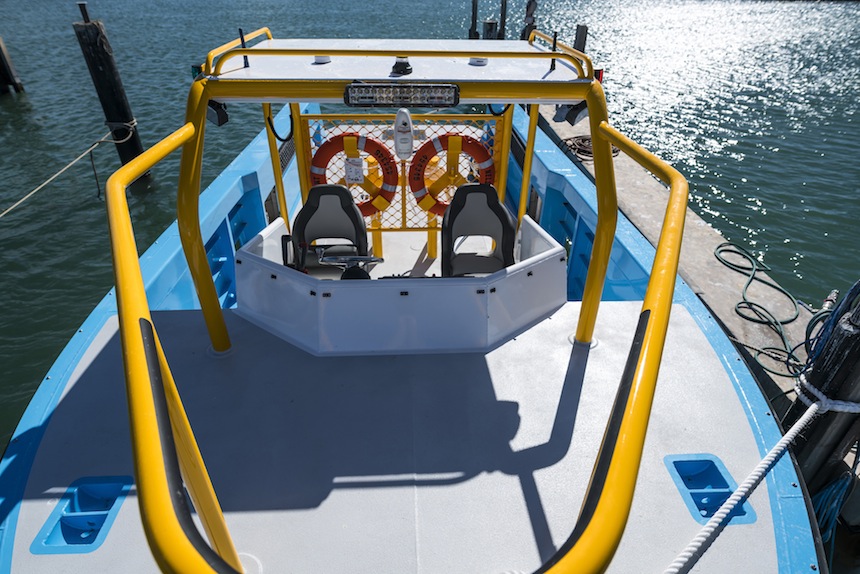 To facilitate crew/personnel transfer operations, fold-down seats for six passengers are integrated into the bulwarks. In addition to handling lines, the flush aft deck with open transom enables carriage of 2.2 tonnes of deck cargo.

As with the previous vessel, the propulsion package consists of a single 272kW Yanmar diesel, Twin Disc gearbox, and a HamiltonJet waterjet. A key reason for selecting the HJ322 waterjet was its combination of towing power, cavitation resistance, and high-speed performance.

This was borne out during trials, which confirmed 1.2 tonnes of bollard pull as well as loaded speeds of 29 knots at full power and 26 knots at 85 per cent MCR. Fuel consumption is less than three litres per nautical mile, and the boat has a 600-litre fuel tank.

While high speed is unusual for a line boat, Jetwave Marine’s Operations Manager, Mick Warren, notes it is an added benefit that also has operational advantages.

“We don’t often use the speed, because mostly we are handling lines. For us, the advantages of using waterjet propulsion in that role are the enhanced manoeuvring, directional thrust, and avoiding having an exposed propeller with consequent entanglement risks,” he said.

“The speed is really a bonus, and it’s certainly good to have when we need to move between jobs quickly, and when transferring personnel.” 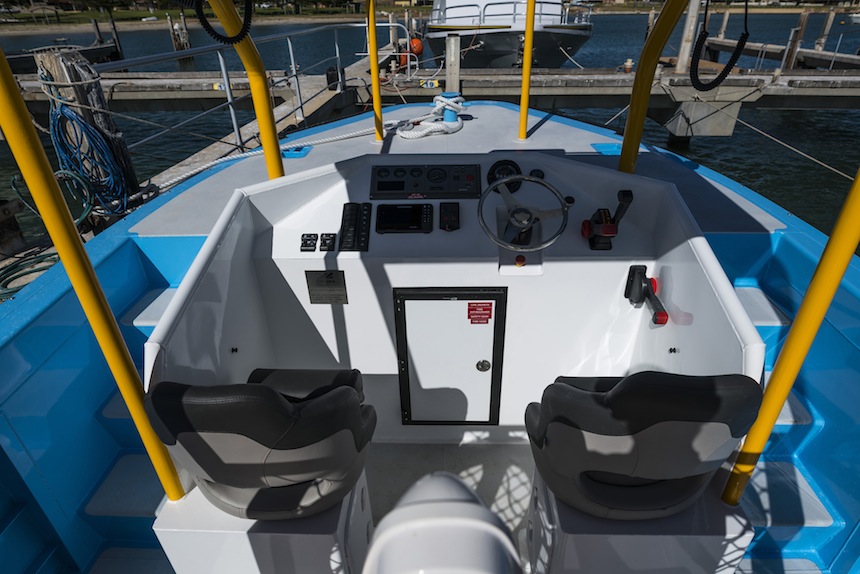 Jetwave Marine ordered the vessel in October 2019, five months after taking delivery of its first newbuild from the Western Australian boatbuilder. That boat, Jetwave Stanley Point, has been successfully working as a line boat/personnel transfer vessel in Port Hedland since May 2019.

While satisfied with Jetwave Stanley Point, the latest project provided the opportunity to make some adjustments based on construction and operational experience.

One change is to the fendering arrangement. “We’ve got a bit less on the bow of this vessel, and we’ve added some on the sides, just to reduce wear and tear on the paintwork and aluminium structure,” Jetwave’s Mick Warren noted.

The new line boat also has more traditional bow and finer forward sections than its predecessor.

“For the first boat we requested the fuller bow shape, and Southerly Designs and Dongara Marine were happy to accommodate that. For this boat we have gone for the more typical Southerly bow shape, one that I am familiar with having grown up in the mid-west,” Mick said.

“As Jetwave Marine’s experience has shown, either bow shape will work well in the conditions typically experienced in Port Hedland’s inner harbour,” added Dongara Marine’s Rohan Warr. “The advantage of the finer bow entry is that it provides flexibility to work in harsher sea conditions, and we certainly demonstrated its ability in waves during trials off the coast,” he said. 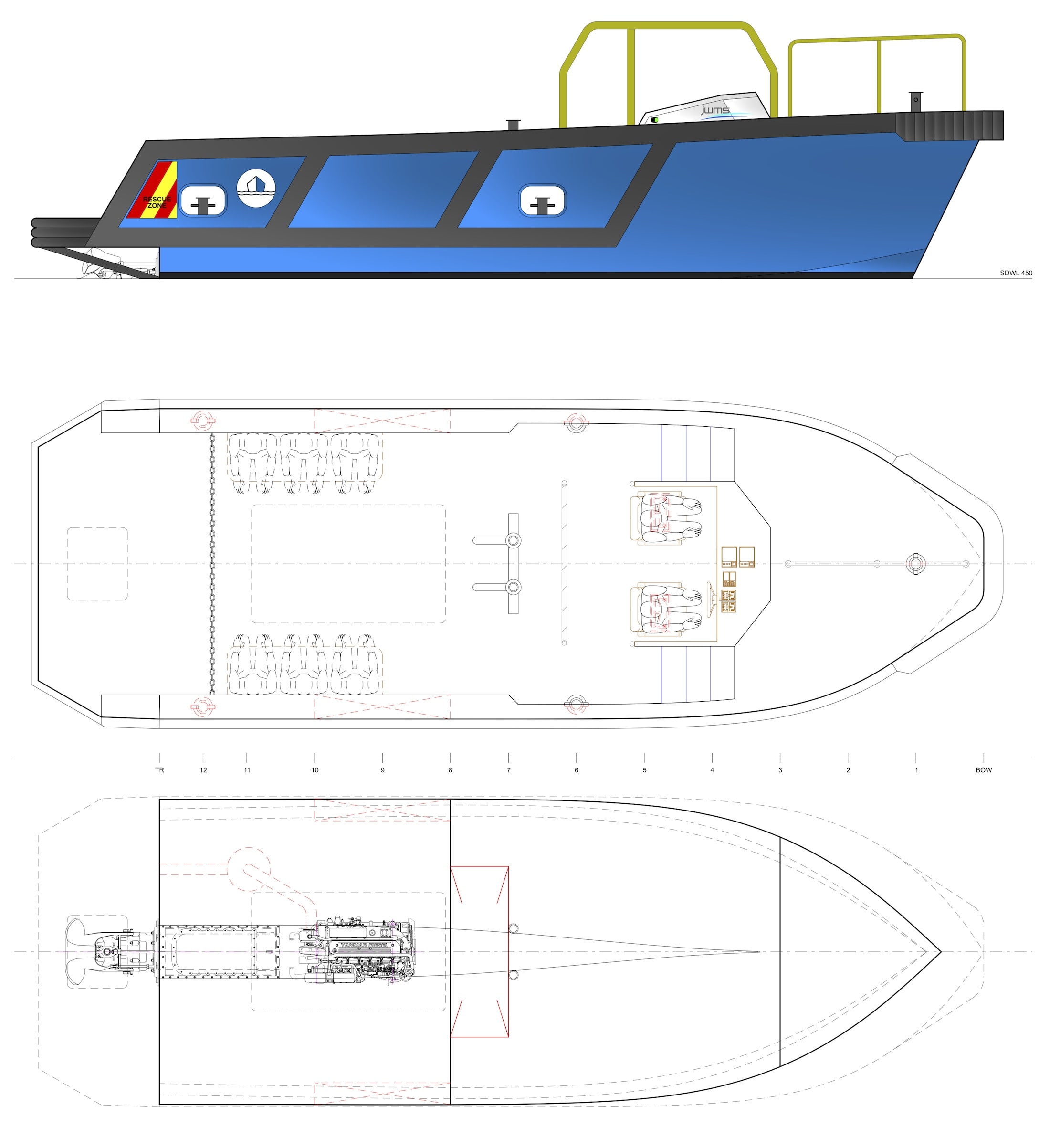