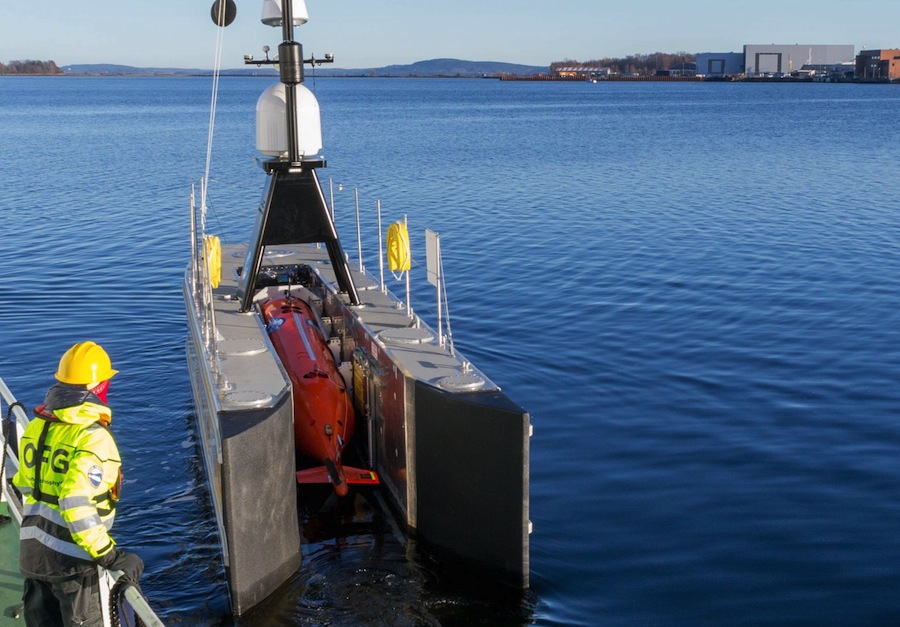 Last week Dutch survey giant Fugro declared war. The battle will be fought by an armada of unmanned vessels operated by remote satellite telemetry in every ocean of the globe. The weapons will be unmanned robotic vessels conducting surveys with both remotely operated vehicles (ROVs) and autonomous subsea vehicles (AUVs), controlled from high tech operations centres thousands of miles away. The prize will be millions of dollars, and leadership of the subsea industry in the twenty first century. Game on!

On March 25, Fugro announced an order for uncrewed surface vessels (USVs) which will be able to deploy both ROVs and AUVs, working in conjunction with Sea Kit International and builder Hushcraft, companies based in Essex in the UK. Sea Kit’s USV was the equipment used by the winning GEBCO-Nippon Foundation Alumni team in the $7 million 2019 Shell Ocean Discovery XPRIZE (here), an oil company funded challenge to prove up the viability of the remote hydrographic surveying technology.

Not surprisingly in a Shell-sponsored competition, there was a bonus prize for unmanned units that could detect and locate a hidden object on the seabed using sensors to detect its chemical signature and home in on it; just the kind of solution needed to identify geological hydrocarbon seeps or leaks from a pipeline.

Fugro’s release was sketchy on how many USVs it was building, the amount of its investment, and the exact specifications of the equipment, but it did confirm that it has already built a global network of seven remote operations centres (ROCs), “to deliver fast, safe and efficient inspection and positioning services, including two new ROCs in Aberdeen, Scotland, and Leidschendam, the Netherlands”, which it said were opened in 2019, presumably for other survey projects with other equipment for existing clients.

Fugro made some bold claims in its press release, namely that, “by the end of 2020, Fugro will be the first company in the world to provide offshore subsea inspections via USVs and ROVs that are operated from onshore ROCs.”

Thus, Fugro CEO Mark Heine has thrown down a gauntlet to upstart Ocean Infinity, a company that has exactly the same ambitions to provide almost identical services in the same timeframe.

At a glittering launch ceremony in early February at the Science Museum in London, Ocean Infinity’s Dan Hook announced the launch of its Armada technology (video here), making the striking assertion that, “Armada will be the largest fleet of unmanned surface robots and most environmentally sustainable company in the industry,” and that, “Armada’s fleet is currently under construction and is expected to be deployable by the end of 2020.”

Ocean Infinity has committed to building ROCs as well, bragging that its USVs, “will be controlled and operated by experienced mariners via satellite communications from state of the art onshore facilities in both Austin (Texas) and Southampton (England).”

Again, the amount of investment was not mentioned, but Ocean Infinity stated that Armada, “will initially add fifteen bespoke designed marine robots to Ocean Infinity’s current fleet of autonomous underwater vehicles,” although it is not clear if this tally of fifteen new builds includes USVs, AUVs or ROVs, or just the surface vessels themselves.

Neither Fugro nor Ocean Infinity provide a listing of how many AUVs they currently operate, although both use Kongsberg’s Hugin AUVs (orders are announced here).

Fugro and Ocean Infinity have a long history of rivalry. Both companies participated in the search for the lost Malaysian airliner MH370 in the Indian Ocean. Fugro signed a lucrative contract with the Australian Government on commercial terms for its vessels Fugro Discovery, Fugro Equator, Fugro Supporter and the chartered in vessel Havila Harmony, winning a tender variously valued at AUD$60 million to AUD$80 million (CNBC coverage here).

Fugro used mainly a combination of conventional towfish sonar hauled behind the vessels, and a small number of AUVs, seemingly two. You can see the Fugro documentary about their mission here.

During the search, one AUV ran into a subsea volcano and one towfish was lost, but later recovered (Wikipedia summary here).

After the initial failure of the Fugro-led search, Ocean Infinity then struck a deal directly with the Malaysian government in early 2018, offering the services of its vessel Seabed Constructor fitted with eight AUVs to conduct the search on a “no find, no fee” basis. Ocean Infinity was not successful in its search, despite six months of effort, but managed to achieve huge amounts of public interest and excitement over the deployment of so many AUVs over such a large area, producing high definition data. Indeed, there is now a Twitter feed now devoted to tracking all of Ocean Infinity’s fleet in the hope it will restart the search again (here).

Momentum is with Ocean Infinity

Commercially, Fugro did best from MH370, but the output from its search gave Ocean Infinity the entry it had been looking for into Fugro’s core oil and gas markets. Soon, Ocean Infinity’s deployment of multiple AUVs from a single subsea support vessel was delivering survey contract with Woodside, Total in Angola, Shell in Mauritania and ExxonMobil in Guyana .

Ocean Infinity also won a long-term contract with Petrobras in Brazil and chartered in the ultra-high specification subsea vessel Island Pride for this contract (here).

The company then continued its remarkable run of high profile subsea discoveries with its AUV armada, finding, in no particular order, the wreck of the German armoured cruiser Scharnhorst sunk off the Falkland Islands in 1914 (here), the lost French submarine Minerve in the Mediterranean (here), the sunken Korean bulk carrier Stella Daisy in the South Atlantic (here), and the doomed Argentinean submarine San Juan (here), as well as rescuing an injured sailor from a damaged yacht (here).

In short, Ocean Infinity was eating Fugro’s lunch, coming from nowhere in 2016 and leaping ahead of the restricted and inefficient towfish technology to multiple AUVs launched from a single vessel. Indeed, by the end of 2019, Ocean Infinity was operating three large ships worldwide, Seabed Constructor, Island Pride and Normand Frontier (here). Now, in 2020, the launch of the robotic Ocean Infinity Armada threatens to make most of Fugro’s legacy survey operations redundant, by offering a radically lower cost option from a significantly higher tech platform.

Fugro’s response was rather like that of the large car-makers when the upstart electric vehicle technology of Tesla challenged them. First it denied the technology, then it dithered, and then it dabbled in looking at the technology, signing a joint venture with the same company that had provided Ocean Infinity’s first generation USVs, L3 ASV of the UK.

It is not known whether the impressive looking USV shown in the computer graphic in the press release was actually ever delivered to Fugro. Only with its announcement of March 25, does Fugro seem to have accepted that it must fight Ocean Infinity with the same weapons, and invest massively to ensure that it can match the capabilities of the newcomer.

Whilst Ocean Infinity and Fugro are throwing millions at the new technology, it is not clear how effective USVs will actually be at launching and recovering ROVs and AUVs completely remotely.

Tests have been carried out in controlled circumstances by the manufacturers under the watchful eye of oil major BP (here), but anyone who has worked with ROVs and AUVs knows how they require constant love and attention onboard between launches to keep them in service.

It is all well and good having a technical team in Aberdeen or Austin watching over the equipment, but how will they be able to intervene physically if something breaks or a tool needs changing or a sensor has failed? Similarly, satellite communications are excellent, but not perfect, with occasional blackspots and signal dropouts.

Nor is it clear how welcoming of unmanned vessels operating in their waters governments around the world will let, let alone fishermen, leisure users, and commercial operators working in the vicinity.

Flying whose flag, following whose laws?

Many questions remain. What happens in the event of a collision with a USV caused by a system failure – is the remote master in the ROC still liable, even if he had no control of the unit at the time?

Neither company has released details of what regulatory system or flag state or class approvals the USVs will operate under. It is one thing to be launching AUVs from a conventional vessel, quite another to be remotely controlling vessels from the other side of the world, and then launching and recovering further subsea units with them.

BP’s observer of the L3 USV and ROV pairing near Plymouth naturally attributed the slow progress in USV operations to a lack of imagination on the part of long-suffering contractors:

“It is an exciting time for the oil and gas industry. The technology is there – imagination is the only thing that can hold the industry back,” said Peter Collinson, Senior Subsea and Environmental Specialist, BP who watched the demonstration of L3’s C-Worker 7 autonomous vessel eight weeks ago.

A robot took my job

For seafarers and ROV pilots, the development of USVs for ROV and AUV work is, undoubtedly, a medium potential threat to their employment. But, so is $30 oil in the short term.

Whilst Ocean Infinity boasts that master mariners will still control its units, and it employs a Rear Admiral as its marine adviser (here), a shift to unmanned operations will revolutionise offshore operations. Fewer personnel mean lower costs, and, in theory, less risk of human injury in the operations. Fugro is right to respond to Ocean Infinity’s challenge: the world’s largest offshore survey company must either adapt or die.

“Sound trumpets! Let our bloody colours wave! And either victory, or else a grave” as Shakespeare wrote in Henry VI Part 3, or see the battle joined here.